Organizers say the "Tuck House," listed at $170,000 on Tuckaseegee Road, will be matched with a buyer soon. 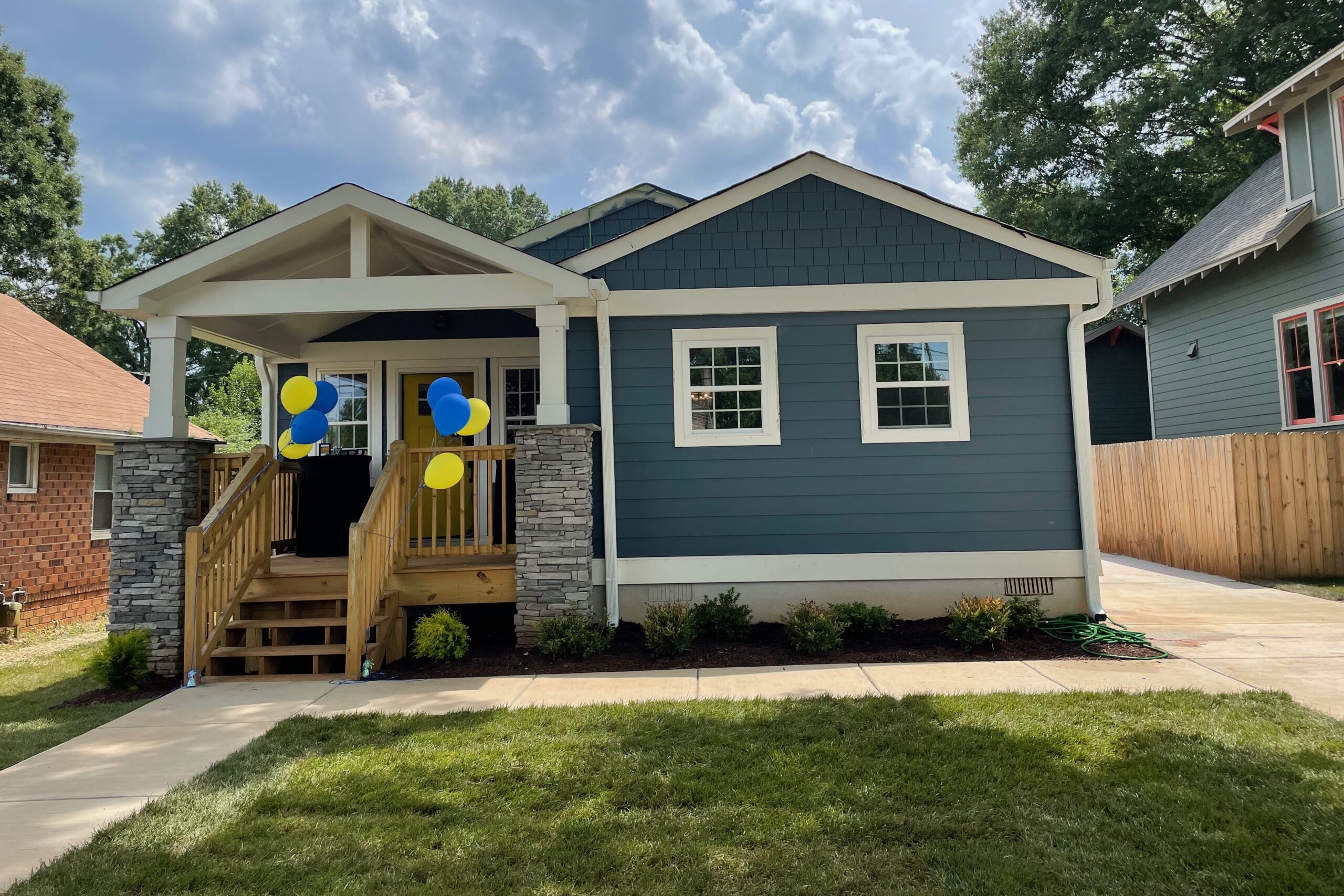 The West Side Community Land Trust unveiled its very first permanently affordable home in Enderly Park during an open house on Friday, part of its ongoing effort to create homeownership opportunities in Charlotte’s historically Black neighborhoods.

Located at 3313 Tuckaseegee Road, the “Tuck House,” as it’s named by the trust, boasts three bedrooms, one and a half baths, a gourmet kitchen, hardwood floors, custom countertops and updated fixtures.

It will sell for an estimated $170,000 and will go to a buyer with income equal to about 60% of the area’s median income (AMI), says Charis Blackmon, executive director of the land trust.

She said the trust has a pool of 70 prospective buyers who are current residents of the west side and are participants in the organization’s home ownership program.

“We have a pipeline of homebuyers for this home and several of our future homes,” she said.

The 1,500-square-foot Tuck Hose was donated in 2019 and was moved from the Sedgefield neighborhood to its current lot.

After almost two years of planning and renovations, the home is now ready for a family to move in.

Blackmon said she’s “relieved and excited” about the home’s completion because it “demonstrates the viability of the land trust model,” which enables families with moderate incomes to stay or live in neighborhoods undergoing rapid gentrification.

Exacerbated by the Covid-19 pandemic, Charlotte is experiencing an affordable housing crisis as rents rise and wages stagnate.

A big contributor to the crisis is the swell of gentrification that has turned once-affordable communities into battlegrounds of bidding wars between real estate investment companies, the affluent and the influx of transplants wanting to live near uptown and willing to pay asking prices that range from $400,000 to upwards of a million dollars.

For some Charlotte natives and longtime residents, the likelihood of remaining in their neighborhoods enveloped by gentrification remains unknown.

As of June 30, about 3,137 people in the county were experiencing homelessness, 77% of which are African American. Other findings include:

The West Side Community Land Trust was created to mitigate housing disparities and inequities on behalf of west side residents in zip codes 28208, 28214, 28216 and 28217.

The model allows for community-controlled organizations to buy land and sell or rent the housing on that land to lower-income households.

Families would own those homes the same as any other buyer, but with a few exceptions: Under the purchase agreement, the trust would guarantee buyers a set rate of appreciation on their homes – 2% fixed rate compounded annually.

Buyers also may sell their homes at any time, but the trust gets a right of first refusal to buy back those properties, thus keeping the unit affordable for the next low-income family.

“The model permanently preserves land and space for community benefit,” said Blackmon. ”It allows us to be able to steward the property forever and ever in perpetuity. It’s on a 99-year inheritable and renewable ground lease, so we’ll be in partnership with our homeowners forever.”

Interior designer Quintel Gwinn, who led the renovations of Tuck House, said the focus was to keep the integrity of the home, while modernizing and maximizing the small space for a family to live comfortably.

That included keeping the original hardwood floors, re-staining and refinishing them, updating the doors and the home’s hardware.

Gwinn said she also found ways to add space on the small home by turning a former outdoor area into a home office, adding a concrete landing pad in the backyard and a newly constructed front porch.

“When you’re working with a small space, those small details can maximize the space and bring in character,” she said.

One of the features prospective buyers may notice about all of the trust’s homes designed by Gwinn, including three more that are in progress, is the color pairings for the exterior of the houses.

She said the original Tuck House home didn’t have much curb appeal, so it was important for the new exterior to be welcoming. For the renovation, she went with a shade of blue for the house and a shade of yellow for the front door.

“In houses that we see renovated, oftentimes we see the same colors and the same color pairings. I’m thinking about how I can make each home unique,” Gwinn said.

Today, the trust has dozens of potential buyers for very few homes, but Blackmon says that won’t be the case for long.

The trust has three additional donated homes that are slated for lots on Gilbert Street, off of Beatties Ford Road. The renovations for those homes are expected to be completed by the end of the year.

Blackmon said the trust also recently negotiated a ground lease deal for a multifamily rental development. “If all goes well,” she said, that project will add 120 additional units on the West Boulevard corridor.

By 2023, based on the trust’s strategic business plan and budget, the trust will have 50 affordable homes and units occupied by families.

J’Tanya Adams, who leads the economic development group Historic West End Partners and is a founding member of the land trust, said the impact of the model in Charlotte will be “huge.”

But in order to sustain the trust’s model and open up a path for wealth building through homeownership, she said, there needs to be more people donating houses and land.

“Instead of tearing these homes down for these beautiful monstrosities that they’re building, I want to see them go ahead and donate those houses and make a difference,” Adams said.

“If you’re not philanthropic, then be business minded,” she said. “Donate a lot and get the write-off. I wish they’ll do it from the heart, but we’ll accept it from the business perspective.”

Correction: The article was updated to correct the home’s selling price and the terms of the purchase agreement.