Dennis, owner of E-Fix Development Corp., is redeveloping two properties in the heart of the Beatties Ford Road's commercial district. 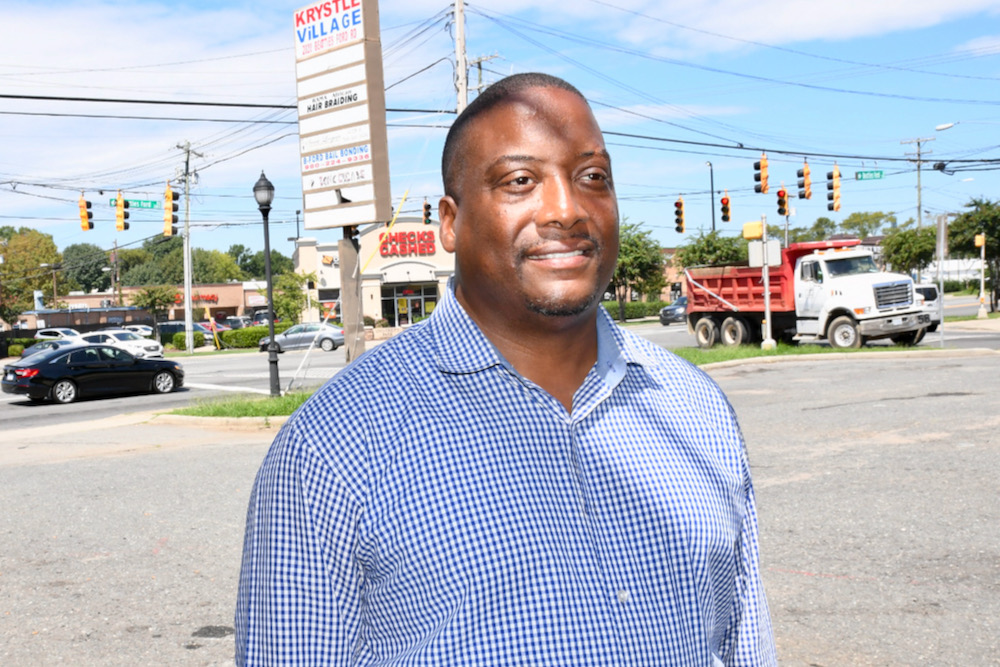 “God gave me a vision,” Christopher Dennis said of the commercial building he bought at the corner of Beatties Ford Road and LaSalle Street. It’s currently under renovation for 7,000 square feet of retail space.

Dennis, who leads E-Fix Development Corp., wants the project at 2023 Beatties Ford Road to give the corridor a new look and take back its legacy.

Decades ago the building housed McDonald’s Cafeteria — not the fast-food chain, but a home-cooking restaurant owned and operated by entrepreneur John McDonald.

Dennis, who bought the building last year, said he was stunned when he found out its history.

“For me, when I read Mr. McDonald’s story, I saw a man who was before his time. He did so much, and I got excited about it. That fueled my passion even more. That’s what’s driving me,” Dennis said.

In April, he also purchased 2020 Beatties Ford Road, a building directly across from his current construction site. He plans to make what he calls Site 2 an extension of the retail at Site 1.

One of the features that will be on both properties are charging stations for electric cars.

“When we first got our drawings back, I said I want to make sure I add the future into this project,” Dennis recalled. “I said, they have the car charging stations in SouthPark and South Blvd; why don’t we have one on Beatties Ford Road?”

Dennis says he envisions a young boy or girl who looks like him walking past the charging stations and saying, “I can own one of those.”

“It’s about setting the precedent,” he said.

JPMorgan Chase & Co. will anchor Site 1 with a bank branch, while BW Sweets Bakery will open a store there — its third in Charlotte.

Rodney Faulkner, the commercial broker in charge of leasing, says competition is heavy for the remaining spaces and that several letters of intent have been signed.

He says he and Dennis want to fill the spaces with businesses the community needs while bringing new options the corridor hasn’t seen before.

“It’s about making sure we have balance,” he said. “On the one side, you’re going to see more neighborhood services, like the bank, and Site 2 is going to be more geared toward food.

For Faulkner, bringing this project to the corridor is personal. It’s where he’s from.

The 1993 West Charlotte High School graduate remembers working at the neighborhood Food Lion, at the nearby McDonald’s fast-food restaurant and eating at a former neighborhood spot called Mr. C’s everyday before basketball practice.

But after returning to his neighborhood after college, Faulkner saw signs of economic decay.

Indeed, the Charlotte-Mecklenburg Police Department has identified the Beatties Ford/Lasalle intersection as one of several crime “hot spots” in the city. Last June, during a block party celebrating Juneteenth, four people died and others were injured when unidentified individuals fired more than 100 rounds into the crowd. No arrests have been made in the case.

In recruiting tenants for the E-Fix projects, Faulkner said he has been mindful of the community’s needs.

Faulkner isn’t the only West Charlotte Lion working on Site 1. The general contractor and two other contractors on the site also are alumni.

“When you look at the people actually working on the development of this building, they all come from this corridor, and I’m proud to say that,” said Dennis, a native of Sumter, S.C., who also owns residential rental properties in the West End.

There’s a lot going on in Historic West End.

This Saturday will see the official launch of “West Complex,” an outdoor activation of food, games and family fun at 1600 W. Trade Street, the site of the former A&P grocery store. (The Duke Endowment recently gave the site to Johnson C. Smith University.)

A block up is the soon-to-be Five Points Public Plaza. The $5.5 million project will be a gathering space for the communities surrounding the intersections of Beatties Ford Road, Rozzelles Ferry Road and W. Trade, an area known as Five Points.

Slated to open at the end of summer, the space will include a small amphitheater, a splash pad, outdoor seating and public art.

For all of the development happening in the community, some are leery of gentrification and the potential displacement it brings.

Tiffany Fant, a Washington Heights resident and community activist, said she’s excited about the “shiny new retail,” but she questions whether these investments are being made for existing residents or the “ones to come who can afford four hundred- to five hundred thousand-dollar houses that are now being built in the corridor.”

“I’d like to have more transparency around the effort, because a lot of this development was based on serving and being here for the Black community,” Fant said of the recent development in the Beatties Ford/LaSalle area.

According to the city’s website, the E-Fix project at Site 1 is slated to get $1.084 million in city funding from the Corridors of Opportunity budget. (Dennis said that while the city has made a commitment, officials are “still working through the details of how those funds will be delivered.”)

Residents in the area also have expressed concern about whether businesses coming to the corridor will bring jobs and livable wages.

Fant says she believes that development can take place in economically deprived areas without leading to displacement, but it requires “bold action” from politicians and the community.

“Once you start beautifying, you can see that typical property tax thing,” she said, referring to rising property values and tax rates. “But that’s where that boldness comes in on the city level. What does it look like to set aside funds for long-term residents to help mitigate that, and not just for people 65 years and older.”

Malcolm Graham, who represents District 2 and Historic West End on the Charlotte City Council, says West End development is a balancing act of change while holding on to the corridor’s history.

He said developers like Dennis, who are stakeholders in the community, can help prevent gentrification because they understand the importance of making sure residents are a part of the change and not victims of it.

“It’s a balancing act that we’re all aware we need to do, but doing nothing is not the answer either,” Graham said.

He added that ultimately this is what the community has been calling for — city and economic investment, wrap-around services, little to no crime, a place where families want to come — change.

“This is a community that has been demanding change for well over 40 years,” he said, “and they’re finally getting it.”

With Site 1 80% done, Faulkner says tenants should be servicing customers by late September.

Also by then, Site 2 should have “significant work” completed. It’s expected to open by early 2022.

Along with the promise of jobs and community resources, Dennis teased plans to do “something special” in one of the spaces at Site 1.

It’s something the West End hasn’t seen before that will pull together community, opportunity and business engagement, he says.

Faulkner and Dennis agree that while they are “reimagining” the corridor, they’re not doing anything new, simply resurrecting its storied past.

“We’re really trying to bring back this greatness that was already in the corridor,” Faulkner said. “Mr. McDonald did it before Chris did it. This place has always been great; we’re just dusting it off again, shining it up and bringing this experience to the people that were already there.”