A key issue will soon be decided as city government prepares to adopt its 2040 Comprehensive Plan. 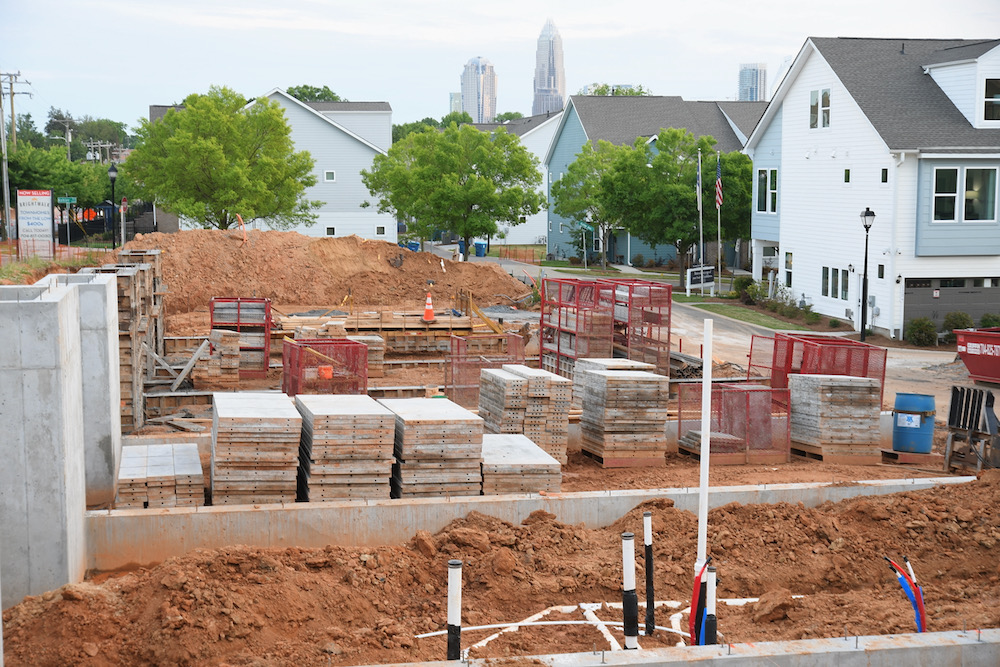 Just outside of uptown Charlotte on Statesville Avenue, where public housing once stood, a developer is building townhomes starting in the low $400,000s. (Photo: QCity Metro)

As some of Charlotte’s historically Black neighborhoods face increasing pressure from gentrification, a group of residents, activists and neighborhood associations is demanding greater input into how their communities will be redeveloped.

Calling themselves the Charlotte Community Benefits Coalition, the groups have banded together to lobby city government for the use of community benefit agreements (CBAs).

CBAs are legally binding documents negotiated between community groups and real estate developers, often with a nudge from city government. Under such agreements, developers often pledge to provide specific amenities in return for neighborhood support of a proposed project.

A provision in Charlotte’s 2040 Comprehensive Plan, now under consideration by City Council, would allow for their use in Charlotte, but the provision faces opposition from some real estate developers.

Coalition members are pushing back.

Without protection from CBAs, some worry that vulnerable Black communities will be left powerless against the might and money of the development industry.

“We cannot lose this fight,” Corine Mack, president of the NAACP Charlotte-Mecklenburg and a coalition member, said earlier this week. “This particular fight is going to affect our children and our children’s children for decades, and it’s going to cause those that are already working poor and poor to be driven into an abyss. We cannot allow this to happen.”

Coalition members say their neighborhoods are especially vulnerable to big developers because of their proximity to uptown Charlotte, plans for light rail expansion and the availability of cheaper land.

At a virtual press conference on Monday, the coalition demanded that the CBA provision be left in the city’s 2040 Comprehensive Plan, which will guide the city’s development as it adds an expected 400,000 people over the next two decades.

Coalition members said the provision is in jeopardy because of intense lobbying by special interest groups.

One such group, they said, is the Real-Estate and Building Industry Coalition (REBIC), which advocates for public policy on behalf of developers, homebuilders and real estate agents.

Ismaail Qaiyim, a member of the coalition of neighborhoods and a lawyer with the Housing Justice Coalition, said REBIC has had “unfettered access” to city officials during the 2040 planning process and was working to kill the CBA provision.

REBIC did not respond to a QCity Metro request for comment.

“Part of the goal of this is to push back against the consistent point they (REBIC) have made, saying CBAs are illegal,” said Qaiyim. “According to the city attorney’s memo on April 21, they are legal.”

In that memo, City Attorney Patrick Baker said CBAs are legal, but he recommended that the city seek “special legislative authority from the general assembly before using CBAs as a regulatory tool in land use decision making.”

While City Council members Braxton Winston and Dimple Ajmera, both Democrats, have openly supported CBAs in the 2040 plan, the council’s two Republican members, Tariq Bokhari and Ed Driggs, have criticized the provision.

During a Mecklenburg Young Republican meeting last month, Driggs called the 2040 plan “basically an attempt at a socialist takeover of the city of Charlotte,” Axios Charlotte reported.

Driggs added that he and Bokhari have been able to stall the plan’s progress because “smart people can outmaneuver dumb people,” according to Axios, which had a reporter in the meeting.

At a City Council meeting, Driggs apologized for his remarks, saying his words were out of “frustration.”

Rickey Hall, board chair of the West Blvd Neighborhood Coalition, said that what the neighborhood groups want isn’t new in Charlotte.

In 2019, when rezoning was happening in the affluent area of Ballantyne, he said, the city’s economic development department negotiated with developers on behalf of the residents.

“The city negotiates on behalf of communities all the time,” Hall said. “It’s just never been afforded to disenfranchised communities, particularly Black and Brown… We want that same level of consideration in terms of the considerable impact with the growth of this city.”

Bobby Drakeford, a local developer and west Charlotte resident who joined the coalition, said CBAs are especially warranted when neighborhood change is driven by government initiatives or tax-funded projects, such as the light rail line.

He said families in historically Black neighborhoods have voted consistently to support various city and county bond initiatives, some of which are now driving gentrification.

“It’s unfair to people to go out and vote for something and let it have such an adverse impact on them,” Drakeford said. “I mean, the light rail has gentrified and cost more people their home than anything in this city, I guess, other than urban renewal.”

Drakeford pointed to the Cherry neighborhood as an example of a historically Black neighborhood where gentrification and displacement were driven, in large part, by tax dollars. That neighborhood, he said, would not have undergone such change without the tens of millions of dollars invested by the city to redevelop nearby Midtown, with its retail shops, greenway and pricey condos.

“I think the whole idea is to say, going forward, we cannot do that,” he said. “First of all, I don’t think people will vote that way again. I doubt that people would vote for something that clearly would threaten the stability of their communities without there being some protection.”

The first draft of the city’s 2040 plan was released last fall for public review and comment. On March 22, a public hearing was held, and the plan came under scrutiny from corporate and community stakeholders.

The City Council will discuss proposed adjustments on May 17. Proposed revisions that get six or more votes will be included in a final draft, which will be released for a two-week public review and comment period, according to a memo sent to City Council by City Manager Marcus Jones.

Council members could vote on the plan as early as June 15.