Groups are reaching out to prospective Mecklenburg County voters, including people whose voting rights have been restored following a recent court ruling. 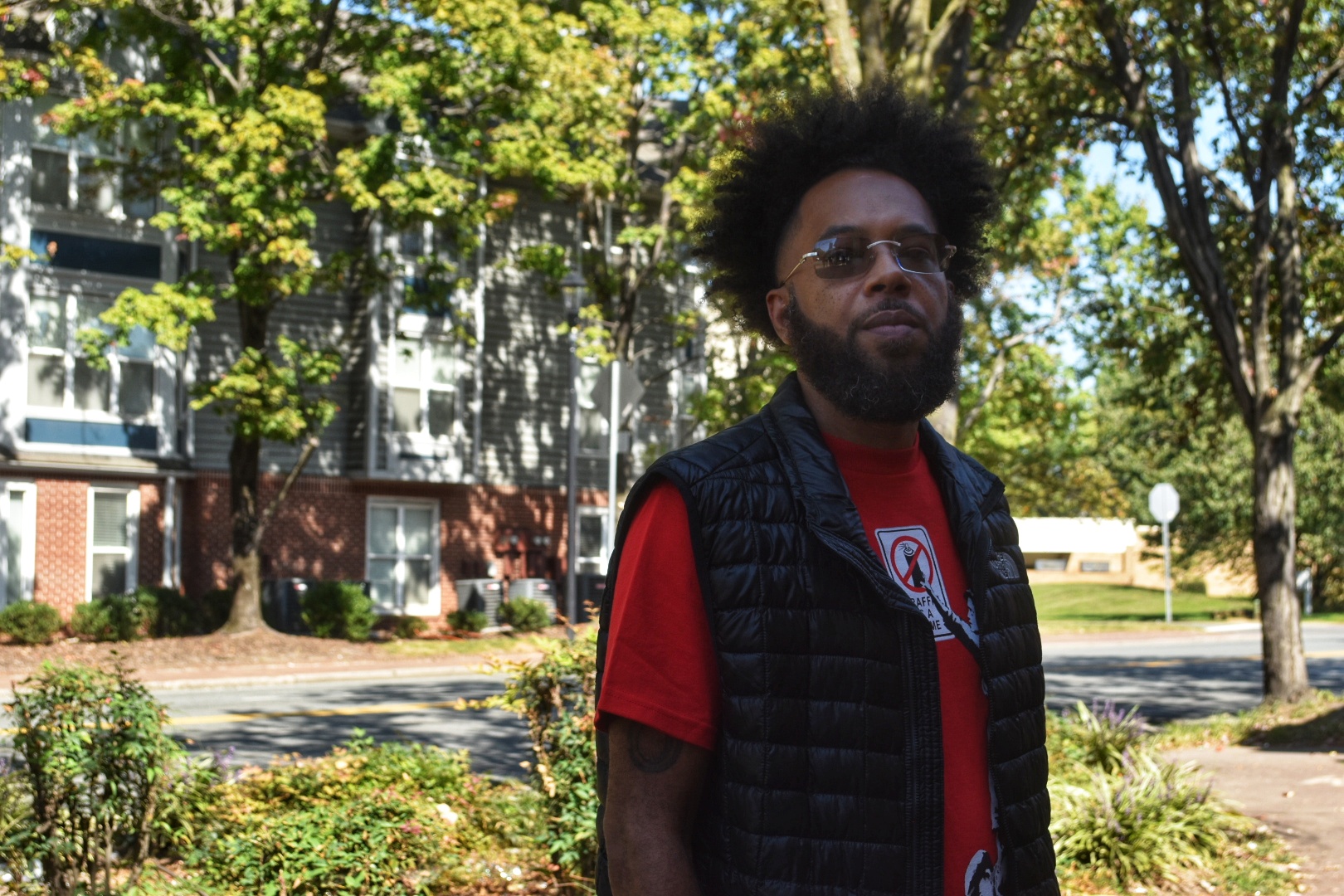 Today is the last day to register to vote in North Carolina, and Omar Onque has been busy leading up to this moment.

A court ruling last month restored voting rights for thousands of previously incarcerated N.C. residents, and Onque, Mecklenburg County chapter organizer for N.C. Second Chance Alliance, has been among those working to reach everyone affected by the ruling to make sure they know they can have a voice in the general election.

Laws determining when and if felons can regain the right vote vary by state. North Carolina is one of 20 states where felons can vote after they have completed their prison time, parole and probation. Previously, state law required felons to pay outstanding fees and fines before being able to register to vote. But that changed Sept. 4, when a three-judge panel of Wake County Superior Court ruled 2-1 that the repayment requirement violated the state constitution.

The ruling is part of a larger legal challenge by groups seeking to re-enfranchise roughly 70,000 North Carolinians* previously convicted of felonies. The plaintiffs are headed to trial to argue that N.C. General Statute 13-1 disproportionately impacts Black communities by violating the Free Elections Clause and the Equal Protection Clause through intentional race-based discrimination.

According to Daryl V. Atkinson, co-director with Forward Justice and a lead counsel for the lawsuit, the September ruling restored voting rights for 5,000 to 7,000 voters statewide. Forward Justice is a nonpartisan law, policy, and strategy center dedicated to advancing racial, social, and economic justice in the South.

Voting as a universal right

More people have been arguing that voting should be a universal right and not impacted by a felony record. They argue disenfranchisement laws have a disproportionate impact on Black people given the systemic racism within the criminal justice system. Black people represent 22% of North Carolina’s total population, but account for 55% of the state’s prison population, according to N.C. Second Chance Alliance, a nonpartisan statewide alliance of people with criminal records, their family members, service providers and others who are involved with the lawsuit.

More than 6 million Americans in 2016 were prohibited from voting due to a felony conviction, according to the Sentencing Project, a group that produces research to support a fair and effective U.S. criminal justice system. Those prohibited from voting included more than 20% of all potential Black voters in Florida, Kentucky, Tennessee, and Virginia at the time.

Political parties are scrambling to secure votes, particularly in North Carolina, which has 15 electoral votes and is thought to be a tossup in the presidential race. The Senate race is also close; North Carolina’s pick will help determine which party controls the Senate.

“Our theory of the case has always been that our democracy is healthier, more vibrant and performs better when there are more people participating,” Atkinson says.

“Our biggest fights in this country have been about who is included in the ‘we’ in the ‘We the People.’ At one point, African Americans weren’t included in the ‘we’. Women weren’t always part of that ‘we’,” Atkinson says. “We set out to expand the ‘we’ through both the lawsuit and through reaching out intentionally directly to impacted voters who can be agitated to participate, register, and vote.”

Atkinson understands what it feels like to lose one’s rights. In 1996, he was convicted of a first-time nonviolent drug crime and sentenced to 10 years in state prison. He was released after 40 months due to good behavior. When he was released, he had a high school diploma. He had lost the right to vote and was denied federal student aid because of his felony record. He credits the support of his family for enabling him to go to school and earn his bachelor’s and law degrees.

Atkinson has been practicing law as a civil and human rights attorney since 2008 and only works with clients who have criminal records. He worked as a fellow with the U.S. Department of Justice and helped the Obama administration with criminal justice reform. In 2014, he was recognized by the White House with a Champion of Change Award for his work on reentry reform issues. Yet, if he returns to Alabama, where he was convicted, Atkinson would not be allowed to vote because of a $50,000 fine levied in 1996 that remains unpaid.

“I am still disenfranchised there,” he says. “I feel these issues because they are really personal.”

Atkinson said Forward Justice and other groups have been filing public records requests and cross-referencing criminal justice-related data with court data and other records to find people who were convicted of felonies at some point but also have been civically engaged, voted or registered to vote in the past. This research has identified more than 150,000 matches, and advocates are trying to contact these people to encourage them to get registered and active in the upcoming election, Atkinson said.

In Charlotte, Onque has spent the summer training volunteers to help with phone banking. Because of safety precautions surrounding Covid-19, volunteers are not canvassing neighborhoods or knocking on doors as they have in the past. He said his focus is spreading awareness and sharing accurate information. Who a person votes for is not his concern.

A Charlotte native, Onque, 36, became interested in working for criminal justice reform after learning about work Forward Justice did to overturn a wrongful murder conviction. Onque began volunteering and was asked to come on board as an organizer.

“Being directly impacted myself, there was something about the work on the case to get the conviction overturned that ignited something in me,” Onque said. “I know my city has so much potential to be one of the greatest cities in the country, and I want to do my part to make sure we’re progressing and we’re including everyone in the process of this growth in the city.”

As of late September, Onque had trained 59 volunteers in phone banking. He intended to launch the N.C. Second Chance Alliance Mecklenburg chapter this summer, but the pandemic derailed those plans. Instead, he focused on recruiting and training volunteers, raising awareness of his group and holding virtual events.

N.C. Second Chance Alliance and other groups recently held an in-person voter registration drive in north Charlotte where Onque was able to secure 212 new voter registrations, including 11 people whose voting rights were restored by the recent court ruling, he says.

“As we know, voter suppression has been a very intense thing that’s gone on in this country for decades,” he says. “Specifically in Mecklenburg County rural areas, voter suppression is at an alarming rate. That’s why these alliances and organizations are important to share information.”

You may now re-register to vote, or register for the first time to vote, if all of the following apply to you:

• You are serving a term of extended probation, parole or post-release supervision;

• You still have outstanding fines, fees or restitution as a result of your felony conviction;

• You do not know of another reason that your probation, parole or post-release supervision was extended.

Want to register to vote?

Today is the deadline for registering to vote. If registering by mail, it must be postmarked by today.

Same-day registration is also an option.

You can register and vote in person at one-stop sites during the early voting period, which runs from Thursday, Oct. 15 to Saturday, Oct. 31. See poll locations here.

Do people convicted of misdemeanors lose their voting rights?

No, they do not. North Carolina residents with misdemeanor convictions can vote, even if the person is incarcerated.

Kerry Singe is an award-winning journalist who spent more than a decade at The Charlotte Observer. She has worked with NBC News Channel, freelanced for WFAE and contributes to a variety of print and online publications.

This Story is Tagged: criminal justice