Part Two of the Black Power Moves series dives into the challenges and opportunities for Charlotte’s flagship Black media companies. 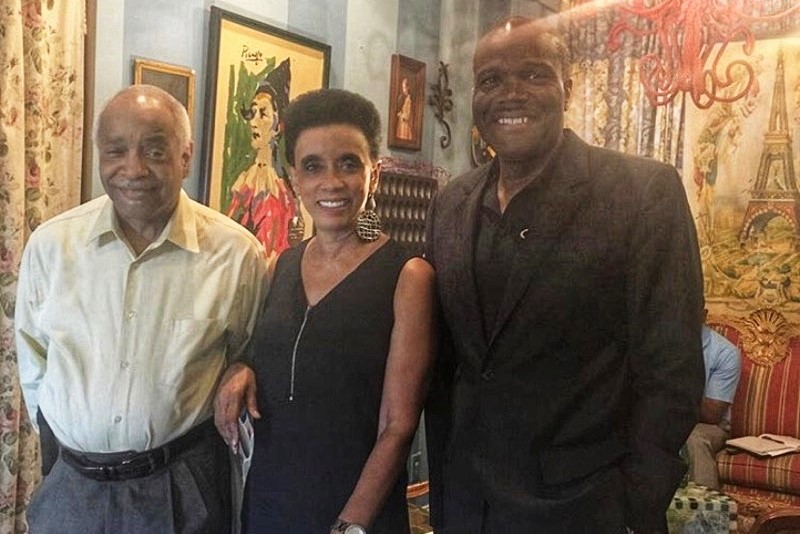 When historic events happen, we rely on the media to capture and document these moments in time. Black media outlets are often tasked with providing a voice for the underserved during these moments.

Rarely do these outlets insert themselves into the story, but the Covid-19 pandemic and the fight for racial equity has impacted Black media significantly, forcing them to advocate like never before about their value.

Three of Charlotte’s longtime Black media leaders have been sounding that alarm for decades.

Charlotte’s longest-running newspaper, The Charlotte Post, was established in 1878 — eight years before the Charlotte Observer. For more than 40 years, the Johnson Family has run the African American-focused weekly publication.

Local journalist Bill Johnson bought the paper in 1974 and became its publisher. Twelve years later, Bill, whose health was failing, asked his son, Gerald, to temporarily take over the role. At the time, Gerald was a Bank of America executive who expected to return to corporate America. But that didn’t happen. Three months after he joined the staff, his father died. Gerald has been at the helm of The Post — along with his brother, Bob — ever since.

Meanwhile, Pride Magazine began as a Charlotte Observer publication nearly 30 years ago. Dee Dixon has been there from the beginning.

She took over as publisher of the lifestyle magazine for African Americans before purchasing it from the Observer in 2001. The independent magazine became a product of Dixon’s media company, Pride Communications.

QCity Metro is the youngest of the trio. It’s the brainchild of Glenn Burkins, a former deputy managing editor at the Charlotte Observer. After an 8-year stint, the veteran reporter left the newspaper to launch QCity Metro in 2008. The platform was one of the first digital-only, hyperlocal publications focused on a Black audience.

Like most traditional media, all three publications relied heavily on advertisers. When the pandemic hit, each faced a serious challenge.

“It caught us completely by surprise,” Johnson said. “We were doing OK until mid-March when the advertising dollars that were committed several months down the road started canceling … stores started closing and advertisers started cutting back on ads. March through July revenue dropped 40%.”

“It took our revenue down to nothing,” he said. “We used to get most of our revenue from helping organizations promote their events. When all those events were canceled, our revenue dried up as well.”

Before the pandemic, both news organizations had already recognized the need to diversify revenue. Last summer, The Post and QCity Metro were accepted into the third cohort of the UNC-Knight Foundation Table Stakes Newsroom Initiative. The yearlong program helps media organizations focus on audience engagement and create sustainable revenue streams.

As devastating as the pandemic has been, it has also presented opportunities. Both publications’ readership increased despite advertising losses. Delivering timely and relevant information to their audiences allowed the publishers to keep the ships afloat.

“We connected with our audience in a much deeper way,” Burkins said. “We were one of the first locally to challenge county health officials on the impact of Covid-19 in the Black community. Our readers demonstratively appreciated that. They came to us for information they weren’t getting anywhere else.”

As a result, more people signed up for QCity Metro’s membership program, the Press Club.

Burkins explained how some major organizations began offering grants to newsrooms covering the pandemic and serving underserved communities. QCity Metro received several grants, one of the largest was $100,000 from Facebook.

As Charlotte Post’s reporters covered the pandemic, the company saw a jump in readership as well. Similar to QCity Metro’s membership, the Post’s subscribers increased. The growth aided in the ad revenue losses.

Selling ad space was already a challenge — the pandemic just added another layer. Black people account for 13% of the population but only receive 1.4% of targeted U.S. advertising and brand activation spending.

“I felt my business was in jeopardy because producing a Black magazine in Charlotte has always been hard,” said Dixon, who produces six issues of Pride Magazine annually.

Requests for public relations services increased, while Dixon noted that some clients were specifically looking for minority-owned firms to provide messaging for conversations around diversity, inclusion and racial inequalities.

Each organization understood the importance of being more than a media outlet for its readers. Over the years, the publishers have hosted galas, concerts, community forums and other events. These events often help residents find solutions to issues raised in stories covered by the outlets. For instance, Dixon held a Covid-19 forum featuring several business owners and community leaders. Burkins has been a regular moderator for the Harvey B. Gantt Center’s “Unmasked” series.

The death of George Floyd in May led to global protests with demands for racial equity and defunding the police. There has been a resurgence of the Black Lives Matter movement, but the Charlotte Post was an early adopter years ago. The Charlotte Post Foundation launched Black Lives Matter Charlotte in 2015 to create a space for Black people and allies to discuss issues that negatively and disproportionately affected Black residents.

‘Black’ is the new Black

The national interest in issues impacting Black communities also trickled down to increased coverage from local mainstream media. It garnered a mixed reaction from the trio of publishers who’ve always centered Black audiences.

Dixon is concerned with the approach and sensitivity of non-Black outlets.

“It seems apropos to cover Black issues now,” Dixon said. “I’ve turned down some media opportunities because I felt like it wasn’t for me.”

She expressed a desire for authentic dialogues that promote change. Burkins and Johnson both shared the belief that the more awareness about Black issues, the better.

“This is nothing new,” Burkins noted. “This is a big news story, and they [mainstream outlets] absolutely need to be part of it. But I wonder, how many of them will be here a year from now or two years from now?”

He continued, “There’s a lot of grant money out there, and it’s chasing organizations covering issues in the Black community.”

“I think we do a good job at what we cover,” he said confidently. “Being a small company, we can’t cover everything that is happening in the city, so I welcome other people coming in and reporting.”

Dixon is ready to take advantage of opportunities for Pride Communications. She believes it’s long overdue for companies to increase advertising dollars spent with Black media, but she’s guarded.

“I’m not going to be deceived about this surge of business or interest. I just need to continue to be innovative as a media outlet,” she bluntly stated. “I would love to say things are different. I would love to hire more people and get more advertising because things are going to get better. I wouldn’t go that far. I just know better.”

Dixon acknowledges those who advocate for Pride Magazine and have supported the publication from its inception.

“Otherwise, we wouldn’t be here,” she said.

Her desire to see more financial support is a message meant for all businesses, including Black-owned ones. Burkins echoed similar sentiments and touched on the giving habits of Black people.

He said, “We give heavily to our churches, first and foremost. We give to our fraternities and sororities, we give to our HBCUs — but probably not nearly enough. Giving to media organizations is not only new for the country, to some degree, it’s especially new for Black news consumers.”

QCity Metro’s advertisers are returning, but Burkins will continue to grow new revenue streams. He’s leary about how quickly the situation could change in an economic crisis and how that might impact Black media.

Johnson has seen a lot in four decades as the publisher of the Charlotte Post. He’s up to the task of solving problems but admits the pandemic has him frustrated.

“I can manage a situation if I know the endpoint,” he said. “The problem that is bothering me more than anything else is we don’t know when this pandemic will end.”

While the uncertainty may hinder ongoing efforts to diversify revenue, according to Johnson, The Post’s advertisers are also beginning to return.

As publisher of the city’s oldest paper, Johnson says his team is taking steps to become more of a household name.

“When my family took over the paper, Charlotte was a very segregated city. Our support basically came from the west side, and we’re still strong on the west side, he said. “Charlotte has become a transient city. We must have the resources to make sure we can follow, track and reach them.”

“It’s important that we stop thinking of ethnic media as a ‘nice to have,’ as something on the side. It’s a must-have.”

Editor’s Note: Black Power Moves, our Black Business Month series, highlights industries and notable members of Charlotte’s Black business community. Part One focused on the response to the coronavirus pandemic and the Black Lives Matter movement from leadership of Black Business Owners of Charlotte and the Charlotte Mecklenburg Black Chamber of Commerce.

This Story is Tagged: protests, coronavirus