Hannah-Jones has given us all one more reason to acknowledge and work to end systemic racism in North Carolina. 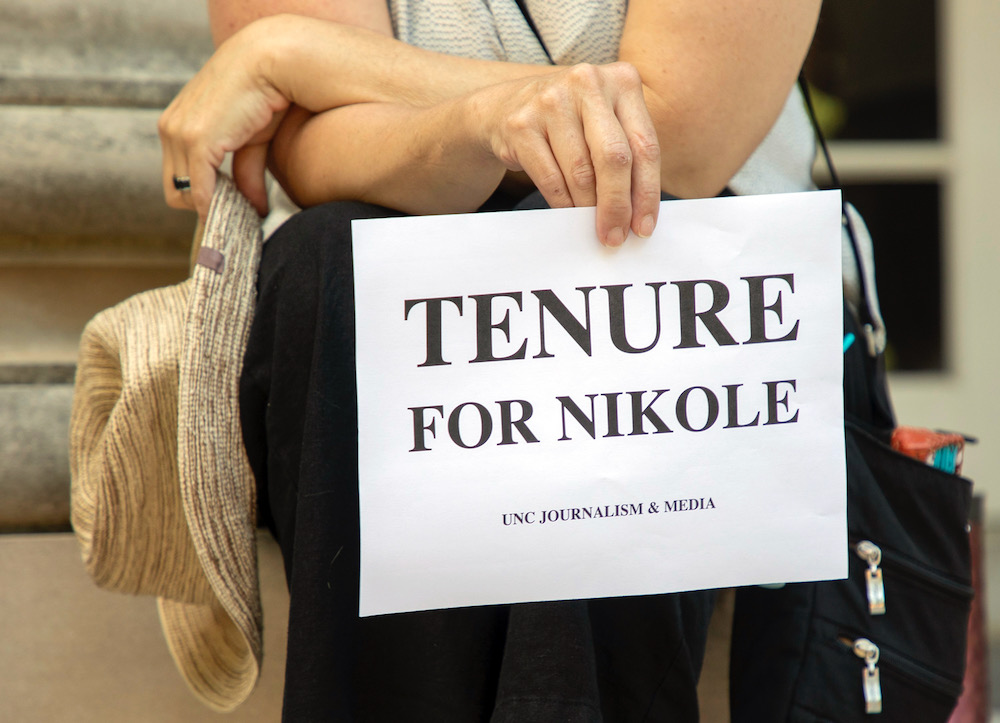 Deborah Dwyer, a doctoral candidate, holds a sign while gathered with fellow students and alumni on the steps of Carroll Hall, where the UNC-Chapel Hill Hussman School of Journalism and Media is located, before the university's Board of Trustees is scheduled to vote on tenure for distinguished journalist Nikole Hannah-Jones, on Wednesday, Jun. 30, 2021, in Chapel Hill, N.C.

Jennifer Watson Roberts is a former Charlotte mayor and former member of the Mecklenburg Board of County Commissioners. Read more of her opinion articles here.

It is heartening to see the recent response to the controversy over the initial refusal to grant Nikole Hannah-Jones tenure at the University of North Carolina.

It has also been painful, most especially to Ms. Hannah-Jones herself, and to many in journalism and academia who can relate to her experiences. But it is encouraging that so many were upset over this injustice.

The fact that the reactions were swift, broad, and covered by news outlets, blogs, and media all over the nation gives me hope that the broader American conscience is being awakened in ways that it might not have been, even a decade ago.

For those who have not followed closely, Pulitzer-prize winning journalist Hannah-Jones was offered a position as the Knight Chair in Race and Investigative Journalism at UNC Chapel Hill’s Hussman School of Journalism, but with only a five-year contract. Unlike every other Knight Chair who had been given tenure with the position, Hannah-Jones was initially denied it because of the discomfort for some, including one very large donor, over the conclusions drawn in her 1619 Project – conclusions that point out the pervasive harm that systemic racism has caused throughout U.S. history.

In line with her research findings, that very system turned against her, as an African American woman, and the concerns raised by influential white men shut the door on her advancement. With mounds of public pressure, the Board of Trustees finally voted to give her tenure, but she decided to accept instead an offer of tenure at Howard University.

In a letter explaining her decision to go to Howard (worth reading), she wrote, “These last few weeks have been very dark. To be treated so shabbily by my alma mater, by a university that has given me so much and which I only sought to give back to, has been deeply painful.

“The only bright light has been all of the people who spoke up and fought back against the dangerous attack on academic freedom that sought to punish me for the nature of my work, attacks that Black and marginalized faculty face all across the country.”

Her words here resonate. As a UNC alumna myself, it was painful to watch all the national attention given to a dark truth about the past and present leadership of our flagship state university.

It is equally painful to hear the stories of continued discrimination that students and faculty of color receive, not just at UNC, but at institutions across the country. But I am heartened by the response. I was encouraged to read the letters, and the op eds, and the voices of the students, faculty and staff at UNC. I saw many people of all races and ethnicities speaking out against the decision on social media, including UNC alumni from all over the world, calling on their alma mater to do better, and to root out the bias that infects it and too many of our American institutions.

Only one current member, Joel Ford, is a Democrat, and his votes have often aligned with Republicans. In essence, the policies of our state university are governed by the General Assembly and its Republican leadership.

When it comes to academic freedom, this is a real problem. In order to change that, we must change our representatives. We have seen how the current General Assembly has increasingly meddled in decisions that should be non-partisan. They have acted to increase and broaden power in ways that run counter to the supposed conservative principle of small government and less government intrusion in our daily lives.

If we are to allow researchers and academics the freedom they need to explore new ideas, discoveries, perspectives and problem solving in an ever complex world, they cannot live in constant fear that their ideas or discoveries will cost them their jobs. I am not saying there are easy answers here, because there is a line to be drawn somewhere when professors expound ideas that incite violence, or racial supremacy, or theories with no peer-reviewed scientific basis. But the writings of Nikole Hannah-Jones did not come anywhere near that line.

I disagree with those calling for a boycott of UNC from donors and alumni. Those in power at the General Assembly would be happy to see our university system decline, because many of them think that higher education gives students too many liberal ideas in the first place.

I cannot presume to speak for the current faculty and students and their difficult decisions. But I can speak from my authentic view as a white alumna who knows that our flagship university works best, for itself and for our community, when it makes diversity, equity, inclusion and justice core values.

Our university needs support on its journey to continue to realize these values, to acknowledge its difficult past, to better support a diverse student body and faculty and to become a leader in inclusive, affordable higher education.

I ask for other alumni to use their voices and their money to support the current and future faculty and students of color in areas of study that they care about. I myself plan to make a large donation to the university along those lines, for a program that will be announced later this year.

I hope others will join me and help bring about the changes we know need to happen, because our state will be much better off with a quality state university system than without one. And finally, those who are concerned about the Hannah-Jones incident now have one more reason to vote this coming year, when every member of the General Assembly will be up for re-election.

Nikole Hannah-Jones has given us all one more reason to acknowledge systemic racism in North Carolina, to work to end it, to pay attention to the power structure, to speak out for change, and to vote.