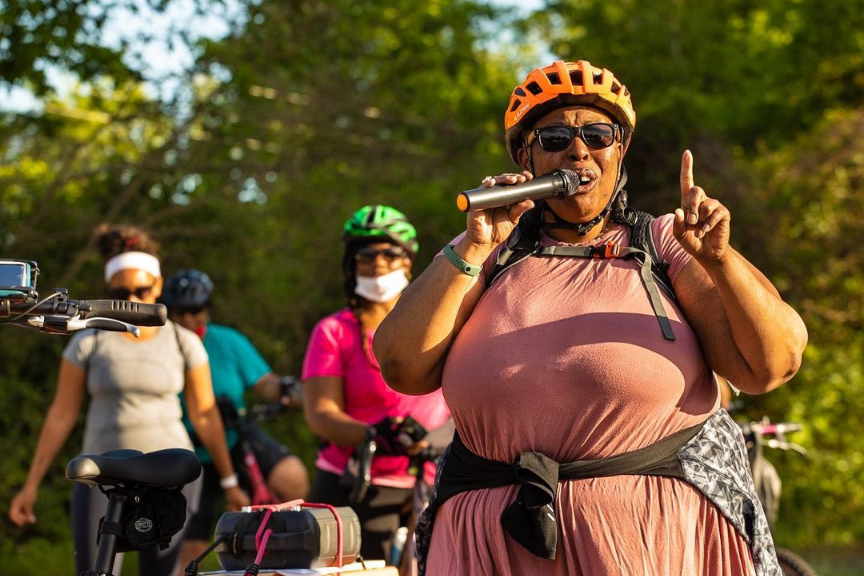 Kenya Templeton grew the concept for The Velo Griot from the biking group she started after moving to Charlotte in 2012. Photo: Lee Flythe Photography

Expect to see more of Charlotte entrepreneur Kenya Templeton and her orange cargo bike that doubles as a mobile classroom she calls The Velo Griot.

Through multiple grants from the Arts and Science Council, Templeton will expand offerings that take riders into communities of color to teach them about local Black history, natural health education and art — three topics she says lack depth in public schools.

The past year has sparked national conversations about social injustice, racism and the need to expand school curriculum to include more Black history. The Velo Griot is providing an opportunity to learn outside of the classroom.

“We don’t have to be dependent on systems that don’t support us,” she said. “It’s important to talk about Black history because so many things dealing with racism are trying to erase that. It’s not just important for Black people to know the history, but for white people to understand where anger and pain come from.”

Templeton’s idea for The Velo Griot was first funded last spring through ASC’s Culture Blocks initiative — a community partnership with Mecklenburg County to provide cultural programming. However, Covid-19 cases were on the rise and in-person gatherings were prohibited. Togetherness is an important part of Templeton’s work, so she returned the undisclosed amount and decided to continue The Velo Griot without it.

“I felt very strongly that people of different backgrounds needed to have the opportunity to be together, to learn this information together, to be able to have conversations,” she said.

With Covid-19 restrictions lifted and backing from Culture Blocks funding, the self-described “historian, musician and performer on a bike” — hence the name The Velo Griot — is making plans for new programming and curricula running this fall from late August through October.

Currently, she’s in the process of updating the classroom on the back of her new bike, which she named Sidola. Her design plans include a microphone, a dry-erase board and a tablet. She received a $5,000 ASC Emerging Creators Fellowship that will support her in this transformation. For now, she uses a karaoke microphone attached to her bicycle.

Though The Velo Griot brand is only two years old, the concept evolved from the biking group she started after moving to Charlotte in 2012, Queen City EZ Riders Slow Biking Gang. Her mission was to get people of color on bicycles for mental and physical health. She moved to the city without a car, heavily relying on her bike for transportation.

On these bike rides, Templeton would share tidbits of information she researched about the histories of Charlotte neighborhoods. At first, her rides would stick to local greenways, but she quickly noticed something was missing.

“Only 10% of greenways in Mecklenburg County connect to communities of color,” she said. “Let’s figure out which Black communities we could bike and show Black people and other people of color, ‘Hey, you can bike in your community.’”

Templeton’s fellow riders were impressed with her presentations and encouraged her to turn the rides into a tour. She grew from about 10 people to 60 people, with her biggest ride hosting 78 riders.

She collaborates with grassroots organizations and bike groups, like Trips for Kids. Later this month, Templeton will lead a lesson in Salisbury with The Pedal Factory, a nonprofit community bike center.

In the future, she hopes to take her mobile classroom into communities of color across the country as a traveling teaching artist. Meanwhile, she’s planning for her seventh neighborhood history tour and new curriculum related to natural health. Classes will be one to two hours and touch on topics like stress, weight management, digestion, haircare, and heart and lung issues.

“As a plus-sized black woman with congenital birth defects and mobility issues, I symbolize that anyone can cycle,” she wrote in an April post on Instagram. “My rides include ALL people.”

Templeton is known in Charlotte for not just her bike tours, but as a jazz singer, actress, fashion designer and market manager at Viva Raw, a juicerery located in 7th Street Public Market in uptown. She said the owner of Viva Raw is very supportive of her bike tours and even sponsored a bike ride earlier this year.

Templeton recognizes she has a lot on her plate but said her plan on how to balance everything is fairly simple.

“Everything has a season,” she said. “For the outdoor season – spring and fall, it’s going to be all about The Velo Griot. If it’s winter, gift season, then I’ll be more about my fashion designing thing.”