The NC Zoo has grown since your last visit, and it’s covid-friendly

Your guide to exploring the zoo, eating, getting around and more. 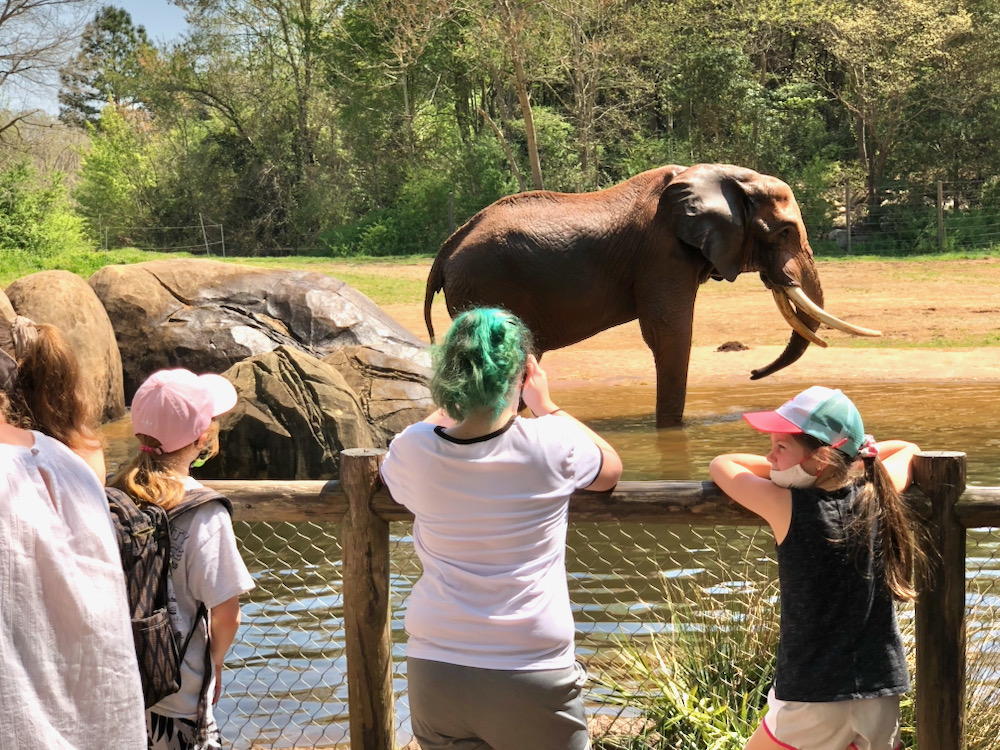 More than a year after the North Carolina Zoo closed because of the Covid-19 pandemic, visitors once again are streaming into the wildlife park for hours of animal watching.

Just a 90-minute drive from uptown Charlotte, the 2,600-acre zoo is home to more than 1,800 animals, mainly from Africa and North America. The park is a five mile loop.

On a recent spring day, adults and small children craned their necks to see giraffes, gorillas and a 47-year-old tusker named C’sar, a massive bull elephant and one of the zoo’s oldest inhabitants.

As the zoo approaches its 50th birthday in 2024, officials say they are especially proud of the park’s educational efforts and the high standards of care provided to the animals there. (The North Carolina Zoo is accredited by the Association of Zoos and Aquariums, the gold standard in zoo management.)

“We want our guests to care about wildlife and wild places as much as possible,” said Moriah Angott, a park official and QCity Metro’s tour guide for the day. “Sometimes you can’t foster that connection or empathy without people seeing the animals up close. That is what our mission is.”

Tip #1. Animals are most active during morning hours, so get there early. (The zoo opens at 9 a.m.)

Tip #2. You’ll do lots of walking, so wear comfortable shoes.

Tip #3. Face coverings are required for zoo entry and throughout the zoo.

The zoo is divided into two themed regions — North America and Africa. Separating the two is Junction Plaza, a pedestrian mall filled with restaurants, shops and seasonal attractions. (See map)

In Africa, people on safari often talk of seeing the “Big 5” — lions, leopards, Cape buffalo, elephants and rhinoceroses. The N.C. Zoo has three of the Big 5, missing only the leopards and Cape buffalos.

That said, what the N.C. Zoo has that you won’t see on any African safari is a family of western lowland gorillas. Chris Goldston, who supervises that family of primates, said gorillas are remarkably like humans. They are subject to many of the same diseases and require exercise and low-fat diets to keep their hearts healthy. And as with humans, females tend to outlive their male companions.

Fun Facts: Gorillas at the N.C. Zoo get regularly scheduled electrocardiograms (EKGs) to monitor their heart health. The females are given birth control pills to prohibit unwanted reproduction.

The Africa Region of the zoo is home to a host of species — chimps, ostriches, antelopes, zebras, lemurs and red river hogs, to name a few.

The Africa habitats are laid out along a one-mile loop, so plan to spend two to three hours there if you want to see everything.

Fun Fact: C’sar, the bull elephant, is the 27th animal acquired by the zoo.

She described the elephants as extremely smart, with intelligence on par with that of a small child. Many zookeepers who work with elephants have degrees in psychology, she said.

Male elephants under human care typically live into their 50, so C’sar, at age 47, was described as being in his “geriatric years.”

Though not as exotic, perhaps, as the Africa Region, the North America Region of the zoo has plenty to see.

The “prairie,” a habitat that’s home to bison and elk, was among our favorite stops in this region. To the east of the prairie is a grizzly bear habitat, and to the west is a black bear habitat.

On a hot day when your feet are tired, take a break from the sun at “Streamside,” an indoor habitat that felt welcomingly familiar. This habitat includes otters, a variety of fish, snakes, bobcats, hellbender salamanders and other species you might find in the North Carolina woods and streams.

Less familiar (but a pleasant surprise) was the polar bear habitat, where a giant white bear wallowed in the grass just feet away while visitors rushed to snap pictures.

Fun Fact: Polar bears can sniff out a seal, their primary prey, from 20 miles away.

The North America Region is laid out along a linear path that’s about one mile long, so plan to spend two to three hours there.

The zoo has a host of restaurants scattered throughout, each with a different menu, and each with vegetarian options. Because of the pandemic, officials have closed indoor dining, but visitors can order using their mobile phones.

If you get tired of walking, a tram shuttles visitors from the North America region to Junction Plaza on a regular schedule. And new this year are individual scooters (covered in fabric to look like fun zoo animals) that visitors can rent.

Not everything is covered by your admissions ticket. To help support the zoo and to keep the cost of entry low, the zoo offers some attractions that cost a few dollars extra. They include a butterfly garden and a platform where guests can feed the giraffes. The zoo also offers a variety of tours at various price points.

Check the zoo’s website for ticket availability. Because of the pandemic, visitors are admitted into the park in 30-minute windows to avoid overcrowding. A recent visit to the website showed some Saturdays and Sundays sold out.

Advanced reservations are required to visit the zoo, even for zoo members. Masks and social distancing are also required throughout your visit.

Work is underway to build a third region of the zoo that will feature animals from Asia. Zoo officials said they hope to have the first phase of the Asia Region finished in time for the park’s 50th birthday. Beyond that, plans are underway for an Austrian region and an Amazon region.