The structures, rich in Black history, will be used to supplement affordable housing in the city's Lakeview neighborhood. 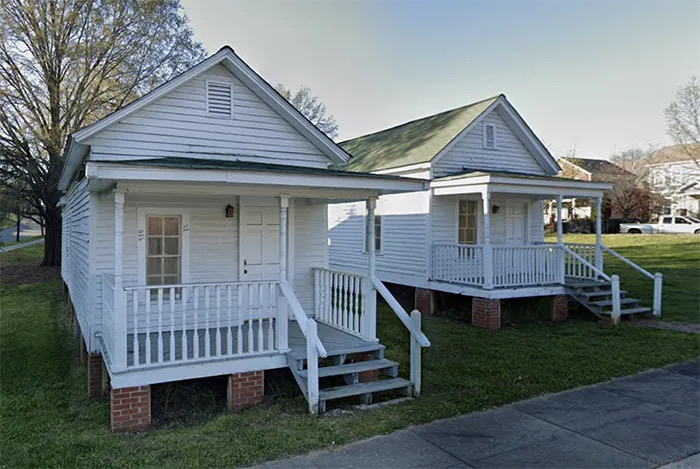 For 35 years, two shotgun-style houses have stood at the corner of East Seventh and North Alexander streets, symbols of a Black history unceremoniously erased from uptown Charlotte. Now the clapboard structures are about to be repurposed — this time as part of an affordable housing concept in the city’s Lakeview community.

Last week, the Harvey B. Gantt Center for African-American Arts + Culture signed papers deeding both structures to the West Side Community Land Trust, a nonprofit seeking to create “permanently affordable housing” in a part of town that is being rapidly gentrified.

The houses, designated as historic properties by the city in the 1980s, will be moved to two parcels of land in Lakeview, where the land trust is preparing to pilot an “accessory dwelling unit (ADU)” model. West Side CLT will build two single-family homes for families earning 60% to 80% of area median income (AMI) — between $50,100 and $66,800 for a family of four. (See the city’s AMI chart)

The shotgun houses, which will be renovated but historically preserved, will sit behind the new construction, allowing the new owners to rent them out at rates affordable to the community, Charis Blackmon, executive director of the land trust, said in an interview this week.

The plan, Blackmon said, is for the shotgun units to be “permanently affordable” and rented to individuals earning less than 60% of AMI. (Blackmon said the land trust is still exploring the nuances of its ADU program in preparation for the sale of these units.)

David Taylor, the Gantt Center’s president and CEO, said he and his staff for years had been looking to transfer ownership of the shotgun houses, but only under the right conditions. The historic homes, he said, “speak to the life of Black folks at a certain time in history.”

“This project will keep the historic integrity of the shotgun houses, but at the same time repurpose them as a place for someone to be able to live, which I think is a really important story,” Taylor said.

A piece of Black history

The houses were moved to the city-owned land in 1985 from their original locations on Bland Street, adjacent to the SouthEnd and Wilmore communities. For years thereafter, the buildings were used by the Gantt Center’s predecessor, the Afro- American Cultural Center, to educate visitors about Charlotte’s rich, Black history.

On Monday, workers were preparing the buildings for their move to west Charlotte. Their front porches and railings had been torn away, and large, steel beams had been underneath their wooden frames.

Shotgun homes, defined by their clapboard siding and long, narrow design, were once a staple in Black neighborhoods in uptown Charlotte and throughout the South, said local historian Tom Hanchett. Many existed in substandard conditions, he said, even for that era.

Most of the shotgun homes in uptown Charlotte were destroyed in the 1960s and ’70s when city leaders displaced entire Black neighborhoods under the banner of urban renewal. The two homes that were moved to First Ward are among only a few that remain.

When designating the houses as historic properties, the Charlotte-Mecklenburg Historic Landmarks Commission said the structures probably were built in the late 1890s; it described them as “an important component of Afro-American culture, both in Charlotte and throughout the Southern United States.”

“To be able to engage in a project where we are able to actually and tangibly preserve relics from our history and keep them from being demolished is just a powerful experience and a powerful narrative to be able to share,” said Blackmon.

Black said several organizations came together to make the plan work, including the city of Charlotte, which gave $49,000 to help buy the Lakeview parcels and has committed to give $70,000 toward the cost of moving the houses.

The West Side Community Land Trust was created to preserve affordable housing in west Charlotte communities where gentrification was displacing longterm residents. Under its business model, the trust buys land and builds homes deemed affordable for low-income families.

The families own their homes the same as any other buyer, but with a few caveats: Under the purchase agreements, the trust would guarantee buyers a set rate of appreciation on their homes – 2% for the first five years, then 3% for each year thereafter.

Buyers may sell their homes, but the trust gets a right of first refusal to buy it back, thus keeping the unit affordable for the next low-income family. The homeowners also agree to leave behind a portion of the property’s appreciated value.

Blackmon said the land-trust model is designed to create individual wealth for low-income families but more so “community wealth” that builds and preserves entire neighborhoods.

“We see that across our communities, the people, the groups, the neighborhoods that are most affected by gentrification, by displacement, by crises like that of the Covid-19 pandemic, are Black and Brown people and people of color,” she said. “So how do we address that in a capitalistic society? We’re looking at addressing that through a community wealth-building model.

Blackmon said the land trust is testing and concept, with a goal to produce 50 permanently affordable units over the next five years.