CGE Venture Group is planning for retail and office space, a restaurant and a rooftop terrace overlooking uptown Charlotte. 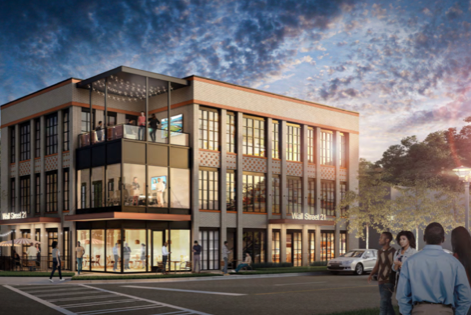 CGE Venture Group is bringing a three-story, mixed-use development to the corner of Beatties Ford Road and Booker Avenue in the Washington Heights neighborhood. West Charlotte native William Hughes is one of seven investors behind the project.

The 5,642-square-foot development, located at 1101 Beatties Ford Road, is slated for retail space, a first-floor restaurant with outdoor seating, and a rooftop terrace overlooking uptown Charlotte. Flexible office space will be available on the second and third floors, and there is an opportunity for naming rights of the building.

CGE Venture Group was created to invest in neighborhoods that have historically lacked investment due to systematic racism via redlining and other problematic development practices. Hughes said this is significant because it has been more than 30 years since development of this nature has come to the community.

“There has not been any other private investment of this sort on the Beatties Ford Road corridor in this area for decades,” he said.

The development falls within the boundaries of the City of Charlotte’s “corridors of opportunity” initiative, a $24.5 million investment into six main thoroughfares in underserved communities. City officials launched the initiative earlier this month, announcing Beatties Ford Road as the first development area. The Booker Avenue site will be located near the Phase 2 extension of Charlotte’s CityLYNX Gold Line and a stop on a future phase that extends to the Rosa Parks Transit Center.

CGE Venture Group aims to create a public/private partnership with the City of Charlotte. Councilman Malcolm Graham, who represents the area, says the city is in the beginning stages of due diligence.

“I’m extremely excited about the development. This group is what we’re looking for,” he said. “William is from the community and is investing in the community. And the residents want what he’s building.”

Graham addressed concerns about displacing neighbors, noting the group’s connection to the west Charlotte community as a way to reduce gentrification.

“The goal in bringing these developments is to not price people out,” he added. “People deserve clean, safe neighborhoods.”

Hughes believes that some have used the term gentrification to scare Black residents into not demanding better development and resources for their communities in fear they’d be priced out when new developments are built. He said the property values are lowered in Black communities from slum and blight, allowing the properties to be bought at a lower price by people who don’t care about the neighborhoods.

“I think that we have to be very aware that gentrification is oftentimes used as a method to paralyze us and to create greater fear and get us complacent with not having investment in our communities,” he said.

The coronavirus pandemic hasn’t caused delays, according to Hughes. CGE Venture Group projects construction will begin early next year with tenants moving in by early 2022.

Hughes, who bought and now lives in his grandparents’ west Charlotte home, said he shares this milestone with everyone in west Charlotte because they played a role in the project coming to life.

“This is all for our baby. This is for everybody that lives in the corridors … because we’ve all been poked and prodded over the last several years about what we want in our community,” he said.

“And the venture group, which I’m part of,” he added, “we’re acting as, I would say, as somewhat of a tool to bring to fruition these things that we all want and desire. We want development in our community.”