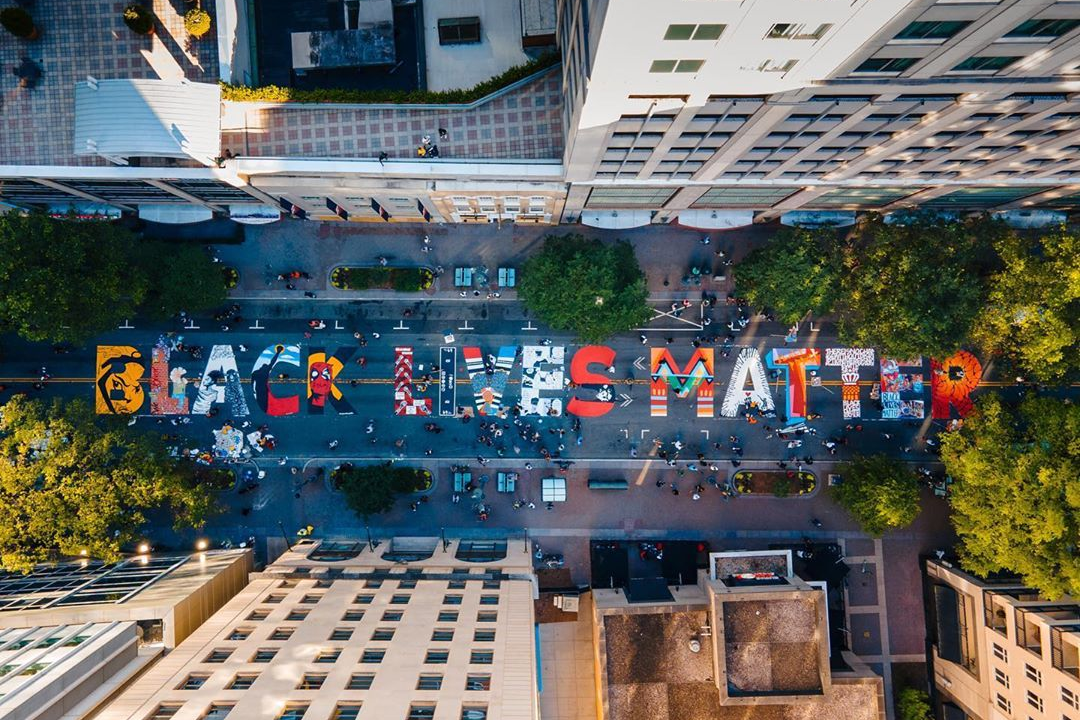 Eleven days after Charlotte protests began in response to police brutality, 17 local artists came together Tuesday in uptown to create their interpretation of the chant yelled over and over again. A Black Lives Matter mural covers a block of Tryon Street between Third and Fourth streets, inspired by similar artwork unveiled Friday in Washington D.C. on 16th Street NW directly north of the White House.

Muralist Georgie Nakima, whose colorful geometrical creations are featured across the city, said it’s important to have art that represents the political climate happening right now.

“Hopefully, as we continue to gain momentum as a collective, we have some policies being changed to support what our desires are as a people,” she said.

Dammit Wesley, co-owner of BLKMRKTCLT gallery/studio, said the world has reached a boiling point with the government and other systems. Facing unemployment rates that have grown to record numbers due to the coronavirus pandemic, he explained that “people have time to be mad, and they were already mad about so many other things prior to this.”

He believes it’s a ridiculous notion to have to tell people that his life matters. However, he’ll keep raising his voice until it’s no longer necessary.

“If my money matters, my taxes matter, if my co-signs to your business matters, then my life should as well. You would think all that goes hand in hand,” he said.

The mural project was a collaboration between the City of Charlotte, Charlotte Is Creative, Brand the Moth and BLKMRKTCLT. Each artist received $500 and supplies at no cost, according to Taiwo Jaiyeoba, assistant city manager and director of planning, design and development.

Wesley said planning moved quickly with almost 12 hours to assemble the team on Sunday and another 12 hours to submit mockups to the City for approval on Monday. Each letter was designed by a different artist.

More than half of the group were Black artists, and Wesley hopes that the attention increases exposure and opens more doors to paid gigs — longtime issues in the creative community and part of the economic equality that Black artists say is long overdue.

“And Black artists are very aware that being selected is super arbitrary and predicated on partial understanding of the work,” Jemison added.

With strength in numbers, and a national spotlight, the artists say now is the time to speak up.

“We have 12-plus Black artists working on it [the mural] simultaneously. If the City is willing to put their neck on the line to have Black people make art in the middle of the street, then why can’t you, as a business that serves everybody, have Black people [create art] on your walls?”

Here is the complete list of mural artists and their letters: