“Live from the Print Shop,” a new stage for Carolina creatives 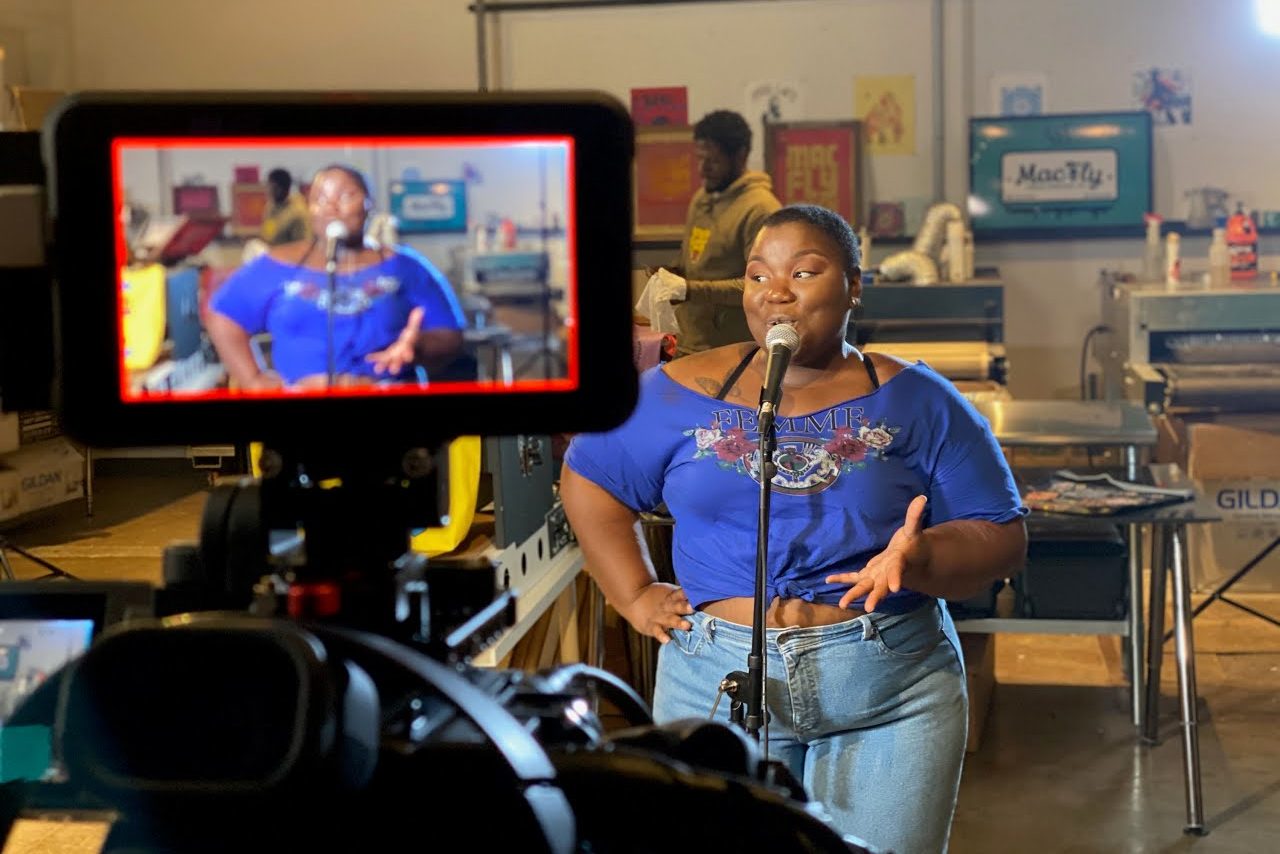 Spoken-word performer Reauxz Brown is one of the early guests scheduled to appear on "Live from the Print Shop." Photo courtesy of Terance Murray

Call it a mashup between NPR’s Tiny Desk concert series and a live lounge performance where you leave with a gift at the end, or call it something else. Come May 1, music lovers will have a new place to enjoy sounds from local artists – with a twist.

Rhasaan Smith, Terance Murray and MacFly Fresh Printing Company have collaborated to create “Live from the Print Shop,” a new space for performing artists to reach audiences in the comfort of their homes. What began as a concept for live performances at MacFly Fresh’s print shop at Camp North End has quickly transitioned into a virtual soundstage to support creatives during times of Covid-19.

The concept is inspired by NPR’s Tiny Desk concert series, which features artists performing live from a tiny desk at NPR’s office building in Washington, D.C.

With “Live from the Print Shop,” performers present their songs accompanied by a four-piece band. In the background, the MacFly team simultaneously creates a logo and custom t-shirt based on the song lyrics. The artist – and their supporters – can take home a one-of-a-kind memento from the performance.

“Rhasaan is the idea person,” said Murray, who handles the technical and production aspects of the show. “He created the concepts for our television shows, and he’s the one who started to grow Live from the Print Shop.”

Smith and Murray met in the early 2000s while working at local radio stations Power 98 and WBAV, respectively. Both brought an entertainment background that would lay a foundation for Live at the Print Shop.

After graduating from Temple University and the Art Institute of Philadelphia, Smith began his career in New York as a second assistant cameraman working on productions such as the 1990s hit TV series “New York Undercover,” the acclaimed “Saturday Night Live” and 1995’s thriller “12 Monkeys” starring Brad Pitt. He also worked with renowned music video director Hype Williams shooting projects for groups like Naughty by Nature.

Seeking a fresh start, Smith relocated to Charlotte in 1998. That move put him at Power 98 and in the path of Murray, a production intern at WBAV at the time.

Murray had moved from his native Virginia in 1997 to attend Barber-Scotia College, a historically Black college in Concord. A self-described “old soul” with a penchant for black-and-white photography, Murray was an early proponent of digital video production.

He said, “In 2001, radio [executives] did not understand the digital world for production and video. I would propose video, and no one understood my process at the time. I feel like I was a pioneer in that instance.”

Upon discovering their joint love for film, the duo teamed up years later to create the music video TV show “City Heat” hosted by their radio colleagues Janine Davis and Eddie Owens.

Live performances and a printing press

He felt like another outlet was needed for independent artists to showcase their talent. Spaces in Charlotte were dwindling.

“There’s an influx of artists on the scene who are from the North and South Carolina region,” said Smith, who now lives in California. “I have always been a fan of the Tiny Desk series and wanted to create my own version of it. I’m always looking for a way to create something different and new.”

Murray reached out to his brother-in-law Eric Ndelo, founder and creative director at MacFly Fresh Printing Company, in search of an innovative space for the project. A print shop in an up-and-coming location was the perfect place to host.

The May 1 premiere episode will feature singer-songwriter Jason Jet, a known voice in Charlotte’s music landscape. Jet has opened for recording artists like Anthony Hamilton and Dwele over his 20-year career.

“It’s a creatively cool concept that will inspire your individual expression,” he said.

Spoken-word performer Reauxz (pronounced Rose) Brown is slated to perform later in May. The Johnson C. Smith University theatre major was scheduled to graduate this spring. However, her graduation date has been tentatively moved to the fall due to the Covid-19 pandemic.

Brown feels like Live from the Print Shop will be a hit and was instantly drawn to the project.

“It allows art forms to collaborate,” she explained. “It allows artists to be themselves and showcase their gifts.”

After repackaging the program due to the governor’s extended stay-at-home order, the team expanded the concept to include a poetry series entitled “Live from the Print Shop Presents…” that will be hosted by Charlotte’s Emmy Award-winning poet Boris “Bluz” Rogers.

Rather than a live band, participants in this version can perform a capella or with acoustical background music. The series will also include a television program featuring music videos of local artists. A podcast will be rolled out later this year.

Fans can expect a few surprises in the upcoming lineup, including some national acts. The show is open to local and regional artists who already have a catalog of music.

“We welcome anyone who is talented and artistically soulful. Our [audience] demographic is music lovers ages 12 to 54, so we are not looking for anything too vulgar or hardcore, just people interested in good music,” Smith stated. “We want to make sure the music is family-friendly and tasteful.”

Still, showcasing great music is what matters most.

As Murray puts it, “Music is the soundtrack to the world, and we all can relate in some form. I want artists to walk away from our program with an actual professional performance and a t-shirt to promote their work.”