What started as a creative writing project in college blossomed years later in a debut novel for this Charlotte educator. The early reviews have been glowing. 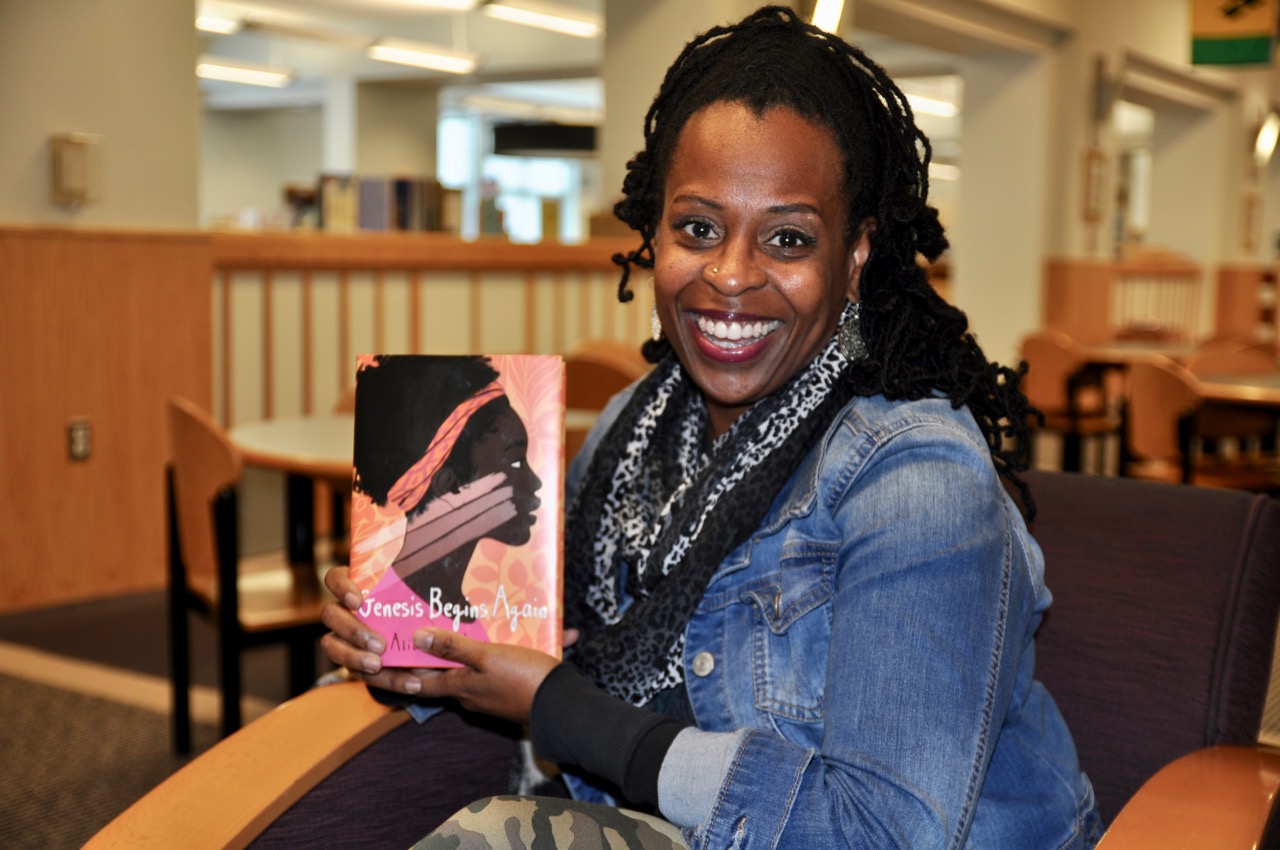 The New York Times called it a “stunning debut novel” and compared it favorably with Toni Morrison’s “The Bluest Eye,” “but appropriate for a much younger audience.”

Not too shabby for a woman who frequently questioned her own ability to complete a proper manuscript. But complete it she did. And when she was done, Williams, a U.S. history teacher at Providence Day School, had collected no fewer than five publishing houses vying for her 382 pages of black girl angst.

Genesis tells the story of a 13-year-old Detroit girl who must overcome a verbally abusive family, an alcoholic father and a poor self-image – brought on in large part because of her dark complexion — to finally learn to love herself. (The book is recommended for ages 9-13, but, Williams says, adult readers appear to be harvesting life lessons within it as well.)

Purely fictional but oddly autobiographical, the book, Williams says, mirrors her own lifelong struggles with self-awareness — questions about her own beauty, her own height, her own hair…her own talent as a writer.

As much as anything, she says, Genesis is a story of “colorism,” here defined by the Urban Dictionary: “The discrimination of African Americans by Skin tone in their own community, usually subconsciously done, as most Blacks don’t realize they’re doing it until some dumb rapper or famous person makes a stupid untrue statement about darker toned women.”

Williams first penned a shorter version of this tale while earning a Master’s degree in creative writing for children and young adults at Hamlin University in St. Paul, Minnesota. She left the school with about 80 pages completed – a graduate thesis – and labored for years to turn that draft into a full-fledged novel. Along life’s way, she worked as a flight attendant, a Bank of America employee and a teaching artist before landing at Providence Day, a private academy in southeast Charlotte, where she instructs middle schoolers.

I met with Williams in the Providence Day School library to talk about the book and her breakthrough success. Somewhere in the conversation, our discussion shifted to colorism and its effect on black and brown people. Where did Genesis originate? Where was it born?

It comes from me. It was just a story about a little girl who was actually chunky at the time — because I was struggling with that — a little girl who dealt with bullies and has some issues at home. But with the revisions and the questioning through my (college) advisors trying to get to the heart of the story…this whole story of colorism emerged. She was dark. She had natural hair issues. So I stripped things away and got to the essence of what I’ve seen, what I felt, in my family, with my mom being a light-skinned mom and my dad being dark skinned and how we are told in ways, whether consciously or unconsciously, you’re not beautiful, you look like your dad, you got a big nose like your dad. Oh, thick lips. All of these played out in school. When I was in elementary school, I idolized these three little girls — two Danas, and I forget the other girl. They had this looong gorgeous hair, which we called “good hair,” and they were light-skinned, and I tried my best to be their friend. …I just remember writing these stories from my own childhood and when I was trying to make friends.

So, is this book autobiographical?

It might have started that way, but I realized that I had to divorce myself from the story; it couldn’t be a memoir. It had to include so many other elements. I think when I started writing the story and putting in my experiences from childhood, I was trying to control it so much. So I had to step back and be true to what this little girl is dealing with in this time period. Otherwise, if I kept it myself, it would have been a 1970s book, and it wouldn’t be as interesting.

Yes, unfortunately. Let me give you several different instances. Genesis came out Tuesday. That Thursday, when “Black-ish” aired, they dealt with the issue of colorism. And I thought, “Oh my gosh, this is what Genesis is about.” But let me back it up. I worked in kindergarten, and in kindergarten, this is how it plays out: Our kids — African-American, Indian, it doesn’t matter — if they’re brown-skinned, we have multicultural Crayons. They will not choose the crayon that matches (their skin color). You see our Caucasian children go in and they do it. Ours will not do it. I thought Wesley Snipes did away with all of that dark-skin hang-up.

Back when we grew up, women, we liked light-skinned men — oh, the Al B. Sures — we loved it. But Wesley Snipes changed that for the way we looked at men. Then our men became sexy — the darker the berry…you know, the whole thing. But it wasn’t the same for dark-skinned women. So even now, and even as I was writing it, I was still experiencing it. We have on the Internet — Twitter, Instagram — team light skin versus team darker skin. There’s a whole hashtag. I thought it was played out, too.

Where does that come from? What’s that about?

It’s just so generational. It’s our whole historical background. We know, but we’ve never really dealt with it — the house slave and the field slave. We knew the whole “marrying up” and how deeply ingrained it is, to marry up to lighten the race. We knew that you have an easier way if we marry up. But why does it still exist is the question. You know why; we have it because we don’t like to deal with it. I was told not to write the story. The only African-American instructor I had (in college) was like, “don’t write the story,” and I couldn’t figure out why.

How did this story survive from graduate school to now?

That’s all I had. (laughs) That’s the only one that I consistently worked on when I was there. I tried some picture books. At that time I was working on a Shirley Chisholm picture book… I wanted to do poetry, but I didn’t really get out. I wanted to try different things. Nothing really survived… I had to prove to myself that I could at least push to an end. What other themes are in the book?

I had an adult — a white, male teacher — say he’s getting this theme of parenthood and how we parents let our children down and how our children compensate and carry this… you know, trying to fix our problems. So it’s so weird. It is about colorism. It’s a book about not feeling good enough. It’s a book about dealing with shame and how do we make up for that shame and blame that we have for our parents. It’s so weird that our readers are getting something different.

Do you think Genesis will have crossover appeal?

Most of the people that are tweeting — educators and readers — they’re not African-American.

So what does that tell you?

It tells me two things. They’re getting more than colorism…the story resonates. It’s a universal story, and they’re finding that connection there. My fear is that we still don’t want to talk about colorism, that this book will not be seen by the kid that I really need to see it — the little girls in my class who, you know, still don’t want to color their skin or cry because their hair is too natural or too big and too wild. That was who I was writing it for, to validate, like, You’re good enough. …People are going to tell you you’re not tall enough, you not pretty enough, you’re not good enough. You can define who you are. It’s going to take time; it’s going to take courage. My fear is that they won’t get it.

Want do you want readers to take away from this book?

Does it have to be just one thing? What did you learn about yourself during this journey?

That I’m still struggling. I hate to say it. I still struggle with this idea of beauty and also needing validation. You know, it goes back to me wanting to tell everyone that I was a writer without doing it, because I was seeking some kind of, “I’m proud of you!” I struggled with that all while writing this story. Is it going to be good enough? Am I good enough?

You must be shocked at the reviews and the attention you’ve gotten.

I’m very shocked. I could not have predicted this. I could not. The whole New York Times thing. There were a few influencers on Twitter — Kobe Sharpe and John Shu. I’m so glad that reviewers don’t tag you. But still, if it’s something positive, people will share it. …What I’m more shocked at is that I have adults reading this. Even here, (at Providence Day School), I assumed that maybe a few kids would get it, and they’d buy it to support me. I could not predict them reading it… I’m getting adult men and women — “I’m reading your book.

What advice would you give to an aspiring writer?

Don’t just talk about it. Actually do it.

Glenn H. Burkins is publisher of Qcitymetro, a news and information company he founded in 2008 to provide content relevant to Charlotte’s African American community. He has been a reporter and editor at newspapers including the Los Angeles Times, St. Petersburg (Fla.) Times, Philadelphia Inquirer, The Wall Street Journal and The Charlotte Observer. Email: publisher@qcitymetro.com