For students at Bennett College, closure is unimaginable

As the 145-year-old Greensboro institution faces the possible loss of accreditation due to financial instability, students say they're looking ahead and remain optimistic. 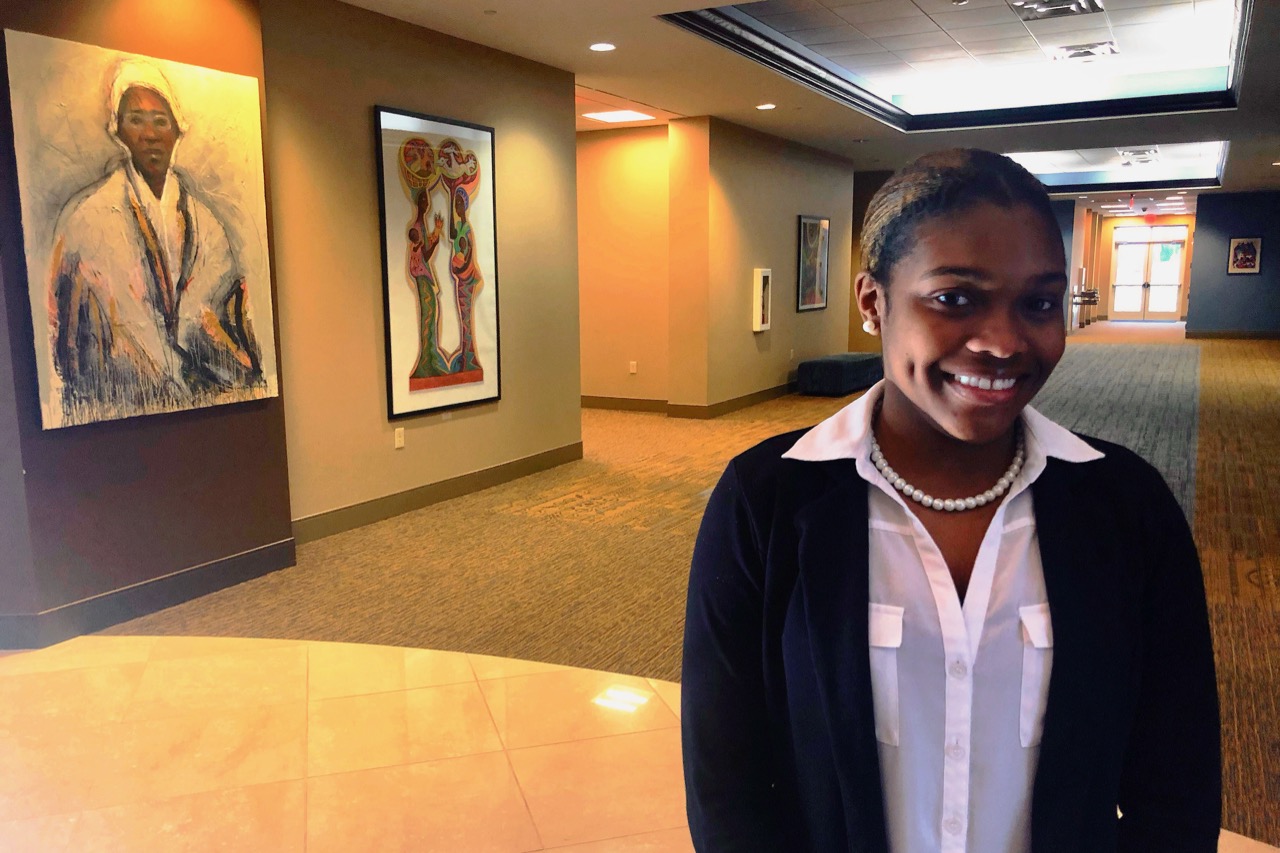 Carmesha Blackmon, a Greensboro native who is studying journalism and media studies at Bennett College, says she tries to stay focused on the schools immediate future, not the financial woes that threaten to shut it down. (Photo: Jordan Stutts)

Why this story matters: Bennett College in Greensboro is one of two historically black colleges for women left in the United States. (Spelman College in Atlanta is the other.) Unless Bennett can raise $5 million by February 1, it may lose its accreditation and be forced to close after 145 years.

Alexis Owens refuses to believe that her current semester at Bennett College could be the last in her school’s 145-year history.

Owens, an elementary education major, is on pace to graduate in December, but her school – one of two historically black colleges for women – may soon lose its accreditation after years of financial instability.

Without accreditation, Bennett could not offer federally guaranteed loans to the roughly 471 students currently enrolled there. And without those loans, the school, founded in 1873 to educate freedmen, could not survive.

A self-described “little ray of sunshine,” Owens said she refuses to let fear and doubt creep in.

“A lot of girls at Bennett don’t have family support and have come from broken homes,” she told Qcitymetro. “For them, losing Bennett (would be) like breaking up another home. We’re doing the best we can, and as long as I’m putting my best foot out there, that’s all I can really do.”

Owens’ optimism was echoed by other Bennett students and alumnae. And while none minimized the seriousness of Bennett’s plight, all expressed hope that, somehow, a financial solution would be found.

Meanwhile, Bennett’s hope for survival may rest on its ability to raise $5 million by the middle of February.

‘No shortcuts in life’

Founded as a co-educational college to train black teachers, Bennett College is a maze of red-brick buildings and walkways that cut through 60 acres east of downtown Greensboro. In 1926 it transitioned to become a four-year college for women.

Students who walk the campus today stress the importance of sisterhood, and they refer to one another as “belles,” a nickname derived from a large brass bell positioned beside the school’s Annie Merner Pfeiffer Chapel, with its soaring steeple and clock tower.

Inside classrooms, faculty and administrators stress that “there are no shortcuts in life.” It serves as a reminder that hard work pays off while also reinforcing a campus-wide practice that students should keep to walkways to avoid trampling the neatly trimmed lawn.

On Dec. 11, just before Bennett let out for Christmas break, the Southern Association of Colleges and Schools Commission on Colleges (SACSCOC), an accrediting organization, informed Bennett’s administrators that it had voted to revoke the school’s membership, citing the school’s ongoing financial woes. Students learned of the decision when Bennett’s president, Dr. Phyllis Dawkins, gathered the student body into the chapel to deliver the bad news.

Owens described that day as the “gloomiest” in her three years as a student there.

Dawkins quickly announced that she would appeal SACSCOC’s decision, with a hearing scheduled for mid-February.

Bennett’s financial outlook had been bleak for nearly a decade, a microcosm of bigger issues facing HBCUs. As major universities recruit black students more aggressively, enrollment at historically black colleges and universities — a key predictor of revenue — has declined. The total number of HBCU students decreased 11 percent between 2010 and 2016, according to the National Center for Education Statistics.

The financial squeeze has been most acute at schools like Bennett — small, private institutions that get no state support. At Bennett, annual charges total about $29,000, and about 99 percent of its students need some form of financial aid.

Meanwhile, Bennett lost nearly half of its enrollment in the years following the economic recession that began in 2007. That decline was due largely to the federal government tightening its lending qualifications for the Parent PLUS loan program, a move that hit HBCUs especially hard, school administrators have said.

Dawkins, the school’s president, said Bennett once again is showing signs of growth. Enrollment ticked up 15 percent in 2018, and the school reported a $461,000 surplus for the most recent fiscal year.

Despite those positive trends, SACSCOC has set a $5.7 million fundraising goal that Bennett must reach by Feb. 1, when the school submits a report to support its appeal hearing on Feb. 18. As of last week, Bennett had raised $1.3 million, according to a school spokeswoman.

To assist in the effort, Bennett students have taken to social media to promote the hashtag #StandWithBennett. They also have reached out to hip-hop celebrities including Meek Mills and T.I. seeking financial support.

The Bennett spokeswoman said several celebrities have gotten on board, including Jussie Smollett, known for his role on the television series “Empire,” and his brother Jake, an actor and chef. John Amos, famous for his roles on 1970s television hit “Good Times,” and actor Brent Jennings also have supported Bennett’s cause.

Students also are asking alumnae and community members for donations.

An ‘oasis’ that empowers black women

“We’re asking our students to stay with us,” she said. “Many (parents) said they’re sending their daughters back to Bennett, that they stand with Bennett.”

Jayla Barnes, a junior studying special education, said she was initially “scared” when she learned that Bennett might lose its accreditation.

“I was homeschooled, and this was my first time actually being at a school,” said Barnes, who grew up in the town of Wilson, 168 miles northeast of Charlotte. “Knowing that the first place I’ve gone to is about to close down and I have to go somewhere else…I was just really scared.”

Barnes said Bennett is more than just a school. She described it as an “oasis” where black women go to “be empowered.”

“In a lot of places,” she said, “black women are put last, but going to Bennett, it’s a place where I know that I come first.”

Alumnae from the Civil Rights Era tell of Bennett being one of the first schools to invite Dr. Martin Luther King Jr. to speak on their campus in 1958.

Bennett belles also supported the Greensboro sit-ins in 1960, which were started by four male students from nearby North Carolina A&T State University. And most recently, during last year’s mid-term elections, Bennett students marched en masse to the polls.

Gwendolyn Mackel Rice, a 1961 alumnae, recalled being on Bennett’s campus to hear King deliver one of his early calls to “let freedom ring.”

“If Bennett were to leave, who would serve the community?” she said.

Carmesha Blackmon, who grew up in Greensboro and is studying journalism and media studies at Bennett, said she refuses to consider the prospect that Bennett might close. As she walked across campus one day in December, she said her mind was focused on the future — an acting class and internship program that begins this semester — not on Bennett’s financial woes.

“We’re still moving along,” she said. “We have things to get done. …We don’t really have time to be worrisome.”

Owens, with less than a year to go before graduation, said she would stay at Bennett with or without accreditation, assuming the school remained open. Her concern is that transferring now would push her graduation back an entire year.

Barnes, meanwhile, said Bennett is the only school she’s ever known. Still, for “comfort reasons,” she said, she also must consider other options.

“I’m going to be at Bennett until they shut the doors,” she said. “They’re going to have to force me to leave. I’m not leaving.”

How you can donate to Bennett College