Works by the Charlotte artist, poet and activist span 50-plus years, including a stint in prison. "Nothing could stop me from being able to express myself." 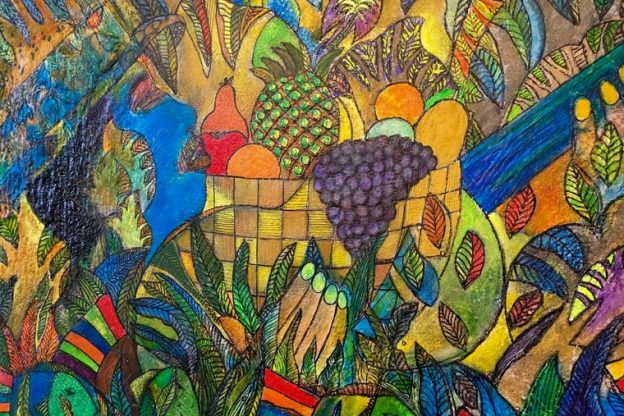 Discovery is at the heart of T.J. Reddy’s drive to create, to find the ties that bind us to nature and each other.

For more than five decades, the 71-year-old artist, poet and activist has “done the work,” he said, and neither incarceration nor, most recently, a cancer diagnosis could derail his “creative resolve.”

Reddy was convicted in 1972 in a civil rights case known as “The Charlotte Three” and was released from prison in 1979 after his sentence was commuted.

While imprisoned and not allowed to have paints, he used ashes from cigarette butts and spent matches to create smudge paintings. He processed colors from the pigment of small flowers and dandelions around the prison yard.

When they took away his guitar, Reddy said, “I would whistle like a harmonica,” referencing a line from his book, Poems in One-Part Harmony.

“I knew that my mind was what was free and nothing could contain that — no walls, no guns, no bars. Nothing could stop me from being able to express myself.”

On July 20, Reddy will speak about his journey at an opening reception at the Projective Eye Gallery at UNC-Charlotte Center City, where a retrospective of his work titled “Everything is Everything” is on exhibit.

And it is the work that is important to Reddy. “No matter how much anyone may dislike my work or myself, they cannot dispute that the work is there. It is done,” he said.

The Nature of “Everything”

Growing up in Savannah, Ga., in the 1950s, Reddy’s inquisitiveness was stoked by hearing his elders talk about human nature — “that’s their nature,” he would hear, and wondered “what do they mean by that?”

“Creativity for me is the art of discovery — which was prominent and positive in my life as a child,” Reddy said.

“As I began exploring, it became obvious to me that human beings are part and parcel of a much larger dimension of life,” Reddy said. “We cannot exist without nature being a precedent for the ecology of our being.”

He studied the elements of the periodic table, the nucleus of a cell. Dug into root sources, exploring trees in Africa, which led him to look more closely at leaves, and the leaves led him to look at fish. A narrative for his work began to take shape.

Reddy’s art, including his poetry, is rooted in three concepts: nature, education and human ecology. It is a narrative he started exploring, experiencing and experimenting with in the late 1960s, first with found-objects art.

Then in the 1970s, he started “looking at stuff more cosmically,” Reddy said. “The ‘everything is everything’ relationship began to have a meaning for me to use as narrative in my work — something I could speak to that was unique and definitive and would allow me a unique perspective for expressing what I thought, what I felt, what I saw, what I knew in my work as a visual artist.”

But I’m not just an artist, Reddy said. “I am a being whose connection is associated with my ancestry — an African origin. My blackness, my African-ness, my color is infused in every pore of my being. The source of the art comes from me.”

“Nothing has ever held (Reddy’s) creative energy back,” said curator Crista Cammaroto, the transitioning Director of Galleries at UNC-Charlotte.

Cammaroto has known the artist for about 15 years and said he is always positive, progressive and forward-moving. She calls Reddy a “social surrealist,” saying his work is almost like magic realism.

Reddy feels very deeply about how we treat each other, she said, and that’s reflected in his paintings, which “always have a tribe of people present somehow.”

“There are so many layers of paintings and we wanted to do big significant bodies that worked together in a narrative, a little bit of his life and the different philosophies” he’s expounded in his work for 50-plus years, Cammaroto said.

Reddy’s poems, portraits of family members and a special collection of documents from “The Charlotte Three” history also will be on display.

In a wide-ranging interview with Qcitymetro, Reddy talked about creating while incarcerated, his appreciation for teachers, his concerns for future generations and black-on-black crime. Here are his comments edited for brevity.

Sustaining creativity while in prison

Just because you’re incarcerated or in a place where you have walls and bars and guards, how is that any different from being outside of prison walls? We’re prisoners, we’re slaves, we’re detained, we’re incarcerated. If we stop to really, really think about it, what’s the difference between being inside or out? … Just because you put handcuffs on me you think my mind is bound or binded by an inability to think?

There is an uncanny capacity of human will to survive and sustain ourselves — always with creativity. … We can make music in the midst of being chained and treated with such abject horror and turn that into a life-giving property creatively.

What still inspires the work?

One word — children. … What have we left for future generations to reference what it is to be a person concerned about the well-being of others, the environment? What are we leaving as a positive example or reference to show young people how to grow into being responsible adults — to be communicative, committed listeners, to be fully present?

The ruin of a nation begins in the home. … What legacy are we leaving them to show that we really care about them?

Teachers are endearing to me. … They are a great source to know how to make our lives relevant. (They provide) knowledge about sustaining and nourishing ourselves, and being nurtured.
(One of Reddy’s body of works includes a series titled “Scenes for the Teacher”.)

We are turning into what it is that we do not like about what others are doing to us as people of African descent. … We have become them — the colonial mindset, the imperialism, the aggression, the enslavement of the mind, the genocidal psychology that’s rampant.

We become the oppressors — to ourselves and each other — and we do the bidding of others who do not want us to be alive in the first place.