Gospel singer Richard Smallwood talks about his battle with depression

He made a career telling others about the goodness and mercy of God, but behind the scene, gospel artist Richard Smallwood was hurting. 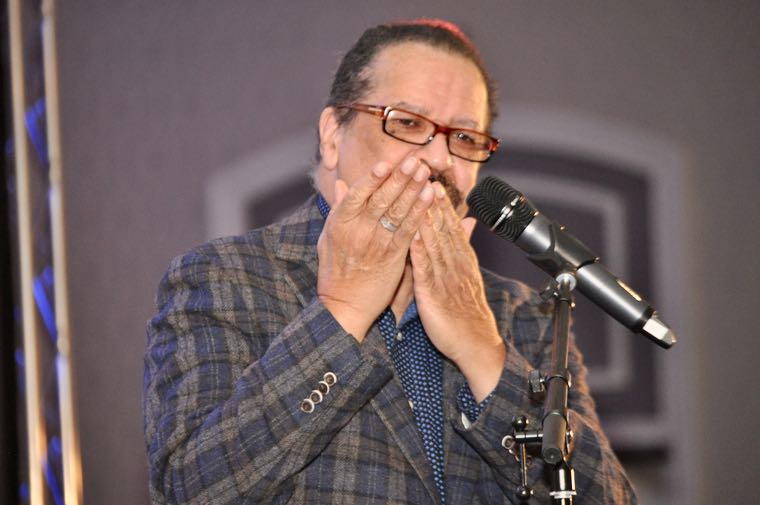 To his legends of fans, the name Richard Smallwood is synonymous with gospel praise. With eight Grammy nominations spanning two decades, his award-winning playlist ticks off like a Christian’s guide to godly contentment.

Far fewer know of his struggle with depression.

Smallwood, 67, shared his story at the Healthy Churches 2020 Conference in Charlotte.

Speaking to a rapt audience inside the Sheraton Charlotte Hotel, he recalled how, in his 20s and 30s, he was “very unhappy” and didn’t know why.

He recalled how, later in his life, depression left him emotionally paralyzed, unable to even go into a recording studio.

But he also recalled how, with the help of a trained counselor who was also a Christian, he began to find the help he needed.

Pernessa C. Seele, founder of The Balm in Gilead, which sponsors the annual conference, said she invited Smallwood to speak this year because the African American community — including the black church — is “suffering deadly, gravely, from mental health issues.”

She added: “I remember when I was a little girl growing up in Lincolnville, South Carolina, my momma would say, ‘You know, black folks, we don’t kill ourselves; that’s a white problem.’ Well, momma wouldn’t say that today.”

In fact, according to the Centers for Disease Control, blacks in the United States are slightly more likely to show depressive symptoms than their white or Hispanic counterparts.

Smallwood, who lives in the Washington, D.C., suburb of Bowie, Md., first shared his story with the Washington Post back in 2005. Since then, he has become a leading voice pushing to banish the stigma associated with mental health issues, especially as they relate to African American males and the black church.

Here is his story, as told at the Charlotte audience:

How it all began

Smallwood said he can’t pinpoint when his depression first set in. He is reasonably sure, however, that it started fairly early in his life.

Born the only child of a single mother, he described himself as growing up in a “pretty happy household,” though he said the man who later became his stepfather was “physically abusive.”

“Sometimes, depression is anger turned inward,” he said, adding: “When you’re a kid, you don’t have anything you can say. You can’t retaliate. You certainly can’t talk back if you live in a black household,” to which his audience shouted a resounding “amen.”

Smallwood said he dealt with his circumstances the best way he knew how – he’d retreat to his room and throw himself into his instruments and music, playing and singing “until the pain went away.”

“Way back then, nobody knew what depression was, certainly not in the black community,” he said. “You just sort of dealt with it.”

Smallwood said that years before his birth, his mother’s father, an avid hunter, committed suicide — “took a shotgun and killed himself.”

Smallwood now wonders whether his lifelong battle with depression is the result of a “double dose” – upbringing on top of genetics.

A question for God

“My mother always said I was an odd child,” Smallwood recalled.

Whether odd or not, few could deny his talent for music, even at an early age. It was the one thing that always came naturally.

At Howard University, where Smallwood majored in classical piano with a minor in voice, he found a music mentor in an older student named Donny Hathaway. The two became pals.

But roughly a decade later, Hathaway’s body was discovered on a sidewalk below the window of his 15th-floor room in a New York hotel. Investigators ruled his death a suicide.

Friends and business associates said Hathaway, in the months leading up to his death, had been acting irrationally, seeming to be paranoid and delusional, according to published reports.

In a 2008 episode of “Unsung: The Story of Donny Hathaway,” the famous singer was said to have been convinced that “white people” were out to kill him and had connected his brain to a machine to steal his music.

Now looking back, Smallwood wonders if there is some unknown link between creativity and mental illness.

“Creative people are different,” he said. “We sort of walk to the beat of a different drum.”

Smallwood said the question of a possible link is something he wants to ask God some day.

“What is that about?” he asked. “…It seems like the more creative sometimes, the worst the depression.”

Despite his tremendous talent, Smallwood said he frequently felt insecure about his abilities, and he often compared himself to other gospel artists, some who appeared to have far greater commercial success.

He thought that perhaps his sadness would abate once he achieved the career goals he had set for himself. But even with commercial success, he said, “the happiness did not come, the darkness did not go away. And I think I was in denial.”

After years of often being sad for no apparent reason, Smallwood was diagnosed with clinical depression in 2002. By then, he said, he had hit some low points – even contemplating ending his own life.

At one point, he said, while attempting to record some new music, he became so despondent that he could no longer go into the studio. He also suffered from “social anxiety,” he said, and was sometimes anxious about talking on the telephone.

And perhaps most distressing of all, he said, he sometimes felt like a phony, singing about the goodness of God while working so hard to hide his own human weakness.

“I didn’t really understand why I had it, and why God had given it to me,” he said. “I used to say, ‘How can I get up and sing about “Jesus, you’re the center of my joy” and “I love the Lord” or “there’s healing for your sorrow; there’s healing for you pain” and then I leave the stage and I’m hurting? I feel like I’m lying. I’m encouraging all these people, but I’m lying, because I’m messed up.”

And then there was what Smallwood called the cultural stigma often associated with depression in the black church.

“People are embarrassed or ashamed, as I was, to say anything about it for fear of what people may think of you,” he said. “A lot of times, people think that you are possessed and want to cast out those spirits.”

Even after his diagnosis, Smallwood said he was reluctant to take prescribed medications. He had heard horror stories about people on medication – “people walking around in a coma, coked up or like a zombie, that type of thing.”

But with the help of a Christian psychiatrist, Smallwood said he began to get the help that he needed, including medication.

Smallwood said he has now been off medication since 2010, an achievement he attributes to professional therapy.

His advice to others who may be suffering from depression: Get help.

“Reach out to somebody,” he said. “Don’t be afraid. Find someone you can talk to. Find friends — not everybody, but maybe one or two, maybe just one — that you can reach out to. The worst thing you can do is shut down and not let anybody in. That’s really easy to do when you’re going through the throes of depression.”

All in God’s plan

Despite the years of pain, Smallwood said he has at last found a redemptive message in his struggles. And since going public with his diagnosis, he said, he is sometimes approached by strangers — on the streets of D.C. and even at traffic lights — people who simply want to thank him for giving voice to an illness too often cloaked in shame.

“So God has sort of made it a little more obvious and clear to me why it was I was dealing with this,” he said. “Because ministry sometimes extends beyond what we think our ministries are. Sometimes God stretches us to take us to other places so that we can help other people.”

“It’s not been an easy road, but certainly, I am grateful for it, because, as the old hymn says, ‘If I can help somebody as I pass along, then my living shall not be in vain.’ So as we grow and mature, than God reveals to us more what our purposes are. We are all here for a purpose. You are all preordained to do certain things. And it may not come when you are in your 20s and 30s. It may come later. But God will open the doors and create the pathways so that you can walk in your purpose.”