What's it like to be a young black male in Charlotte? A panel of black scholars shared their experiences with an audience of about 200. 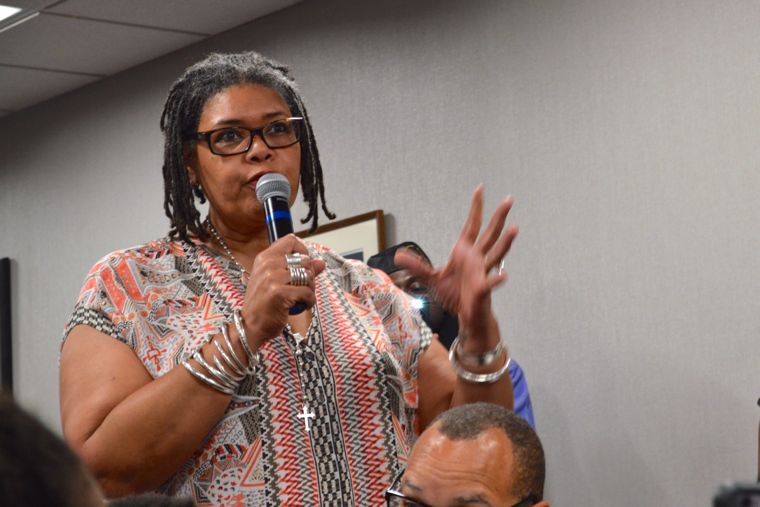 It was a high school honors English class and, as part of the criteria for enrollment, each student was supposed to read at least three books. But when the teacher got to Wright, she didn’t ask about his summer reading.

Confused, he asked her why. The teacher said she didn’t ask because she assumed that Wright had been “too busy playing football and other sports” and didn’t have time to get to the assigned reading list.

Wright, a young black male, believes the teacher saw only skin color that day, even though he had worked just as hard as his white counterparts to earn his spot in the class.

“It was interesting to me that she already had a bias about me before she even knew my name,” he said at a recent community event organized by the YBM Leadership Alliance, a college preparation and leadership development program for young black men. “She assumed that I wasn’t reading over the summer or taking advantage of the free time I had to make myself better.”

Statistics show that racial bias contributes to black men earning less than white men. They also are more likely to be arrested and face tougher sentencing when convicted. And when it comes to encounters with police, black males (boys and men alike) are more likely to be fatally shot, even when they are unarmed or pose no lethal threat.

The consequences of racial bias begins in early childhood for many black Americans. In Charlotte-Mecklenburg School, studies show that black students are far more likely than whites to get suspended or expelled, even when they commit similar infractions.

So if marching and creating hashtags won’t fix the problem, what’s the solution? That was Topic A at the recent gathering hosted by YBM Leadership Alliance, which met inside a crowded room in the Cone student building at UNC-Charlotte, where about 200 people gathered.

YBM Leadership CEO and founder John Martin said it’s unfortunate that too often when we discuss these issues, we don’t involve those most impacted – young black men. He wants to change that. So in addition to a panel of experts, he also assembled a panel of young black males to share how racism and bias have impacted their lives.

What’s it like to be a young black male?

The young men said they sometimes find it frustrating that, no matter how accomplished they are academically or otherwise, they are frequently the objects of ridicule and humiliating racial stereotypes. They feel they must always over-perform and go to greater lengths than their peers just to be considered equal, when in fact, many of them are far above average.

Davion Washington, Jr., a student at South Mecklenburg High School, recalled going to the mall with friends to celebrate his sixteenth birthday. While they were walking around like everyone else, he said, a stranger approached and cautioned them to walk quietly. The man said he had overheard security being told on their walkie-talkies to watch the small group of black males extra closely because they could be a problem. Gibson said the experience was humiliating.

Nineteen-year-old Harold Lowe Jr., said black males are constantly under pressure to live up to a higher standard than everyone else.

“When I was six years old, my mother started telling me everyday before I went to school that I had to watch out for the way that I acted,” he said. “She said there were already three strikes against me for being a black man in America. And at 19 years old, I’m tired of hearing the same speech every time I leave the house.”

The guys also said they are tired of being underestimated and treated differently, and tired of dealing with stereotypes and presumptions.

Twenty-year-old Roderick Carter, a rising junior at North Carolina A&T University, said that growing up he was always much taller than his peers. He said people seldom asked about what he was studying or about his interests. They just wanted to know if he played basketball.

“Why is there just an assumption that because I’m a black male and I’m tall that I play basketball?” he said. “Yes, we are great athletes, but we are also great scholars, great students, great speakers, great leaders, but those questions are never presented to us at first. We are always asked first if we play basketball or play football… I like books!”

Sixteen-year-old Cameron Reddig is a student at Independence High School, where he is a part of the Academy of International Studies program, which he describes as a segregated school within the school that’s mostly for white students.

“All the white kids are separated in one program,” he said, adding that he is often ridiculed by his peers and labeled as lazy or incapable. “There are only three African-American people in our class. Usually they [the white students] make racial jokes, like I’m going to laugh or something like it’s funny to me. “

In the end, the young men agreed that, while racial bias is real, they stay encouraged because they believe in change and hope for a better future.

The young panel said the best way for them to get back at the naysayers is to succeed.

“The more you tell me I can’t,” said one. “The more determined I become to prove you wrong.”

The second panel of the evening consisted of community leaders, educators, activists and law enforcement. Martin said it was important to bring everyone together to develop tangible action plans.

“None of us have the answer,” he said. “I’m not going to fake it and say that I have all the answers… but if we put all of our heads together we can come up with some solutions.”

Martin said the most important thing people can do is vote.

A woman in the audience went a step further, encouraging those inspired to create change to actually run for office.

Mecklenburg County District Judge Yolanda Trotman, who sat on the panel, said voters can inform themselves by visiting the Board of Elections website and researching each name on the ballot. She also emphasized the importance of parents being involved in their children’s education.

“Get involved in your [child’s] school,” she said. “For people who do not have children, go read to a kid. Go read to a classroom. Schools are looking for that all the time, and it helps. It starts to chip away at some of the issues we are seeing in our communities.”

Travis Jackson, community activist and founder of HBCU Pride Nation, said it’s time for the community to wake up.

Martin said the YBM Leadership Alliance understands the issue is too large to fully address in one night and plans to host events to follow up and continue the conversation. For more information, visit www.ybmleadership.com.