Five years after the Levine Center for the Arts was completed with the opening of the Mint Museum Uptown, the […] 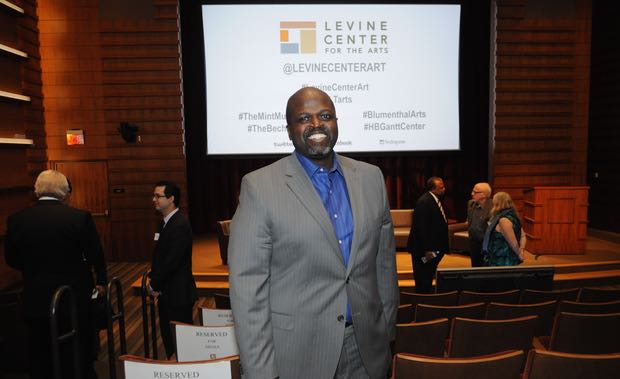 Greg Johnson, founder and managing director of the Charlotte-based marketing firm Orbital Socket, will lead a new campaign to promote the exhibitions, events, and resources available at Levine Center for the Arts. The center is made up of four independent institutions -- the Bechtler Museum of Modern Art, Blumenthal Performing Arts, Harvey B. Gantt Center for African-American Arts + Culture, and the Mint Uptown. (Photo: Glenn H. Burkins for Qcitymetro.com)

Five years after the Levine Center for the Arts was completed with the opening of the Mint Museum Uptown, the four institutions that make up the center have embarked on an ambitions new marketing campaign.

The institutions – the Bechtler Museum of Modern Art, Blumenthal Performing Arts, Harvey B. Gantt Center for African-American Arts + Culture, and the Mint – have co-sponsored efforts before, but nothing on this magnitude. In addition to the marketing campaign, which will be led by Charlotte-based firm Orbital Socket, the member institutions also will sponsor new initiatives to attract new visitors.

In some ways, the two-year campaign will move the Levine Center from being simply a collection of cultural destinations to having its own branded identity and life force, abbreviated LCA.

The campaign will be paid for using a grant from the THRIVE Fund, which was established in 2013 to provide financial stability for Charlotte’s cultural sector. The fund was launched by Hugh McColl, the former Bank of America chairman and CEO, and is administered by the Foundation For The Carolinas.

On Monday, LCA announced several joint efforts for 2016, including:

• Free Lunchtime Tours: On the third Thursday of each month, starting in January 2016, the Bechtler, Gantt and Mint will offer free docent-led lunchtime tours. Each month the three museums will offer a collaborative theme.

• Community Festival: On May 21, all four institutions will sponsor a fee, daylong event that includes tours, hands-on demonstrations and live performances.

In the Q&A below, I spoke with Greg Johnson, Orbital Socket founder and managing director, about the marketing campaign and what it means to his firm, which he started in 2014 after 20-plus years in marketing and public relation.

Q. What’s your mandate as you begin this marketing campaign?

Really to create excitement around the Levine Center for the Arts and to establish it as one of the leading cultural arts institutions in the country.

Q. What would that entail?

A lot of it is helping communicate the wonderful things that are already happening here to the Charlotte community and to those in the surrounding communities. LCA is a gem of a cultural center, in the Southeast certainly. We want to make sure everybody understands full what this is all about and what it entails.

Q. So the marketing effort will be local?

It will be local to start, definitely. We’re trying to engage the community with what’s happening here.

Q. Will that effort include outreach to minority communities?

I think it’s a total market effort, but given the demographic makeup of Charlotte and the surrounding area, I don’t think you can not include or have some emphasis on the diverse communities.

Q. What is Orbital Socket?

We’re a brand-engagement company, so we started the company to do this work around helping people understand the great companies and businesses in the market. We help build brand strategy and create new conversations in the market about institutions and companies all over the Charlotte region.