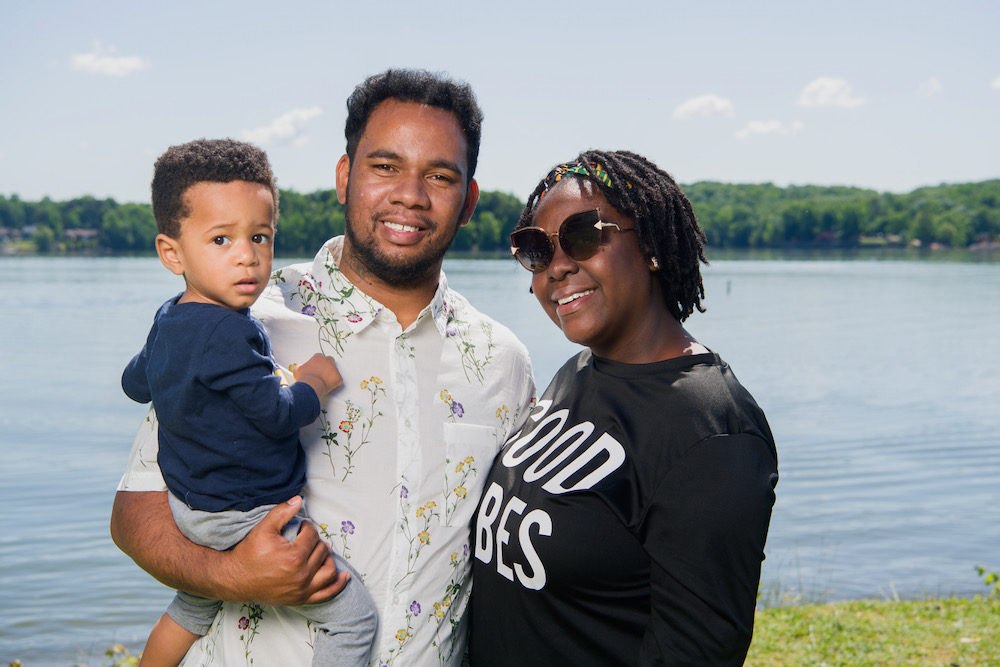 By Antonio Greene, as told to QCity Metro Staff

Life is short and it’s so unpredictable. You just never know when your last day here is going to be, so I try to live every day happy and full of joy. Even if it’s going bad, I try to find something positive in the day to make it go by.

I was working at a hotel in Charleston, South Carolina, when the pandemic started. I had had the same job for almost 15 years. I had made a lot of friends there. All of us got the news that we might be laid off or furloughed, but it was a big shock when I got furloughed from my position on March 21, 2020.

I didn’t know what to do. I sat around for maybe two or three weeks. Then I was like, Man, I guess I gotta make some money. I gotta get back out there and get back to working. So, I just started applying for jobs that were on the internet.

I came across a position with a company that makes deliveries for Amazon and decided to apply and see what would happen. I was hired within two days. It was my first time doing a delivery job, and I didn’t know what to expect. I did know it was going to be different and it was going to be busy.

I met a lot of people along my daily routes. With Covid going on, everyone was kind of secluded in their houses. They were usually happy when the delivery driver pulled up, so, whenever I could, I just tried to have a small chat with them. One day last July things were very different.

I was in Summerville, South Carolina, doing my usual route, when I noticed a stop sign on the window. It said that someone in this house was going through chemotherapy and their immune system was weak, so please try to maintain your distance.

It made me think about my own grandmother who died of cancer in 2016. My father passed away that same year and my mother two years later. I knew what it is like to have a family member who’s sick and unable to do much for themselves. Sometimes, something as simple as a hello, or how are you can make their day better.

I wanted to do something a little extra for this family, more than my basic delivery.

During my break, I grabbed a bouquet of flowers and a card. I wrote a note saying that I am praying that you get better. Hopefully, these flowers will bring you a little bit of joy. I left it on top of the package that I delivered previously and continued my route.

I had the same route the following week and ended up making a delivery to the house next door. I wanted to do a quick check on them and see if they were doing okay and if they received the flowers and the card. A woman opened the blinds and we talked through the glass. She said, Hey, my husband’s right here. He’s the one you left the card for.

He was very appreciative. He said it made them cheer up a little bit.

That made me feel good. It made my day.

I think they might have contacted the local news. I don’t know. My manager called me one day. He said, Hey, Antonio, did you do anything that was unusual?

He said, We got some stuff on the news. Did you make a special delivery to a house? Did you leave flowers?

We recently got the news that I received the John F. Kennedy Presidential Library and Museum Covid Courage Award for acts of kindness during the pandemic. I couldn’t believe it. This is all like a dream. There will be a virtual ceremony towards the end of May. Mitt Romney, winner of the Profiles in Courage Award, will be the guest speaker. As far as me, I just like to help people.

What happened to the customer? He’s doing good. The wife told me they went to dinner for the first time, maybe a couple of weeks ago. I was very, very glad to hear that he’s doing way better.

We kind of formed a special bond. We check on each other quite often, probably once a week. I recently got married and moved to Charlotte. I am a warehouse associate with Amazon. They always text me and say I’m doing justice to Charlotte. They actually bought me a wedding gift from my wedding registry. I was surprised and thankful for that.

After the awards ceremony 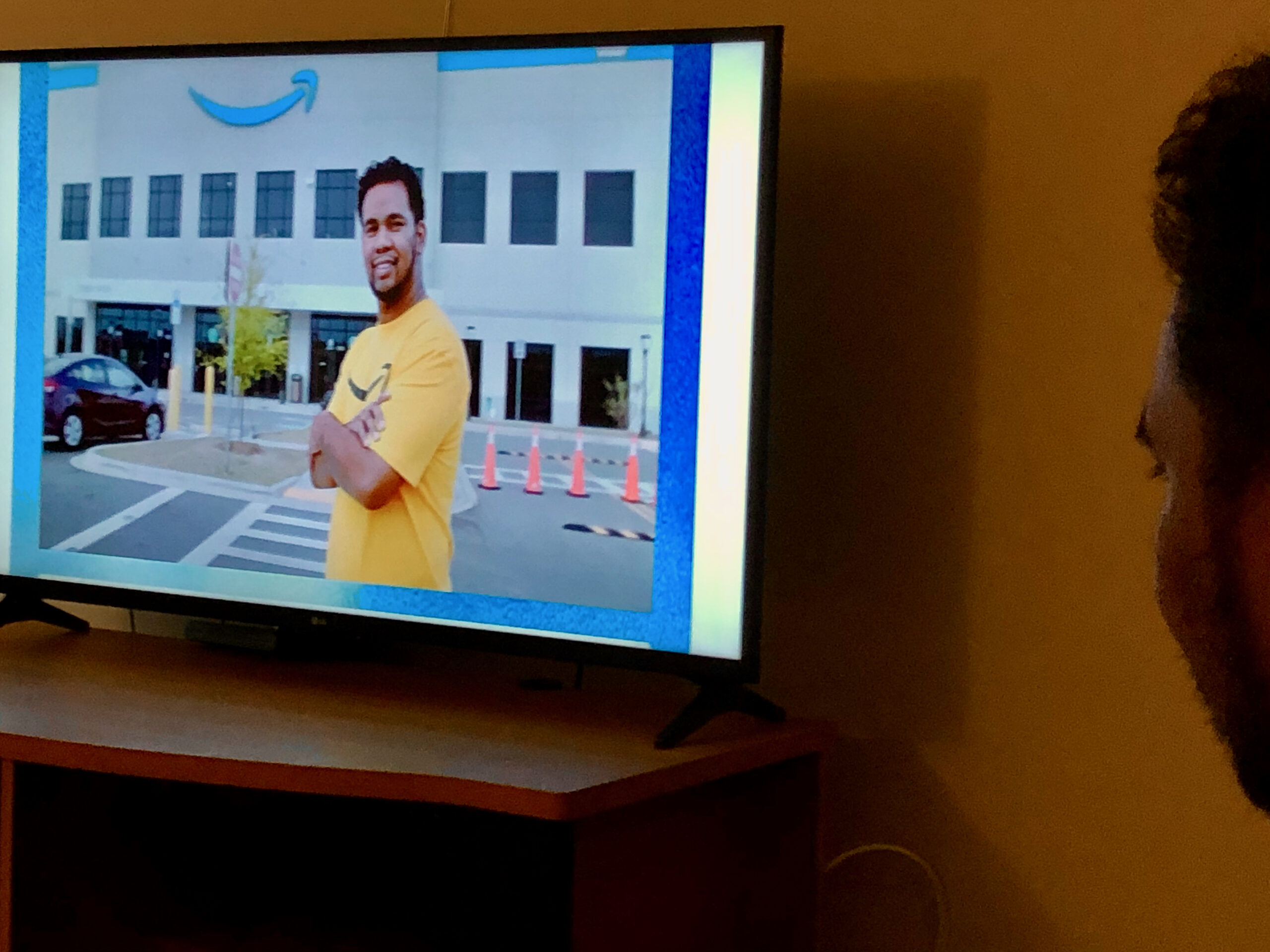 Editor’s Note: At 7 p.m. on a Sunday evening, Antonio sat with his wife and son to watch the awards ceremony, which was live streamed. Two days earlier, his award had arrived via express delivery. The ceremony was hosted by comedian and talk show host Jimmy Fallon. Sen. Mitt Romney of Utah received the Kennedy Library’s Profiles in Courage award for his work in Congress. Antonio was among seven others, including Michigan Gov. Gretchen Whitmer, who received a special Covid Courage Award.

I’m still sitting here in shock. To be mentioned in the same conversation with Mitt Romney and all the others.

It was a blessing. When I got that call from Caroline Kennedy saying I was one of seven people…I was like, Really?

John F. Kennedy’s daughter and grandson — to get them to call me, just a normal, working person.

If you do one positive thing and it spreads like that…the world would be a whole different place if everyone just practiced being kind a little bit more, having a little more patience. It can make a big difference in the world.

You never know how much of an impact you’re making on someone, just being nice, just asking someone, How was your day? How are you doing today? Is everything okay?

Kindness can take you a lot of places you could never imagine. That’s what my mom taught me.

I wonder what she would say right now, like, I’m proud of you, son.

Man, I wish I could hear those words come out of her mouth again.

It was a good day. I got up this morning and had my coffee and went to work. All day long I was anticipating watching it, waiting for it to come on. And just to see it, sitting with my family… I couldn’t ask for anything else.

To our readers: We’ve long known about Covid-19’s disproportionate impact on Black communities across America. At QCity Metro, our mission dictates that we document that reality. But even amidst a pandemic, we also find stories of hope, inspiration and perseverance. This series is dedicated to telling those stories.

Our “Portraits of Perseverance” series is funded by the Facebook Journalism Project and sponsored locally by OrthoCarolina. To share your Covid story, email editor@qcitymetro.com with the word “Portraits” in the subject line.