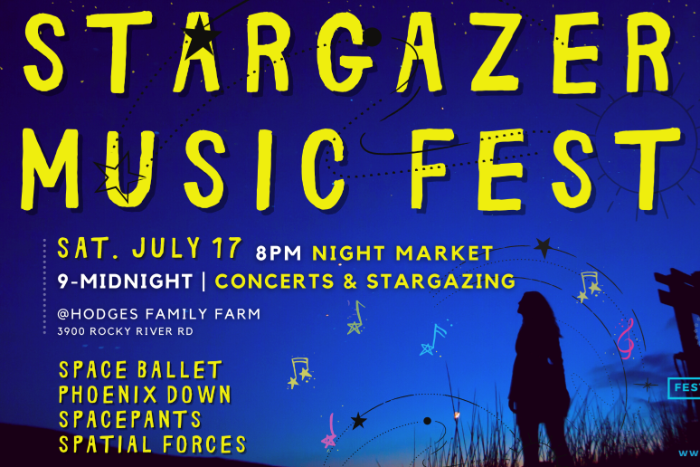 Crawl out of your caves to join fellow earthlings on a multi-dimensional cosmic journey: night-sky viewing with contemporary electroacoustic music to fit the vibe.

Vibe out in a serene field at night to stargaze at a chill music fest. Grab a beer from Pharr Mill Brewery's beer truck, get some snacks, fresh produce, and baked goods from the Night Market, take a look into one of the on-site telescopes, and pull up your blankets and chairs in the grass surrounding the performers for an unparalleled night-sky viewing + concert experience.

What to bring:
- Blanket and/or lawn chair
- If you want, download a stargazing app / sky map to use (Stellarium or Star Walk are good options!)
- Telescope or Binoculars (optional). Telescopes will also be provided to allow people to view the moon and other objects in the night sky, weather permitting, courtesy of Charlotte Amateur Astronomy Club.

* If it's too cloudy, we will still use this opportunity to connect with nature and music. It doesn't get much more relaxing than lying down in a peaceful field and looking up at a show of clouds gliding by at night, with a live concert as the soundtrack for the nightscape!

Kim Milan and Jedd Lygre joined forces two years ago to birth their Trip-Hop Operatic duo, Space Ballet. "We've both grown up, toured, and traveled all over planet earth and you can hear this in our sound, we love fusing analog and digital, dark and light, concrete and satin within the texture of sound we create"-Milan.

"Space Ballet sounds like the coolest band at the end of the universe (Kim Milan) can sound hopeful, mystical, and forlorn in the same breath" -Pat Moran, QC Nerve. www.facebook.com/SpaceBallet

While singing (Jen) and playing viola (Diana) at a music festival in Vermont, we met, realized we shared a life-long dream of wearing as many sparkles as possible, and ran joyfully out into a field to celebrate. Our enthusiasm attracted the attention of some rad aliens who invited us to party and jam with them. As luck would have it, they were having a full-on sparkle party. When we woke up the next day, groggy and disoriented, we discovered the rad aliens had left us three parting gifts: a 25-foot long tube, a mission, and several pairs of spacepants. The tube would of course become a central focus of our music-making. The mission, which we accepted, is to wear spacepants while bringing both our own and other earth-bound beings’ works of music, poetry, multi-media, storytelling and art to life. Look, we don’t know if we’re doing crystals right, but we sure try. www.spacepantsmusic.com

Together, Jessica Lindsey and Christy Banks form the Spatial Forces Duo, a bass/clarinet duo committed to performing music with electronics in non-traditional venues. We perform music where our acoustic sounds converge with digital sounds (recorded from the world around us, then manipulated and processed to create an electronic soundscape) to accompany us in performance. Aka “electroacoustic” music... we hope you name it "awesome."

Since 2013, we have performed internationally in China, New Zealand, Europe, and Canada and nationally from Alabama to Alaska. www.spatialforcesduo.com

A woodwind ensemble specializing in alternative classical music and geek chic. The group is comprised of Teil Buck (oboe), Dylan Lloyd (clarinet), and Jessica Harrie (clarinet). The group performs arrangements of works from well-known TV and anime series, movies, and video games and has a library of nearly 100 different arrangements. The group has recently performed as guests for GDEX, CinCity Con, and Ohayocon. www.phoenixdownrpg.com

Brought to you by Charlotte New Music: CNM promotes the creation, performance, access, education, and opportunities in contemporary music in Charlotte, NC, and beyond.