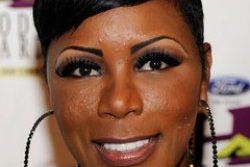 Ever since her debut in the early '90s, comedy queen Sommore has had audiences falling out of their seats with her witty skits on the female perspective. Dubbed "a force to be reckoned with in the new millennium" by Oprah Winfrey, Sommore delivers her often-controversial jokes in a lighthearted manner and is never afraid to push the boundaries with her animated shows. Oozing with sass and style, her skits are as funny as ever as she hosts the 2014 Standing Ovation Tour, where she'll perform alongside a number of highly acclaimed comedians.

Not only has Sommore had a widely successful career as a female comedian, but she's also appeared on numerous talk shows and acted in many films and television series, proving she's an entertainer at heart. Back on the road for a string of highly anticipated shows, Sommore will have fans rolling on the floor with her latest stand-up routine.
Tweet
Share
Share
0 Shares
Venue
Comedy Zone Charlotte
Address
900 NC Music Factory Blvd. Suite B3
Charlotte, NC 28206
Start Time
7:30 pm
Cost
$30 - $40
Event Category
Comedy
Visit Website
Tweet
Share
Share
0 Shares
X
no thanks