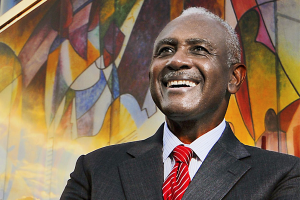 Harvey Gantt was the first African American student at Clemson University, where he graduated in 1965 with a degree in architecture. From 1965 to 1968, he interned at Odell in Charlotte, the first Black architect the firm had ever hired. He received his master's degree in city planning from Massachusetts Institute of Technology in 1970 and became founding partner of Gantt Huberman in Charlotte in 1971. The firm has developed numerous important buildings in Charlotte, including the Charlotte Transportation Center, TransAmerica Square, ImaginOn, Friendship Missionary Baptist Church, and the Johnson C. Smith University Science Center.

Gantt served on the Charlotte City Council and in 1983 was elected the city's first Black mayor. He received the AIA North Carolina Award of Excellence in Architecture in 1981 and the AIANC Gold Medal in 2017. In 2009 Charlotte's Afro-American Cultural Center was renamed the Harvey B. Gantt Center for African-American Arts + Culture in his honor.
Venue
virtual
Start Time
5:30 pm
Cost
Free
Event Category
Arts & Culture
Visit Website
X
no thanks