As the new CMS athletic director, Ericia Turner says she wants to emphasize academics as well as sports

Turner says her drive for education comes from past experiences, especially the death of her infant son. 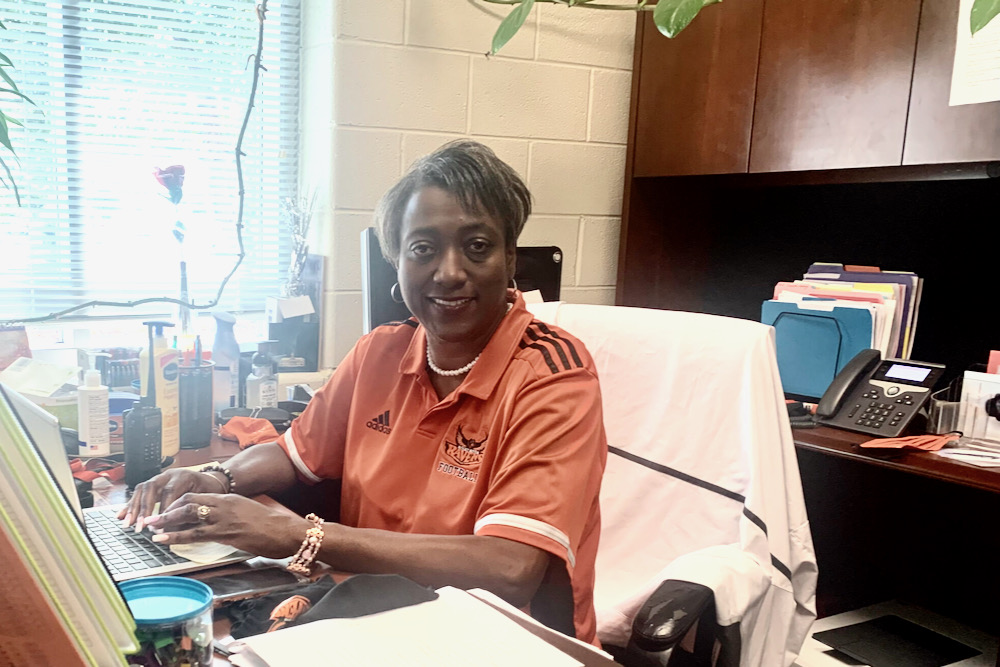 Ericia Turner, CMS' new athletic director. said she wants the district to set the standard for school across the country. Photo by Jalon Hill

When the job of Charlotte-Mecklenburg Schools athletic director became available this summer, Ericia Turner wasn’t sure she wanted it.

Since 2016, she had been principal at Rocky River High School, and she liked the work she was doing there. But remembering the death of her infant son in 2000, she also knew that the new position would allow her to have a bigger impact on education.

“When that happened, my life shifted,” the Sherrills Ford native said of losing her child, one of two twin boys. “I realized that it has to be about more. Athletics and coaching was my platform, but there is a bigger picture and bigger purpose.”

On August 24, Turner was named CMS athletic director — the first Black woman to hold the position — after the retirement of her predecessor, Sue Doran, in July.

Now as she prepares for her new role, Turner said she wants to do her part to make CMS known for rigorous academics, just as it’s known for athletic excellence.

“We want to be the model district on what athletics should be,” she said. “Competition is good, but we want to have some (academic) integrity.”

Being the best has long motivated Turner, dating back to her days at Bandys High School in Catawba, where as a 6-foot-tall freshman, a coach encouraged her to try out for the girls’ basketball team. She earned a spot playing center on the varsity team and won two consecutive state championships, in 1987 and 1988.

“I quickly developed because it was really a mindset,” Turner recalled. “I didn’t want to play competitively; I just liked to do it for fun, but once I had to be out there, I worked hard at it.”

After graduating in 1990, Turner went on to UNC Chapel Hill on a basketball scholarship. While there, she joined a Big Sisters program and began mentoring young girls — her first taste of what a career in education might offer.

“It made me feel like I was really doing something…being impactful in someone’s life,” she said.

In 1992, Turner transferred to North Carolina A&T University, where she continued to play basketball. She said the sport had stopped being fun at Chapel Hill.

Turner went on to earn bachelor’s and master’s degrees in physical education from NC A&T. Her first post-graduate teaching job was at Parkland High School in Winston Salem, where she also coached girls basketball.

Impressed by her coaching style, the football coach hired her as the wide receivers coach for the football team for a year.

While at Parkland, on May 2, 2000, her infant son died from Sudden Infant Death Syndrome. She had dropped him off that morning at daycare.

Turner said the loss of her son became a driver, pushing her to become a better educator.

“My son died in daycare, so he was in somebody else’s care,” she said. “In this field, we have other people’s children in our care, so that’s real to me.”

After deciding that she needed a fresh start, Turner moved closer to home to be with her family. In 2002, she took a job as a physical education teacher and girls basketball coach at Independence High School.

Turner left Independence in 2007 to work at the newly opened Mallard Creek High School, where she became the school’s first girls basketball coach. There she started her principal internship.

After earning a master’s degree in school administration at Gardner-Webb University in 2008, Turner left CMS for a job as assistant principal at Newton Conover High School in Newton, where she worked until 2012.

She then went on to work in Alamance and Iredell counties as an assistant principal and athletic director until she returned to CMS to become principal at Rocky River in 2016.

During her time at Rocky River, she said, she put a strong emphasis on “cultivating leaders,” from staff to students.

“I don’t have to be in front to lead everything,” she said. “I’ve learned to step back, trust the process, trust the people around me and help them grow as leaders.”

In her new role, Turner said, she wants CMS student-athletes to take academics just as seriously as they take athletics.

“Everybody is not going to the state championship, but we can create opportunities for our kids to go to the next level,” she said.

In 2015, Turner earned an education specialist degree from UNC Greensboro, where she is currently pursuing a doctorate in school administration.

“I want to be that role model for them,” she said. “I want to set what expectations should be.”