Viral singer-songwriter will appear on July 13 episode of the hit TV series. 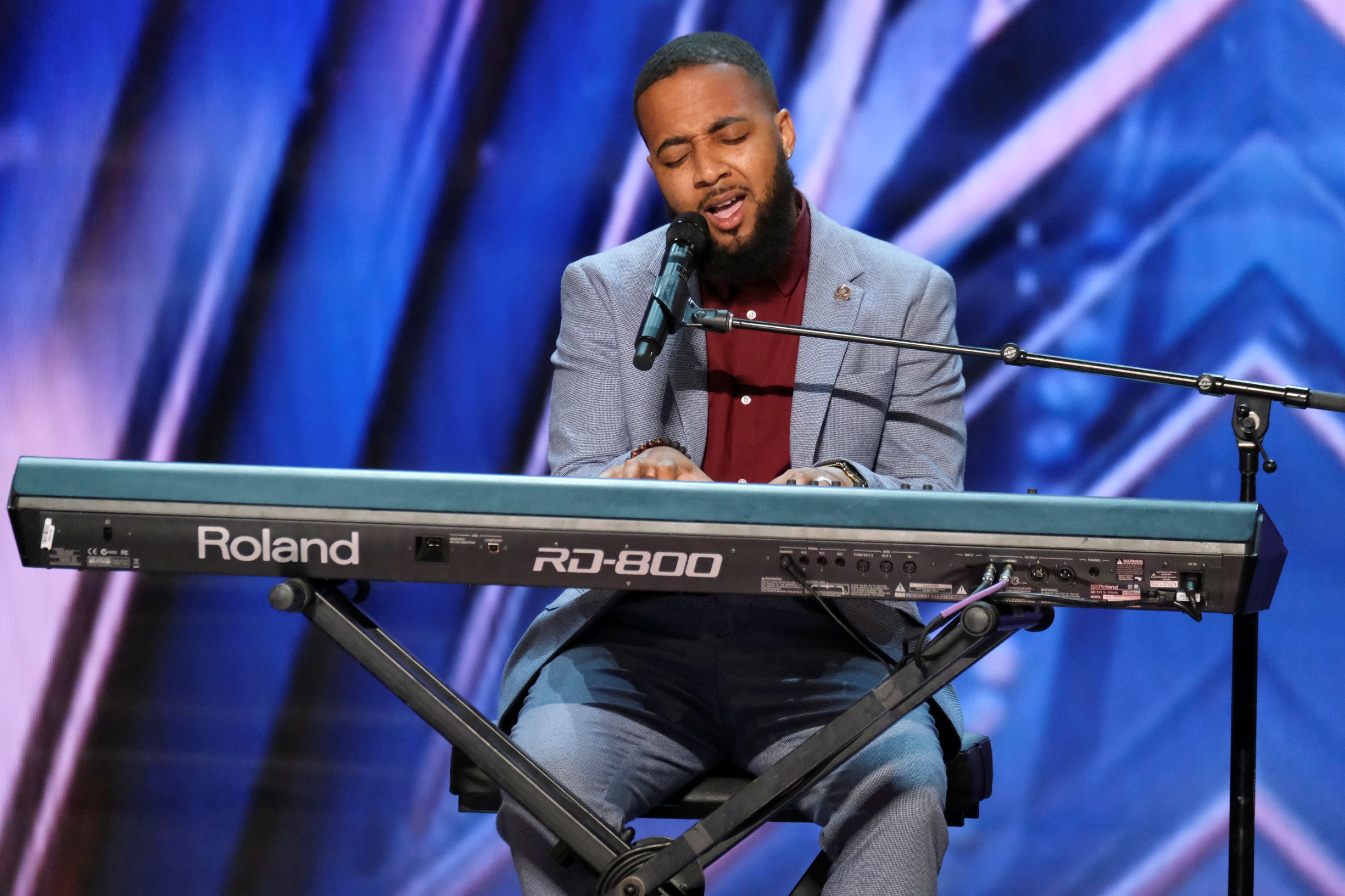 Ray Singleton, 32, during his audition on NBC's "America's Got Talent." Viewers can watch the episode on July 13, 2021, at 8 p.m. Photo courtesy of Fremantle

Charlotte singer-songwriter Ray Singleton has been handling newfound popularity pretty well since he and wife, Roslyn, went viral last year and landed on “Ellen.” Now, fans can cheer him on as he performs on NBC’s “America’s Got Talent.”

In a preview of the episode, which airs July 13 at 8 p.m., Ray plays the keyboard as he belts out a rendition of Andy Grammer’s 2019 track, “I Am Yours.” Roslyn is seen standing in the wings with host Terry Crews and tears welling up in her eyes.

The Singletons, who married in November 2018, have publicly documented their story as Roslyn battled brain cancer. She was first diagnosed in 2013 before they met.

In 2019, ahead of her second surgery to remove a tumor, Ray recorded a video serenading his wife to his rendition of Daniel Caesar’s “Get You.” It caught the attention of millions, including talk show host Ellen DeGeneres, which led to a February 2020 invitation to her daytime talk show.

Since then, Ray, a self-taught pianist, has booked shows almost every weekend with his band. We spoke with the couple in October after Ray sang the national anthem at a Carolina Panthers game.

Related: Catching up with The Singletons, the Charlotte couple that went viral

We’re predicting Ray will go far in the talent competition series, where he’ll compete for the $1 million prize. Recently, we reconnected with the Charleston, South Carolina, native before millions of viewers tune in for his AGT debut. He talked about the audition, Roslyn updates, celebrity fans and what else he’s working on.

Answers are lightly edited for brevity and clarity.

Q. How did you get to audition for “America’s Got Talent”?

Believe it or not, the opportunity was supposed to happen last year. Right around when the Ellen thing was happening in February, one of the producers reached out to me on social media. Things were rolling.

We were actually supposed to go back to “the Ellen Show” on April 1 of last year. My wife and I were on the way to celebrate at dinner — March 16, I’ll never forget the day. My producer called me and said, “We’re shutting down production because of Covid.” That was a dream crusher.

So it comes back around, the world is opening back up and people need those feel-good stories. And again, God is just continuing to provide opportunities.

Q. What was it like to experience such a big opportunity with Roslyn there? We saw a clip where she joins you on stage. Again, you have us teared up. Y’all like to make sure we have tissues nearby.

But, it was perfect. You have a dream, and then God places this person in your life and it just enhances everything. It made my dream of being on the biggest stage, and being able to look over to my left and see my wife there with me…it was incredible.

Q. How is Roslyn?

My wife is doing phenomenal. We just got back from the hospital. She was complaining of some pain and found out there’s some brain swelling. They had to put her on steroids and observe her. But, she’s back home now.

She’s healthy, and she’s beautiful and she’s smiling. I couldn’t have written it better.

Q. What can you tell us about the performance?

To be in front of the judges and live out a dream was incredible.

Q. Many performers have been sidelined throughout the pandemic and had to get creative to continue following their passion. What do you say to them as we return to gathering?

Don’t stop. Do what lights up your life because I am a living testimony of not stopping. Facebook memories have done a good job of bringing back where you were. [laughs] I’m looking at videos of me in my bedroom toying around with my keyboard from 11 years ago. Like, “Yo, I’ve really been doing this for a long time.”

This is an incredible moment, and it’s all because I didn’t stop. It turned out to get me a beautiful wife, and my gift is medicinal to her. We were able to inspire people around the world that we’d never met. We’ve gained friendships and been in places we never thought we would be. And it’s just the beginning.

Q. Who are some of the people that have reached out to you where you’ve said, “I can’t believe they know who I am!”

Are you kidding me? [laughs] John Legend has liked about five of my videos. THEE John Legend!

[Actress] Yvette Nicole Brown is a very close friend of ours. [Comedian] Affion Crockett has commented on our stuff and [“America’s Got Talent” host] Terry Crews. To meet him has been unbelievable.

The support from regular people like us… we’ll be in the mall and people stop us. They say, “Your story inspires us.” They wait to take pictures with my wife. It’s crazy. People truly think we’re celebrities. We’re real people. We gotta pay Duke Energy just like everybody else. [laughs]

Q. What else are you working on?

I actually have a website now, so I’m feeling a little bit like a celebrity. It has my upcoming events. I’m performing at Novant Health’s Welcome Back Fest on July 24 at Romare Bearden Park with the likes of Anthony Hamilton. I go on at 12:30 p.m.; I get the early crowd. But, I’m going to rock it like I’m going on primetime!

Watch a preview below of Ray’s “America’s Got Talent” audition.