Kenny Stevenson remembers his son, Dairyon Stevenson, one year after he was killed in a mass shooting on Beatties Ford Road. 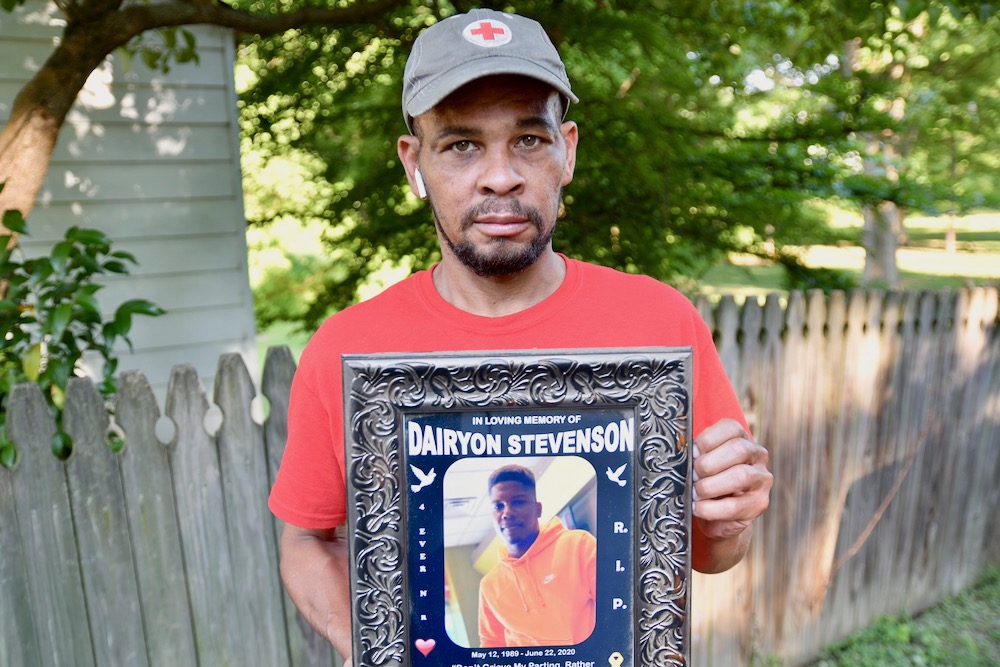 This Father’s Day will be particularly tough for Kenny Stevenson.

A year has passed since his only child, 31-year-old Dairyon Stevenson, died in a mass shooting on Beatties Ford Road, one of four people to perish that day.

The outdoor gathering had begun on a Friday, a Juneteenth celebration, but long after the official commemoration had ended, spontaneous crowds lingered through the weekend. They gathered that Saturday and again on Sunday — Fathers Day.

Then in the early morning hours of Monday, June 22, the gunmen drove up.

With semi-automatic weapons they sprayed the crowd with bullets, about 180 shot in all, according to the police, sending the roughly 400 partygoers gathered scrambling for their lives.

Several others were injured, some as they fled into traffic to escape the fusillade.

The police have made no arrest in the case. But at a press conference on Wednesday, Charlotte-Mecklenburg Police detective Lt. Bryan Crum said investigators have “begun to develop a better idea about what happened that evening.”

“There were hundreds of people present that night,” he said, “but we have yet to get that one piece of missing information we really need to make those arrests and progress this case.”

“It was a nightmare”

On a quiet street in the west Charlotte neighborhood of Oakview Terrace, Kenny Stevenson stand surrounded by family — his sister Rosalind, his niece Jessica and a great-neice.

He takes a breath and briefly closes his eyes before recalling the banging on the door that woke him from a sleep with word that his son had been shot.

“That right there is a memory that will never go away from me,” he recalled. “I don’t wish that on nobody.”

Arriving at the hospital, Stevenson made his way through a crowd of shaken-up people who had rushed there from the block party. He was greeted by hospital personnel who took him to his son, who was connected to life support.

“It was just a matter of waiting the day out. It was a nightmare,” Stevenson said. “They pronounced him deceased at 4:46 p.m.”

The family donated some of his organs.

A woman in Virginia and a man in New York got Dairyon Stevenson’s kidneys, and two people from Charlotte received his corneas, the clear, protective layer of the eye.

The day of the shooting, the Charlotte-Mecklenburg Police Department held a press conference, making a plea to the community to come forward with information.

The next major public update came on November 13, when CMPD released a one-minute video that showed two men standing beside a SUV and shooting into the block party crowd.

Stevenson said that since November he has gotten no update on the investigation from CMPD.

The department responded to QCity Metro’s inquiry with the following statement:

“While we typically can’t provide detailed updates on each investigation, we do try to contact our families in a manner consistent with their expectations. We always try to meet families’ expectations for contact, and those expectations are as unique as each of our victims. We have reached out to Mr. Stevenson today to ensure we meet his expectations in the future.”

Though disheartened, Stevenson says he knows that the police can’t solve the crime without help from the community.

He’s bewildered that a cash reward for credible information — upwards of $20,000 — has not compelled a soul to come forward.

“It’s going to take the community,” he said. “They know who did this.”

Even now, a year later, Stevenson said he still goes through a range of emotions and questions stemming from the tragic event.

With a slight tremble of the lips, he wonders where the police were during the unauthorized block party, but he knows he can’t dwell on that.

Then he ponders what would possess someone to maliciously fire 180 rounds into a crowd of unsuspecting people.

But perhaps the question that haunts the Stevenson family the most is what was Dairyon doing on Beatties Ford Road to begin with. They say he was adamant about avoiding the area.

On June 19, two days before the shooting, Stevenson had arrived at Myrtle Beach where his son waited for him to kick off a family vacation. Dairyon, his girlfriend and their three children had arrived the day before.

The men shared a father-son drink, and Dairyon, a lover of fish, expressed how excited he was to go deep-sea fishing for the first time.

Stevenson remembers that when Dairyon returned from fishing, he told him how he wasn’t prepared for the six-hour excursion, but a “guardian angel” on the boat provided him lunch and other things he needed.

“He was so tickled about that woman taking care of him…just grinning from ear to ear,” the father recalled.

That Sunday, Dairyon caught a flat tire on the way back to Charlotte, but he returned to his grandmother’s home in time to catch up with his family — something the Stevensons did regularly.

They talked about their fun moments together on the beach and how Dairyon, who recently had gotten his commercial drivers license, was readying to start truck-driving school the very next day.

Around 8:30 p.m. that evening, Dairyon said his goodbyes to the family and Stevenson retreated inside the house. It was the last time the father would see his son alive.

“As the weeks go by, you want to wake up from it,” Stevenson said. “But you have to realize what has happened happened. It’s something where you have to say God makes no mistakes.”

Gathered outside a small west Charlotte house on Tuesday were generations of Stevensons.

Since 1955, the family’s matriarch, Rosa Stevenson, has called the property home.

Originally from York, S.C., she moved there as a child with her mother and father. Over the decades she’s cared for her children, grandchildren and now great-grandchildren in the same home.

Dairyon’s sudden and violent death has been a blow to the tight-knit Stevenson family, particularly 79-year-old Rosa, who raised him since he was four.

The journey began in the summer of 1988. Dairyon’s mother was in Charlotte from California visiting relatives when she met Kenny Stevenson.

Months later, while a freshman at North Carolina Central University, Kenny just so happened to answer his dormitory’s hall phone at 2 a.m. On the other end was news that he would be a father.

“I didn’t know what to think,” he now recalls, laughing.

When Dairyon was four, his mother, who also had a newborn at the time, reached out and said she thought the Stevenson family could better care for young Dairyon, Kenny Stevenson recalled.

“His momma brought him to me at my job at Johnson C. Smith University,” she said. “And so from then on it was just me and him. We pretty much did everything together.”

One of the things the grandmother and grandson especially bonded over was food and cooking.

Rosa says that’s where she believes Dairyon, who worked as a cook at restaurants like P.F. Chang’s, Maggianos and Firebirds, got his love for the craft.

She smiles while reliving his love of hot fried fish straight out of the pan.

Her smile is replaced by gentle tears when she shares memories from Valentine’s Day two years ago when Dairyon made her grilled salmon and grilled chicken breast on a bed of salad and garlic mashed potatoes for lunch.

“I ate all of it,” she said warmly. “The last birthday I had with him he gave me the amount of one-dollar bills of the age I turned. Two bouquets of roses, four bottles of champagne…that’s the kind of person he was.”

And on occasions like Mother’s Day, when the rest of family came over with hot dogs and hamburgers, here came Dairyon with lamb chops, shrimp and filet mignon for his “sweet thang” Rosa, they lovingly recalled.

With Dairyon’s death anniversary days away, the past few weeks have been especially hard for Rosa, who was “doing okay” for a while, but now she can’t help but feel overwhelmed.

She says she gets signs of her grandson here and there, but she can’t be sure.

After his death, a butterfly came and sat on her front porch for about a week. Then a rabbit came around and wouldn’t leave. And there’s been several times she’s been in the living room and “it felt like somebody touched me in the back.”

“I don’t know if that was him telling me he was okay or what,” she said.

Kenny Stevenson says without a doubt Dairyon loved Rosa and would do any and everything for her.

Dairyon also had another soft spot in his life, his former teacher, Sophia Jackson, who he met as a student at Ranson Middle School.

“She was like a mother to him,” Kenny said. “She followed him to West Charlotte High and she was without a doubt an integral part of his upbringing.”

A beloved Charlotte-Mecklenburg Schools educator, Jackson died at the age of 50 in January.

The news of Dairyon’s death reverberated throughout the west side of Charlotte.

Several days following the tragedy, his former West Charlotte High football teammates retired his number 19 jersey, presenting it in a frame to his children.

Kenny Smith says he was touched by the act.

“That meant a lot to me. One of the parts of his life that was so enjoyable was when he got to high school and when he played football with those guys,” he said. “As a matter of fact, a couple of them still come around to check on me and they show a lot of support.”

This past May on what would’ve been Dairyon’s 32nd birthday, his family celebrated “as if he were here,” they said.

On Father’s Day this year, the Stevensons are making Dairyon’s and Rosa’s specialty — baked spaghetti. They’ll also release balloons in his memory.

“Pray for me and wish me luck” was Kenny’s response to how he’ll get through the day and the one-year anniversary of his son’s death.

While still struggling with questions of why, the father finds comfort in knowing that his son, who lived day-by-day, enjoyed his time on Earth.

“I think he got everything out of life he wanted,” the father said. “The last weekend of his life he did everything he wanted to do.”

A silent march remembering the “Beatties Ford 4” will be on Tuesday, June 22, at 7 p.m. starting at Friendship Missionary Baptist Church.