Installations infuse Charlotte 'with ideas and energy, and innovation and hope' 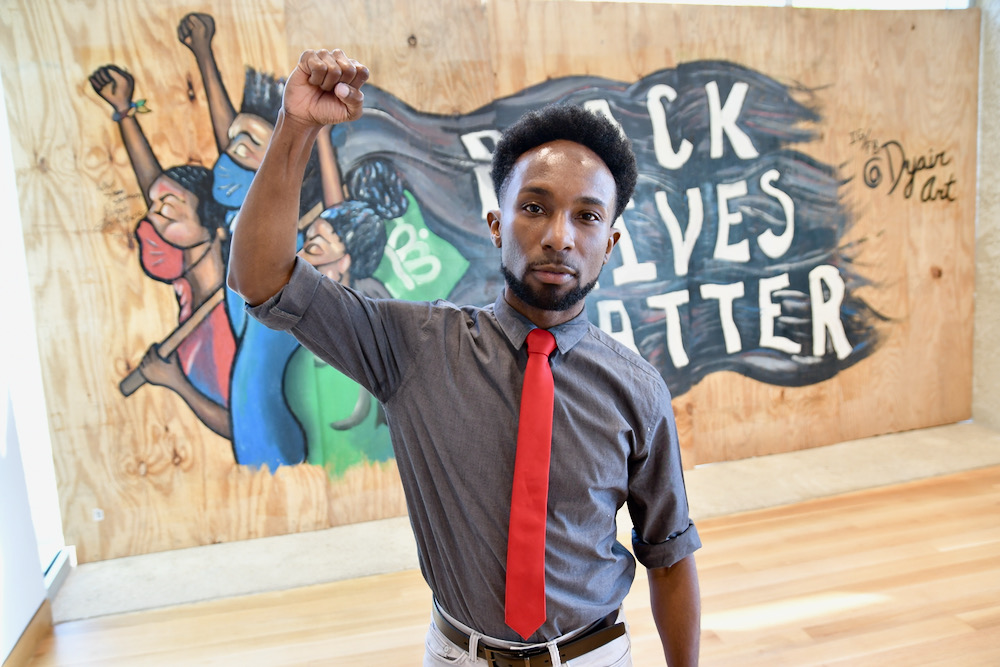 Jamil Dyair Steele, who teaches art at Shamrock Gardens Elementary, was surprised to learn that the Mint Museum wanted to display a mural he painted during last summer's Black Lives Matter movement.

When Jamil Dyair Steele heard that The Mint Museum had purchased a mural he painted as part of the Black Lives Matter protests in summer 2020, he was stunned.

He painted the mural on plywood that was used to cover business windows in preparation for protests that occurred after George Floyd was killed by a Minneapolis police officer. The mural was sponsored by Charlotte Art League, and Steele had heard the league was looking to find it a home.

“I’m still in amazement,” said Steele, who teaches art at Shamrock Gardens Elementary. “When you think of museums, you think of established artists or artists that are more international.”

The purchase, he said, spoke to the Mint’s commitment to community and inclusivity: “They are allowing local artists to be heard and seen, and showcased.”

The Mint’s purchase and displaying of Steele’s art is just one way the museum has been working more closely with local artists, particularly Black and indigenous people of color. Those efforts have only grown since 2018, when Mint President and CEO Todd A. Herman, PhD, created the position of chief curator and curator of contemporary art and hired Jen Sudul Edwards, PhD, to fill the new role.

“Our goal is to not only celebrate Charlotte creatives and to introduce new audiences to the work, but also to present them in a larger context, one that considers how the work they are making and inventing fits into a history of art that can be expansive across time, geography, and materials,” Sudul Edwards said.

Currently, the Mint has multiple exhibitions planned or on display that feature local talent.

Silent Streets: Art in the Time of Pandemic, which opened April 17 at Mint Museum Uptown, explores life during isolation. The Mint commissioned three North Carolina artists, including two artists of color, to create art that spoke to life during the pandemic. The resulting exhibition, which includes mixed media, comic strips and video, speak not only to life during isolation but also to issues of social injustice and systemic racism.

Charlotte-based Amy Bagwell, whose works of art are on display in the exhibition, said having pieces hang in the Mint is affirming. She said she also believes that the Mint’s focus on local artists encourages more creativity.

“It infuses Charlotte with ideas and energy, and innovation and hope,” she said.

The exhibition also includes works by Stacey Lynn Waddell of Durham and Antoine Williams of Greensboro. Charlotte-based artist Raymond Grubb also has a featured work in the exhibition, as do local filmmakers Ben Gellar and Matthew Steele.

Nakima first met Edwards at a local artist’s talk. A trained scientist, Nakima paints on canvas and murals. She painted the letter “M” in the Black Lives Matter mural on South Tryon Street.

Described by the Mint as “kaleidoscopes that unite shards of color with a tight contour line,” Nakima’s works of art include vivid images of plant life and animals.

“I think that a lot of institutions are realizing that it’s important to be a bridge to the voices that are immediately around it in order to stay fresh and also to stay grounded,” Nakima said. “I think in a lot of ways, when there’s not enough connection between institutions and people, a lot of the work tends to be dated and not very informed. I think that this was a great way to pave a healthy conversation.”

MyLoan Dinh followed Nakima as the next Constellation CLT artist. Dinh’s installation, on view through Aug. 29, merges contemporary art traditions and traditional craft methods, speaking to identity and perceptions around nationality, and is reflective of her life experiences. She and her mother, father, and brother escaped Vietnam by boat as Saigon fell.

Sudul Edwards said she looks for a unique voice when selecting artists to work for an exhibition.

“I want to see a real statement that is thoughtful and critical,” she said. “This may mean that the artist is doing something that I haven’t seen before or that they are self-consciously and intentionally taking on something from pop culture, mainstream media, or other artworks.”

Steele said the Mint told him they liked his mural because it “spoke to the energy of the moment.” It shows three Black people, fists raised, with a Black Lives Matter banner. All are wearing face masks indicative of the Covid pandemic.

“They felt it was very powerful in that it summed up the movement that happened here in Charlotte last summer,” Steele said. “It was a great honor to be recognized like that.”

Steele said he often feels a disconnect when he visits an art institution and didn’t see himself reflected in the artists being showcased. He said he’s glad to see the Mint displaying more works by local artists of color and believes it will foster greater dialogue about important issues.

“The Black Lives Matter Plaza and my piece on the panel allows people to sit down and air their grievances and be heard, and also to listen to different points of view,” he said. “The Mint is allowing us that safe space to start that conversation.”