Along with fruits, vegetables and the typical fare, the market will provide health education, guest lectures and healthy cooking demonstrations. 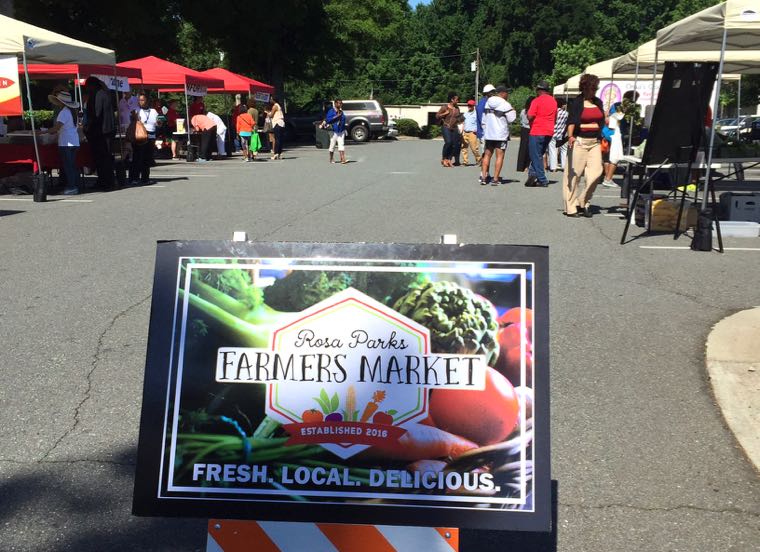 The Rosa Parks Farmers Market will kick off its sixth season with a Juneteenth celebration at a new location in the Historic West End. The market will open Tuesday, June 15, at the West Complex (1600 W. Trade St.).

Along with fruits, vegetables and the typical fare, the market will provide health education, guest lectures and healthy cooking demonstrations.

Stuart said being stationed at West Complex for the season, along with its other attractions, will help the market expand its audience and ultimate mission — to transform lives through access and education.

“We have to do whatever we can to help build up the people in the community and to see them in a place of self determination,” she said. “That includes overcoming the processed foods causing a great deal of health issues like diabetes and cancer.”

Stuart said the market will have dozens of vendors for the 15-week season, including its anchor vendor and partner The Males Place, which offers fruits and vegetables grown locally by 12- to 18-year-olds.

The market was launched in 2016 to address a shortage of healthy food options in historically Black neighborhoods in west Charlotte. According to the U.S. Department of Agriculture, so-called “food deserts” contribute to poor diets, which often lead to obesity, Type-2 diabetes and heart disease.

In Charlotte, the two areas most affected by food insecurity lie within the neighboring zip codes 28208 and 28216, both in the Historic West End.

Stuart said the Market’s mission is to combat health disparities by teaching and enabling food sovereignty, which encourages people to plant home and neighborhood gardens.

“I know that a lot of the problems our people are facing with sickness is due to the food they eat,” she said.

Now at the West Complex, the market joins other anchor vendors, such as HotBox Next Level Kitchen, as a mainstay for the summer season. The complex, which is expected to run through October, features outdoor seating, games, performances, music and food.

The property, which formerly housed an A&P grocery store, was recently given to Johnson C. Smith University by the Duke Endowment. JCSU has not announced its plans for the property.

Stuart said she hopes someone will donate arable land on the Beatties Ford corridor so that the market can grow.

“We would love a permanent place for the Rosa Parks Farmers Market,” she said. “It would have a tremendous impact on the community.”