Officials hope the Alternatives to Violence program can reduce crime in Charlotte communities suffering from a host of social and economic disparities. 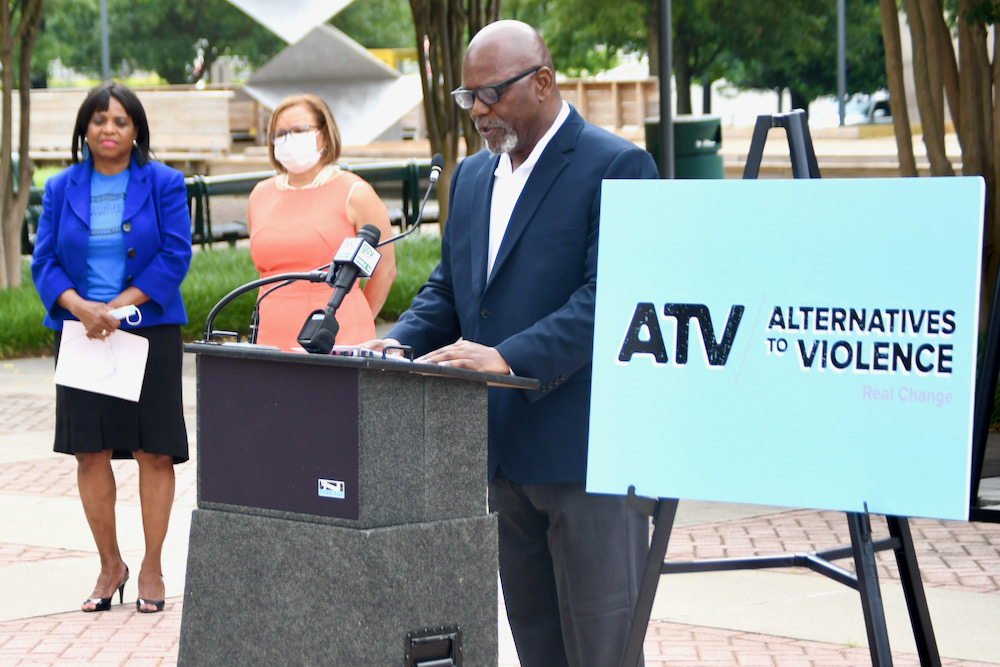 City and county officials unveiled the name of a program they put in place to reduce violent crime in Charlotte, especially along designated corridors, including Beatties Ford Road.

The Alternatives to Violence program will train and pay community members to detect and interrupt potential conflicts before they escalate. Money also will go address some of the chronic problems that can lead to crime, such as youth unemployment.

At a press conference Tuesday outside the Government Center, Mecklenburg County Commissioners Chair George Dunlap said the program is a step toward reducing the violence that is “plaguing and affecting communities.”

For two years in a row, Charlotte has seen its homicide count top 100. As of May 26, the Charlotte-Mecklenburg Police Department had reported 42 homicides for 2021.

“Violence has a domino effect, oftentimes leaving trails of trauma in its path, not only for its victims, but for the community at large,” Dunlap said.

The Youth Advocate Program Inc. [YAP], a national nonprofit known for its family-based alternatives to youth incarceration, will provide 24/7 on-call support for the program. It will also connect the high-crime community with resources for housing, health, mental health and substance abuse support.

Gary Ivory, president of YAP, said the nonprofit will bring to Charlotte what it has brought to other large cities struggling with violent crime — filling gaps left by existing public safety efforts while providing community members with jobs.

“The key to success for YAP’s programs is hiring people from the community from which we are serving,” Ivory said on Tuesday.

Ivory said ATV will create jobs for, and pay stipends to, youth in targeted communities, thus helping them avoid the “underground economy and violence.”

Crime on the Corridor

City officials and community groups have worked for years to contain crime along sections of Beatties Ford Road, especially in the commercial district where Beatties Ford intersects with LaSalle Street.

In January 2020, the Charlotte-Mecklenburg Police Department [CMPD] identified the area around that intersection as one of four “hot spots” for crime, listing drug activity and a homeless population as contributing factors.

Last June, during a block party celebrating Juneteenth, four people died and others were injured when unidentified individuals fired more than 100 rounds into the crowd. No arrests have been made in the case.

The mass shooting on Beatties Ford happened in a year when CMPD reported 121 illegal homicides in the city, which nearly tied a record set in 1993. (CMPD does not include justifiable homicides in its count.)

In response to the climbing homicide rate, city officials announced SAFE Charlotte last October to remedy what they called an epidemic of violence.

In line with SAFE Charlotte’s priorities, 17 community-based groups received $50,000 grants in April to help them address crime and violence. View the list here.

The city also has made an attempt to help those who are victims of violent crime. Under a contract with Atrium Health, victims who enter the Level 1 trauma center at Carolinas Medical Center will be interviewed by a “violence-intervention specialist” who will help victims arrange for social services, such as counseling, gang de-involvement, tattoo removal, help with education, job training or legal assistance.

Data collected by Atrium Health indicate that victims of violence often are re-victimized or often become perpetrators of violence. The SAFE Charlotte program is designed to break that cycle.

Charlotte Mayor Vi Lyles said Tuesday that the city is approaching the violence issue from every possible angle, adding that “there is no single fix to this problem.”

The focus on crime comes as the Beatties Ford Road/LaSalle corridor is going through an economic revitalization of sorts as developers set their sights on what’s considered prime real estate in Charlotte.

One of those developers, Christopher Dennis, is renovating and bringing retail to 2023 Beatties Ford Road. Chase Bank and BW Sweets Bakery have signed on tenants, with more to be announced as the property gears up for a September opening.

Dennis also owns 2020 Beatties Ford Road and expects to begin renovating that building in the fall. Retail shops there are expected to offer food options for community residents, he said.

District 2 Councilman Malcolm Graham told QCity Metro last week that the development and investment coming to the Historic West End is exciting, but “we’ve got to find a way to stop the crime.”

“The violence-prevention programs are paramount for the corridor,” Graham said. “There’s a lot happening on Beatties Ford Road…and all of it is trying to move the community in the right direction.”

On June 10, the city and organizations working with the city to prevent violence will will host a Safety Summit for Beatties Ford Road residents to provide the community with updates and resources.
Register to attend the summit here.