To make that vision reality, Erika Troutman first had to outmaneuver a determined developer with deeper pockets. 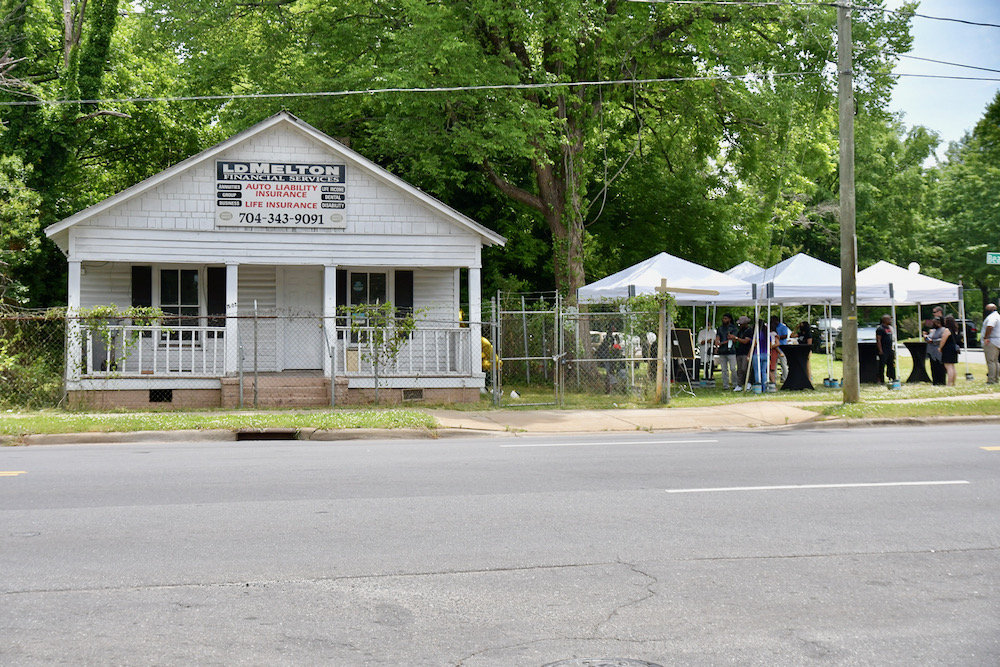 A small building on Beatties Ford Road that once housed the office of a prominent Black business owner is about to undergo a major renovation, the latest in a series of investments by a new generation of young, Black entrepreneurs looking to reshape the Historic West End.

Erika Troutman, the building’s new owner, bought the white, clapboard structure at 1202 Beatties Ford Road in March 2020 and will renovate it to provide office space for small businesses.

On Saturday, surrounded by family and friends, Troutman held a symbolic groundbreaking to signal the start of the renovation work, which should last three to four months.

In an interview with QCity Metro, Troutman said she experienced homelessness as a child. The property, she said, is an investment in her children’s future, to ensure that they avoid some of the obstacles she faced in life.

“To come from that to where I am today was nothing but God,” said Troutman, who works as a finance manager at a local bank. “I’ll never forget that, and I make sure I pay it forward everyday.”

Troutman told QCity Metro that she already has found a likely client who has expressed interest in renting each office in the 1,040-square-feet building.

The building, built in 1926, sits along a corridor that is undergoing significant change. Next door is the recently-built Charlotte-Mecklenburg Police Department’s Metro Division. Less than a block away, a California investor is making plans to redevelop the historic Excelsior Club to include a boutique hotel, restaurant and small music venue.

Johnson C. Smith University is a short walk away, and beyond that, the Five Points area is humming with new investment projects, including retail, a public plaza and the Charlotte Area Transit System’s CityLYNX Gold Line streetcar. To the west, investor Christoper Dennis has purchased two buildings with plans for major redevelopment.

Troutman paid $145,000 to purchase the building, according to property records. For decades, it had been home to L.D. Melton Financial Services, owned by Larry Douglas Melton, a prominent business owner. When Melton died in 2019, the building passed to his wife, Evelyn Melton.

Larry Melton was a 1972 graduate of Livingstone College, where he starred as a defensive tackle on the school’s football team. He had a brief stint with the National Football League team in Washington, D.C., then started his own business, selling insurance and investment products. At one point, Melton’s company had more than $18 million in assets under management, according to a company website. Melton also was known for his prolific fundraising efforts on behalf of historically Black colleges and universities.

Troutman said finding the property was fate. Beating out a developer who also wanted to buy the building required making a connection.

Troutman said she had been searching for a small investment property when she stumbled across 1202 Beatties Ford Road. When she got out of the car for a closer to look, Evelyn Melton, as fate would have it, just happened to be there.

Troutman said she and Evelyn Melton got to know one other and found out they had a few things in common: the finance industry, Delta Sigma Theta Sorority Inc. and community.

When time came to put in an offer for the property, Troutman realized that she was up against “a pretty rich developer” who was outbidding her.

Determined to prevail, she called her real estate agent so that they could remind Mrs. Melton of their earlier encounter.

“I believe she accepted my offer because she wanted it to stay in the community,” Troutman said of the property.

After the purchase, the coronavirus struck, upending Troutman’s plans.

“I think ‘pivot’ would be an understatement for what we endured,” she recalled. “You name it, I’ve encountered it.”

First Troutman found structural issues in the nearly 100-year-old building. Then came city permits and contractors who let her down.

“Forming the right relationships with the community” was crucial, Troutman said.

Originally from Atlanta with no family in the area, Troutman says Adams has become like an aunt to her, something she had wanted since arriving in Charlotte in 2012 with her husband, son and daughter.

“The moment I heard her voice, she was just like, ‘Erika I got you,’” Troutman said.