‘They should have a plan already,’ former school board chair says of CMS as county threatens to withhold funding

Arthur Griffin Jr., who led the board from 1997 to 2002, said the district must be held accountable for results. 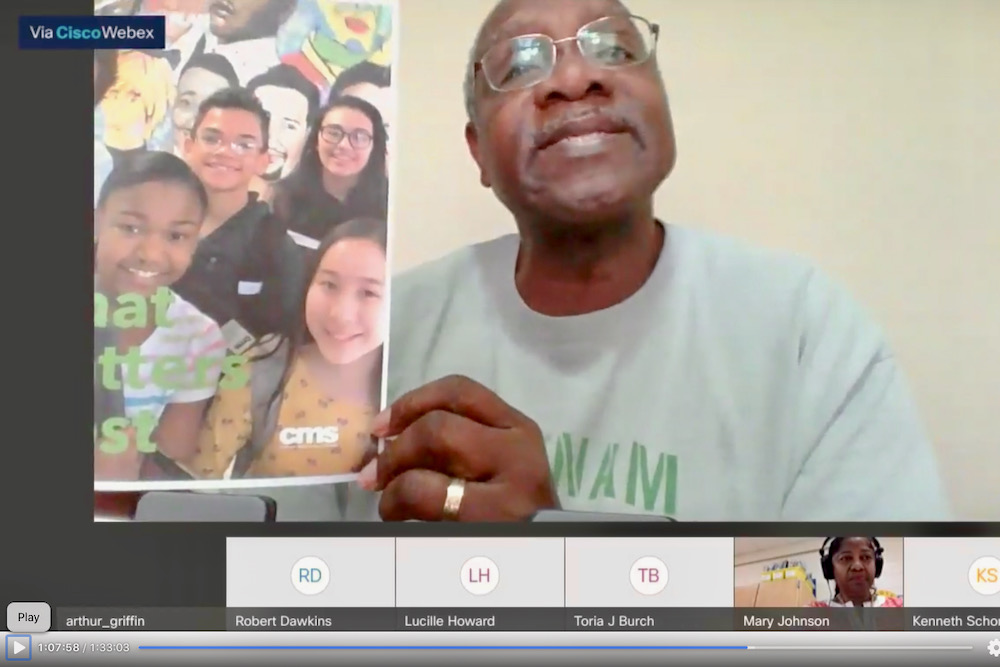 At a meeting of the Tuesday Morning Breakfast Forum, Arthur Griffin Jr., former chair of the CMS Board of Education, holds up a copy of a strategic plan the district produced in 2018 to address achievement gaps.

Former school board Chairman Arthur Griffin Jr. said the county is right to threaten withholding funds from CMS if the district can’t offer a plan to improve its 42 failing schools.

During a virtual meeting of the Tuesday Morning Breakfast Forum, Griffin said the district in 2018 developed a plan or “a brochure” to address the achievement gap and career readiness, but the needle hasn’t moved.

“The number one goal was that every student will graduate with meaningful employment and higher education opportunities,” he said. “Until this day, no one can explain what are the elements of that. That’s why you have such a debate going on.”

In her latest budget plan, County Manager Dena Diorio proposed withholding $56 million — 11% of the total funding CMS receives from the county — until district officials offer a detailed plan to close achievement gaps and address racial disparities — including college and career readiness — for Black and brown students.

Diorio has said repeatedly that her budget maneuver is meant to hold CMS accountable and would not impact classrooms, but some members of the CMS board have pushed back on that notion.

At a Sunday forum hosted by the Black Political Caucus of Charlotte-Mecklenburg, school board member Thelma Byers-Bailey read a statement addressing Diorio’s threat to withhold funds.

She said the district is “disappointed” in the proposal to withhold funds from CMS. If the funds are restored, she said, the district will “pursue the avenues available for us to obtain our sufficient funding,” according to media reports.

He questioned the qualifications of Superintendent Earnest Winston to lead the district and all but welcomed legal proceedings.

“I encourage CMS to take us to court because I’m sure that’s what they’re talking about,” Dunlap said. “Because what they’ll find is, number one, they will use all of those dollars that they say they don’t have to educate children to pay for the lawsuit.”

In a statement provided to QCity Metro, CMS Board Chair Elyse Dashew said board members are “appalled” at Dunlap’s comments, calling them “yet another political distraction by the Mecklenburg Board of County Commissioners.”

“The Board of County Commissioners does not — by North Carolina statutes — function as an oversight board for the Charlotte-Mecklenburg Board of Education. Thus, Mr. Dunlap’s remarks are not relevant,” Dashew said in a statement.

Dashew said the board is working to change a racist system that’s been in place for more than a century.

“It will happen sooner if the county commission works with us, rather than against us,” she said.

The statement did not address whether the board will comply with the county’s request.

At the opening of Tuesday’s county commissioners meeting, Dunlap appeared to offer an olive branch to CMS when he invited CMS leaders, including Winston, to meet with him and other county leaders.

“It is my hope that they will accept this invitation and that we can work towards addressing their concerns,” Dunlap said.

Griffin, who chaired the school board from 1997 to 2002, said the dispute boils down to holding CMS accountability for results.

“They certainly can get that money by simply saying how they’re going to address the 42 low-performing schools,” he said.

Griffin said addressing the district’s failing schools is part of the school board’s normal work, adding, “They should have a plan already.”

Several Black clergy also have voiced support for withholding funds from CMS until the district produces a plan to address outcome disparities.

County commissioners are scheduled to vote on a fiscal 2022 budget on June 1. The budget would take effect on July 1.