53 Ideas invites entrepreneurs to pitch their business ideas to a panel of judges. Finalists get cash and business training. 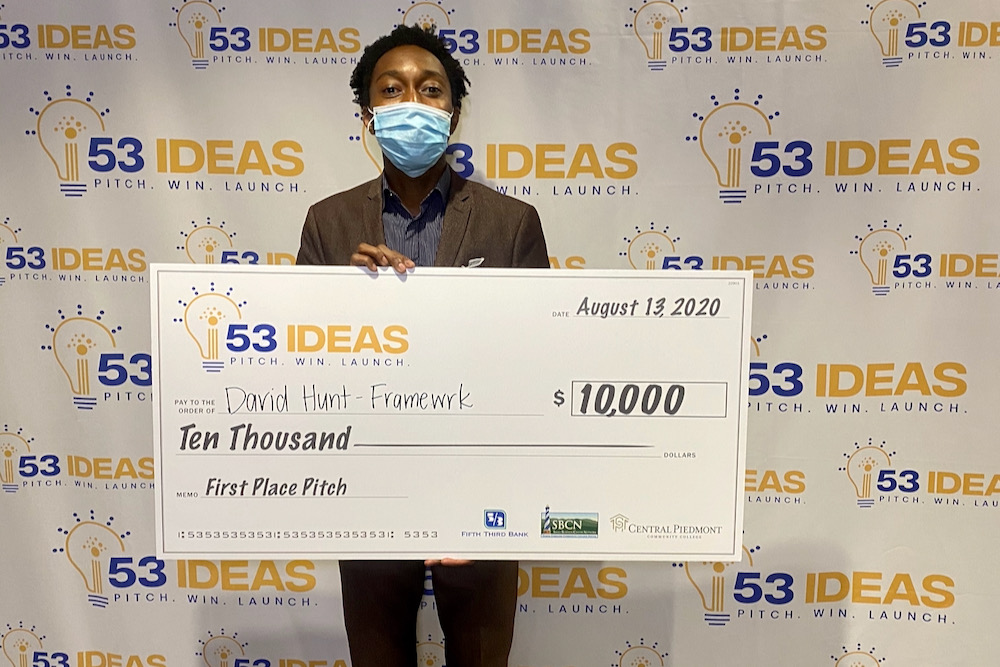 David Hunt was working three jobs last year to support his vision of building a tech company that would use artificial intelligence to assist small business owners. Then his money ran out.

“I had the vision, we had beta testers signed up, we had product designs and clients that I had worked with. The pressing need was capital,” he recalled.

Out of options and with investors looking for a product he didn’t have, Hunt learned of a new Fifth Third Bank competition geared toward entrepreneurs.

Modeled after the popular “Shark Tank” reality television show, 53 Ideas invites entrepreneurs to pitch their business ideas to a panel of judges. Contestants chosen to advance are given training and coaching. The first-place winner gets $10,000.

Hunt entered the competition with a short video explaining his vision. He was chosen as one of 53 contestants and ultimately won the top prize.

Since then, his company, Framewrk, has attracted additional investments, hired engineers and built an app.

“The $10,000 took us a long way, but winning the competition opened up other opportunities, including people reaching out and contributing capital,” Hunt recalled a year later. “Now we are in a completely different place than had we not done 53 Ideas.”

53 Ideas now is entering its second year. Starting May 1 and running through May 31, applicants can apply by submitting 53-second video explaining their pitch.

In creating the competition, Fifth Third Bank’s goal is to support and expand on the innovation that’s bubbling up in the Charlotte area. South Piedmont Community College will lead this initiative in collaboration with Community College Small Business Centers in the region.

53 Ideas is open to anyone in the 10-counties surrounding Charlotte — even to aspiring entrepreneurs who have nothing more than a dream.

During the past five years, Fifth Third Bank has spent $41.6 billion on programs designed to help address community needs, such as investing in affordable housing, promoting economic development and supporting financial stabilization.

While the bank has long offered programs geared to helping existing small businesses, it recently expanded those efforts to include entrepreneurs with viable ideas but no means to get them off the ground.

Last year, organizers had planned for the competitions and workshops to be held in-person, but when the pandemic hit, they moved events online. The bank had expected 50 people to apply, but 177 sent in videos.

Organizers were heartened by the positive response.

It was Dancy, in fact, who came up with the idea of 53 Ideas.

“Lots of service businesses were struggling,” he said, “and it was good to see individuals bring new concepts to the forefront and coming forward. It was good to see how resilient people were in the midst of a pandemic.”

More than a competition

After the first round, competitors participated in a series of workshops on topics including “Understanding the Pitch,” “Customer Discovery” and “Figuring Out Your Financials.”

Hunt particularly enjoyed a workshop about idea pitching facilitated by Juan Garzon, executive director of Innovate Charlotte. Hunt says it helped him understand how to use the power of storytelling to connect with potential investors. He credits what he learned with helping his company secure an additional $30,000 from investors. He also got accepted into an accelerator program sponsored by Ernst & Young.

“The teaching component is very valuable,” Hunt said. “From a strategic perspective, it helped us small business owners think in longer-term ways about our finances, our operations,  and our sales strategy.”

Dancy, the Fifth Third executive, said it was important for the bank to include the educational workshops. Dancy said he will often hear from individuals who are great with the creative aspects of building a business but need help with the operational side.

“They come in and they do not understand bank talk,” he said. “We want to help local entrepreneurs successfully take that pitch to an investor or to a commercial bank for resource support as they grow.”

After winning the 53 Ideas competition, life became much busier for Hunt and Framewrk. He went from having one mobile app engineer, who he was struggling to pay, to having a team of 7 employees.

“Now we are in a completely different place,” he said.

Fifth Third Bank, meanwhile, would like to see the Charlotte-area competition expanded statewide. Dancy also said he’s heard from Fifth Third Bank colleagues in other states expressing interest in adopting a similar event. He also has been pleased to see how those who participated in the competition have used the skills they learned to further grow their business.

“Fifth Third Bank is happy to see other financial institutions applying additional resources to support women- and minority-owned businesses and entrepreneurs that historically have been overlooked in getting seed funding to support their creative ideas that they want to bring to the marketplace,” Dancy said. “We hope this current trend of support will become permanent to help create sustainable economic markets for consumers to use.”

To apply: Submit a 53-second video pitching your business idea. Deadline for submission is May 31, 2021.

Finalists will receive a cash award, plus training and coaching to prepare for the next round.

Framewrk is a mobile app that gives advice to entrepreneurs using artificial intelligence. The app is in beta testing, but Framewrk eventually plans to charge $29 monthly for access.