“We’re reminding people of our Black dollar,” Rivers said during a virtual session of the Tuesday Morning Breakfast Forum. 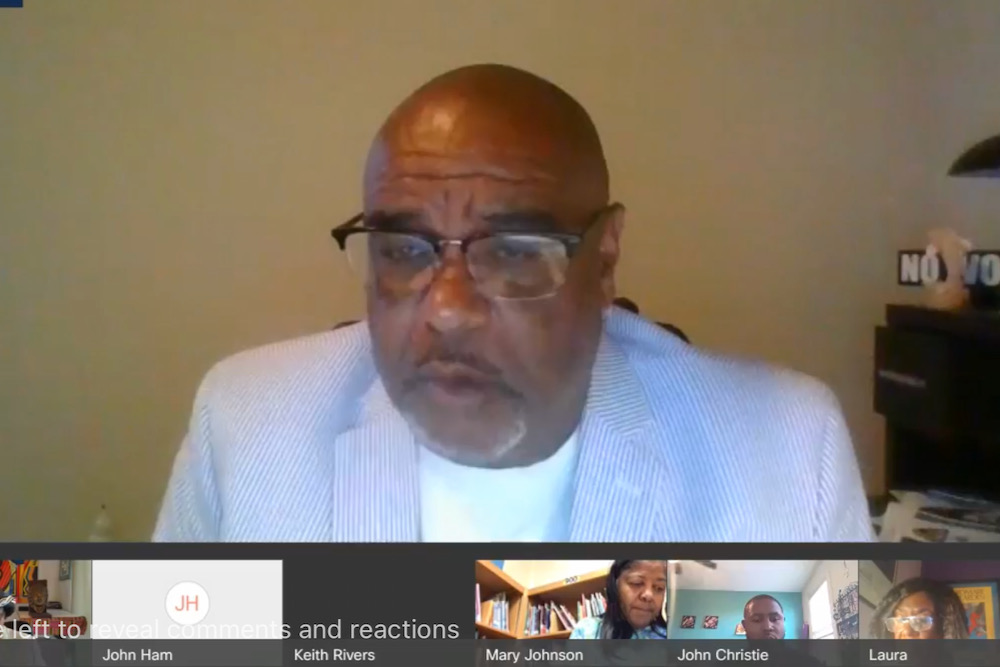 In this screenshot image, Keith Rivers, president of the Pasquotank County chapter of the North Carolina NAACP, speaks virtually to a Charlotte audience attending the Tuesday Morning Breakfast Forum, May 27, 2021.

Keith Rivers, president of the Pasquotank County chapter of the North Carolina NAACP, said the organization, along with groups including Black Voters Matter and Blueprint, is seeking to flex economic clout to achieve justice for Brown and his family.

“We’re reminding people of our Black dollar,” Rivers said during the Tuesday Morning Breakfast Forum, where he spoke virtually to the Charlotte audience.

“We have a bridge that leads to the Outer Banks, where many of our predominantly White communities are, and we shut it down twice a day,” he said. “We also target our main places where businesses are…stretch our lines very long, so that way we have a rolling barricade and no one can get to the businesses.”

Rivers said that in a town economically controlled by White residents, this form of protest is best versus “tearing up the city.”

“I’m so proud of my community,” he said. “We’ve had almost seven days of nonstop protest and have not had one incident of violence. We’re doing it the right way. We are maintaining control of our streets. This is our city.”

Rivers’ comments came on the same day that lawyers for the Brown family released the results of an independent autopsy, which showed that the 42-year-old Brown was shot several times by Pasquotank County sheriff’s deputies. The fatal injury, according to the lawyers, was a gunshot wound to the back of Brown’s head.

Law enforcement officials in Pasquotank County have said little about the events that led to Brown’s death, which happened while deputies were attempting to serve a warrant for Brown’s arrest. Lawyers for the family have been joined by the NAACP and community activists in demanding that the authorities release video footage of the shooting that was captured by the deputies’ body-worn cameras.

Speaking to the Breakfast Forum, Rivers said acts of protests aren’t stopping at the Pasquotank County business community. He and others have demonstrated at the city attorney’s home, asked for the sheriff’s resignation, and have requested that a special prosecutor be appointed to oversee the case.

Rivers said he is hoping that, with national media attention and the arrival of well-known civil rights lawyers, such as Ben Crump, who most recently represented the family of George Floyd, who was killed by a police officer in Minneapolis, there will be accountability and visibility.

“Elizabeth City is what I call the media desert, because we get no North Carolina news (coverage),” he said. “You don’t see us; we don’t see you.”

On Monday, Brown’s family was allowed to view a 20-second redacted video of the shooting, according to the family’s lawyers, one of whom later labeled what she saw as an “execution.”

Rivers said the family’s devastation was apparent after viewing the footage.

“When they came out, I’d never seen that many Black men break down and cry,” he said.”

A court hearing on access to the video is scheduled for today.