"The system did what it was supposed to," CMPD Chief Johnny Jennings told reporters Tuesday, shortly after the guilty verdict was broadcast live nationwide. 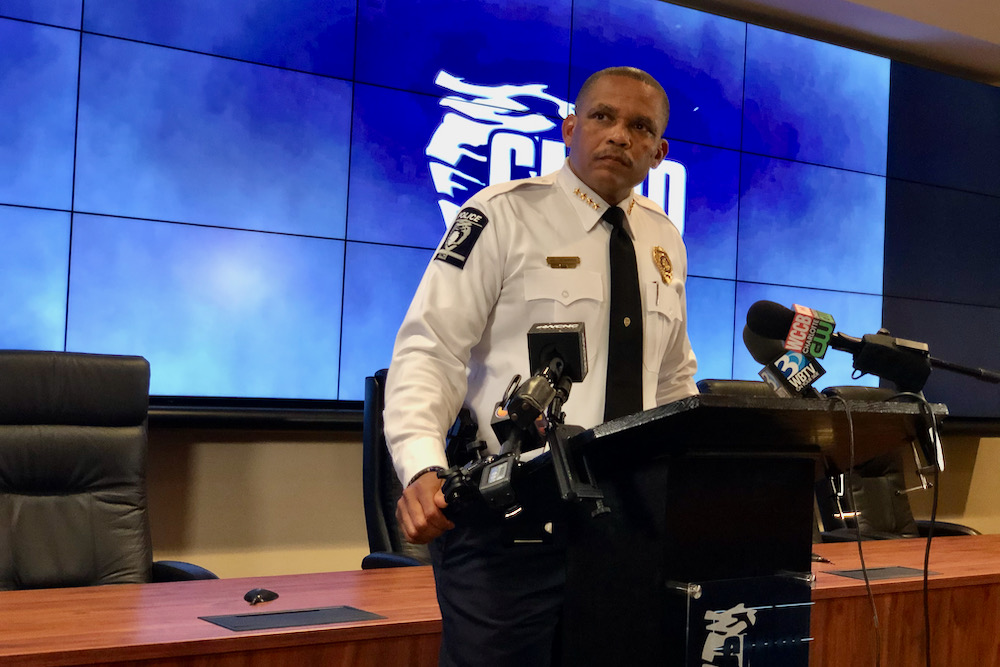 After deliberating for about 10 hours over two days, the jury found Chauvin, who is White, guilty on all charges — second-degree murder, third-degree murder and second-degree manslaughter. He faces up to 40 years in prison when sentenced, though legal experts have said that Chauvin likely will receive a far lighter sentence.

Shortly after the verdict was broadcast live on television Tuesday, Jennings met with reporters to issue a statement and field questions. Among other things, he said he hoped that the guilty verdict would help build trust between the public and law enforcement, even 1,100 miles away, here in Charlotte.

“The system did what it was supposed to,” Jennings said, adding later: “I’ve always taken the stance that there’s no way that you could ever justify such an act by an officer. And like I said, we’ve been waiting over a year to see what the results would be, and this is where we landed.”

A video of the events that led to Floyd’s death showed Chauvin kneeling on Floyd’s neck for nearly nine minutes while Floyd lay handcuffed on the ground. Medical experts testified that Floyd died from a lack of oxygen.

When asked what message he would deliver to his patrol officers in the wake of the guilty verdict, Jennings said: “The message has always been that we have some clear and pretty clear guidelines, and we have to be within the laws ourselves. …We haven’t met any officer or any person that feels like what happened in Minneapolis is justified. I think our officers realize that when you step out of the boundaries and you step out of bounds, we have to be accountable for that.”

At the same time, Jennings cautioned against reading too much into the Chauvin verdict as it relates to the future of policing.

Here are some other local reactions to the verdict:

“Merriam-Webster defines justice as: ‘the maintenance or administration of what is just especially by the impartial adjustment of conflicting claims or the assignment of merited rewards or punishments.’

“Although we may celebrate today’s verdict and the impending imprisonment of Derek Chauvin for the murder of George Perry Floyd, Jr., as a representation of justice; his loved ones and the Black community are far from receiving meritorious reward.

“Too many times, our Black fathers, sons, brothers, uncles, nephews, cousins and friends have been the victims of injustice that has cost them their livelihoods, limbs, liberties and lives.

“Time will tell whether this verdict will be the flint that ignites the flames for racial justice. Until then it is imperative that we continue to fight against racial inequities and injustices and build coalitions for justice reform and restorative justice!

“Now is not the time for complacency but action!”

“I hope this verdict brings some measure of closure to the family of George Floyd. George Floyd’s death and this trial should give us pause. Another black man lost his life. Finally, justice was served. I hope everyone respects the result and understands this will not be the last time we have to address a situation like this. Change is needed and we should all be a part of the change.”

“Today, a jury of his peers found former Minneapolis Police Officer Derek Chauvin guilty on all three charges in the death of George Floyd. While the system worked to hold Chauvin accountable for his criminal actions, we know the decision will never return Mr. Floyd to his family, friends and community.

“At the Mecklenburg County Sheriff’s Office, we believe in the sanctity of life and treating everyone with dignity and respect. We have a moral responsibility to protect people in our custody from harm. As Sheriff, I believe policing is a noble profession – yet I also know that not all individuals feel equally protected.

“Justice was served today, and while that will not bring back George Floyd or the countless thousands lost to state-sanctioned violence, it means the millions of Americans struggling, fighting to breathe free are closer to living in a just, beloved community. Thank you to the judge, the jurors, and the officers of the court for your work,” said Adams.

“However, in spite of today’s verdict, our work continues. The Senate must pass the George Floyd Justice in Policing Act to ensure that no other father, mother, son, daughter, aunt, uncle, sister, brother or loved one again dies at the hands of the police without accountability. Without passing the bill that bears his name, true justice for George Floyd and countless other victims still remains to be served.”

“I am pleased that justice has been served today in the trial of Derek Chauvin. This verdict is a step in the right direction to address systemic racism that is too often evident in America’s policing. I as well as the students of Johnson C. Smith University – many of whom protested for justice following Mr. Floyd’s death – grieve with the family and friends of George Floyd. This verdict is not a cause for celebration nor does it change past events. However, it does serve as a new precedent for justice in our nation.”

The QCity Metro staff contributed to this report.