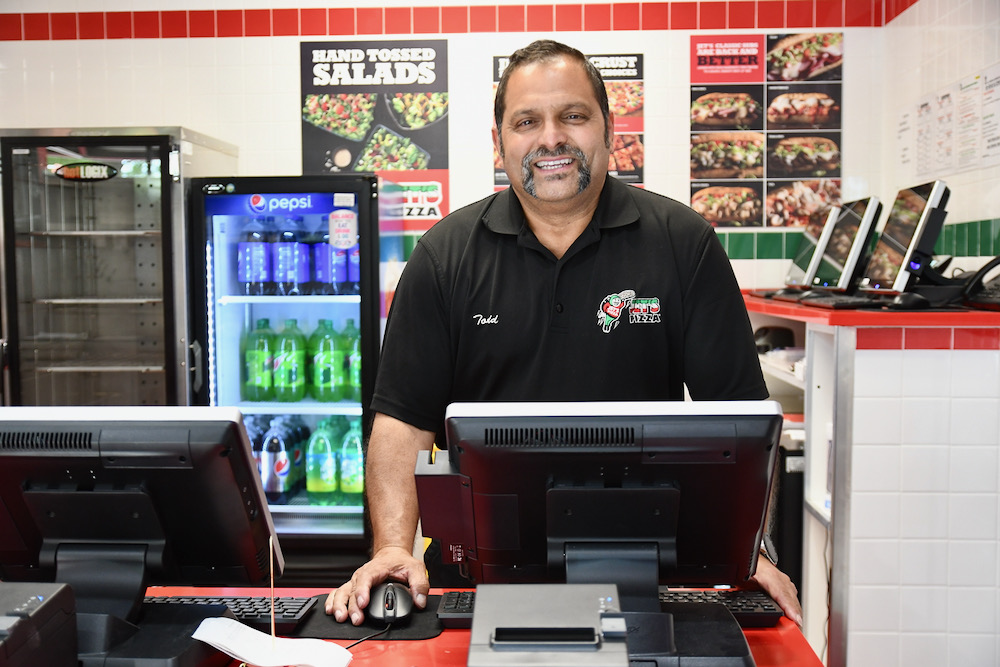 Todd Martinez, who spent more than 30 years in Detroit's automotive industry, is preparing to open his third Jet's Pizza franchise in the Charlotte region --his latest one in Historic West End. (Photo: QCity Metro)

In a matter of days to weeks, Martinez and two other business owners of color will move into the newly renovated building at 1800 Rozzelles Ferry Road.

The structure was bought by local business owner Dianna Ward’s investment company, Sankofa Partners LLC, in December 2019 for $1.2 million, according to property records.

By the summer of 2020, the group had three lessees, including Martinez’s Jet’s Pizza.

[Related: Change Agents: In the shadow of JCSU, Dianna Ward is creating a new retail environment ]

For three years, he unsuccessfully attempted to bring a store to the West End after buying a home in the area. Then one evening he got a knock on the door.

“I thought maybe it wasn’t meant to be until Rodney Faulkner, the broker for the location, physically knocked on my door one night,” he recalled. “I said, ‘Let me think about it.’ That was a year and a half ago, and today it’s a reality.”

Pending the city’s green-light for his certificate of occupancy, Martinez will open his third Jet’s Pizza any day now.

He says the process has been a struggle, mostly because of setbacks due to the coronavirus pandemic.

“It’s caused delays with materials. I should’ve been open a good handful of months ago, but again this is a 1940s building that got renovated, so that didn’t help matters either,” he said.

The shop will offer the franchise’s signature Detroit-style deep dish pizza as well as hand-tossed, thin-crust, cauliflower crust and NY-style pizza. Salads, breads, sandwiches, wings and desserts also will be on the menu.

Martinez knows many people in Charlotte haven’t heard of the Michigan-based franchise, but he believes that with one taste newcomers will be sold.

“When customers walk in I push the deep dish,” he said. “It’s crunchy, we use two percent mozzarella, the best mozzarella there is. We chop our vegetables and make our sauce and dough fresh everyday.”

Road to the Pizza Business

Before Martinez owned pizza franchises, he logged 30 years in the automotive business in Detroit. Then the 2009 recession hit, leading to the almost collapse of the country’s financial markets. The big automakers — GM, Ford and Chrysler — took a pounding, too.

For Martinez, life as he knew it began to crumble.

“I missed three months of getting a paycheck in 2009. It was a rough year,” he said.

With not many options, he took a chance on getting into the pizza business when a friend, who owned 40 Jet’s Pizza franchises, suggested he give it a try.

Martinez took the idea to his brother-in-law, whose job had brought him from Detroit to Concord, N.C., a decade prior.

His brother-in-law agreed for them to open a Jet’s Pizza. Soon after, Martinez packed up his truck solo and headed south to build a new life in Charlotte.

“My brother-in-law pretty much picked me up off the ground at the time,” Martinez said. “It was a rough time. I ain’t gon’ lie. I had to leave my wife and daughter in Michigan for a year and a half.”

With his livelihood on the line, Martinez worked — hard. Seven days a week. Ninety hours a week, he says.

“It was a grind, a major grind,” he said. “And this new store will be a major grind as well, but I think there’s a lot of good things that’s going to happen here now.”

The new retail at Five Points is part of an economic revival of sorts happening in the Historic West End.

Along with Jet’s Pizza,  Rita’s Italian Ice and a Black-owned pharmacy are joining the cohort at 1800 Rozzelles Ferry Road.

Led by Dr. Martez L. Prince, Premier Pharmacy and Wellness Center is expanding from its first location on Monroe Road to the West End, where it will be the only standalone drugstore in the corridor.

No word on if an opening date has been set.

Just steps away from the building, the sounds of trucks beeping, hammers nailing, and drills hitting the concrete signal that construction continues on Five Points Public Plaza.

The $5.5 million project will be a gathering space for the communities surrounding the intersection of Beatties Ford, Rozzelles Ferry and W. Trade, known as Five Points.

Slated to open this summer, the space will include a small amphitheater, a splash pad, outdoor seating and public art.

South of the plaza, more construction is happening on W. Trade down to the I-77 underpass. Workers are putting the finishing touches on the Charlotte Area Transit System’s (CATS) CityLynx Gold Line streetcar.

When completed, the $150 million, 10-mile project will connect east and west Charlotte going from Johnson C. Smith University to uptown, through the Elizabeth neighborhood and ending at the Hawthorne Lane Bridge.

For Melanie and Justin Powell, these economic developments are what drew them to put their second Rita’s Italian Ice in the Historic West End. That and the couple’s alma mater, Johnson C. Smith University.

“For me it was Bull’s Pride that brought me back,” she said. “It was pouring back into a community that poured into me. Because I want to be part of the change for the right reasons.”

Melanie, a healthcare professional by day, and Justin, a Charlotte-Mecklenburg school teacher, started eyeing Rita’s as early as 2012, when they stumbled across one in their former Mallard Creek neighborhood.

“Being from the northeast (Boston by way of Delaware) I was excited to see a Rita’s,” she said. “I said to him [Justin], ‘This would be something I wouldn’t mind doing to diversify my portfolio’…you know take on a franchise.”

Over the years the idea of opening a Rita’s franchise never left Melanie’s mind.

With no experience, the Powell’s took the leap, contacting Rita’s corporate to open their own store.

After securing one location, Melanie says she called them right back and asked for two instead — a bold move for a novice.

“I just really betted on myself and I really wanted to do it,” she said. “I really loved their product and I thought it would be a good way to start a family business.”

The Powells opened their first Rita’s Italian Ice just across the stateline in Fort Mill, S.C., in January 2020. But by March, the coronavirus pandemic had temporarily halted business.

Melanie says that even in the midst of uncertainty for their first store, when Faulkner approached her about opening a second location in the Historic West End, she jumped on it.

“A lot of people were like, ‘It’s too early; don’t do it,’” she said. “ But I didn’t want to miss this opportunity to be a part of this change. It’s a gamble I’m willing to take.”

Though the Powell’s were sold on the concept of bringing their business to the West End, they had another hurdle to climb — convincing Rita’s corporate, a process that took months.

“They didn’t quite see the vision based off of things they had heard, or by looking at the location on a map,” she said. “I had a representative fly down and we toured the area and walked the campus.”

“I told them don’t look at the barbershop you see now,” she said, referencing the business that had once occupied the space. We had to sell the vision beyond what their eyes could see.”

For reinforcement, Melanie brought in Ward, the property owner, and J’Tanya Adams, who leads the economic development group Historic West End Partners, to meet with the Rita’s representative and explain the concept.

“I even wrote a letter to the CEO,” Melanie said. “I was not taking no for an answer.”

Now over a year later, with an opening day set for Friday, May 7, the Powells are slowly breathing a sigh of relief.

They’re busy filling their store with equipment and, eventually, Rita’s products, featuring a bevy of flavors from chocolate candy mix-ins to Italian ice made with real fruit.

That’s not all. The Powells also are bringing gourmet popcorn by The Poppin’ Sweets to their new West End store, a signature feature of their Fort Mill location.

Melanie says the neighborhood is evolving from her college days, but the essence of what she found when she was dropped off as a freshman in August of 1994 remains: pride and community.

“We’re still connected here. My nephew is a student at Smith, my best friend lives around the corner, my husband’s good friend, David Powell, is down the street at No Grease.”

Correction: This article was updated to correct a misstated relationship between Justin Powell and David Powell. The two men are not fraternity brothers.