As a Black grower, Hemp in Everything CEO Chyncia Rodgers may be an anomaly in the emerging hemp industry. 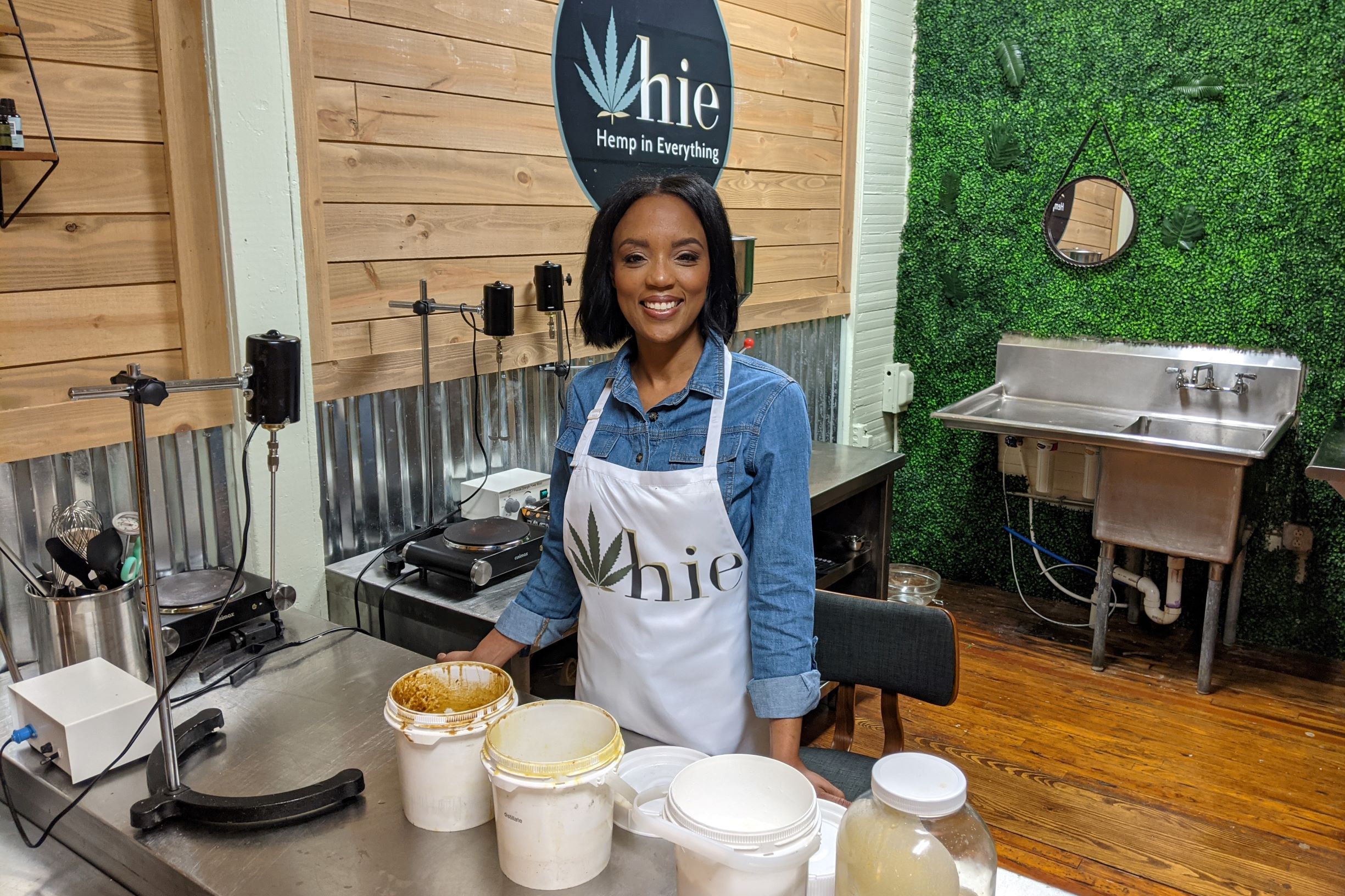 Chyncia Rodgers, CEO of Hemp in Everything. Photo: QCity Metro

Inside a warehouse near downtown Gastonia, Chyncia Rodgers shuffles between rows of potted hemp plants. It’s the lab for her latest business, Hemp in Everything, a seed-to-sale hemp company that cultivates, manufactures and distributes USDA-approved products.

Like a tour guide, Rodgers walks through the facility explaining the steps necessary to create outdoor elements for the indoor hemp farm. Overhead lamps mimic sunlight and help create humidity, while electric fans provide the wind. The company is transitioning to hydroponically grown hemp — a soil-free environment where the plants grow in nutrient-rich water. Instead of the 12- to 14-week normally required to get from seed to flower, Rodgers estimates her water-based growth cycle is closer to eight weeks.

As a Black grower, Rodgers may be an anomaly in the emerging hemp industry, which is expected to top $26 billion by 2025. While the exact number of Black hemp growers is unknown, Black farmers represented only 1.4% of all U.S. farmers in the 2017 Census of Agriculture.

Hemp derives from the same cannabis plant species as marijuana, but it produces less tetrahydrocannabinol, or THC, the psychoactive component that creates the “high” traditionally associated with marijuana.

[Related: Hemp is a hot crop, so why are so few Black farmers growing it?]

The overhead costs make growing hemp indoors an expensive endeavor, Rodgers says mainly due to electricity costs, but it can be more profitable than growing outdoors where the elements are more unpredictable. Regardless of the method, hemp is a high-value crop.

“You create that environment, which is great in the long term because you can grow all year,” said Rodgers, the company’s chief executive officer, “but you will have those power bills. Our most expensive power bill was about $2,000 in one month.”

Rodgers experienced firsthand the challenges of getting her foot in the door to the hemp industry.

Two years ago, she knew barely anything about the plant. Her background is in cosmetics, where at the height of her career she served as regional director for one of the nation’s largest medical spas. Alongside her husband, Mick, she also runs Rodgers Bail Bonding in Gastonia.

A friend initially approached Rodgers with an idea to enter the cannabis industry. In 2020, she turned her attention to hemp after reading studies about the possible benefits of cannabidiol, more commonly known as CBD. CBD is an extract from the cannabis plant that’s used in everything from cookies to lotions with claims ranging from pain relief to easing anxiety to treating cancer.

Rodgers saw the opportunity to combine her experience in medical cosmetics and love of gardening with the desire to help people and create another stream of revenue.

She needed an industry insider because months of unreturned phone calls and emails from farmers and labs weren’t getting her any closer to learning how to grow hemp and produce CBD.

“It’s a close-knit society, and if you can’t get in, then you’re not going to get the information,” she said.

She lucked up when she was referred to Charles Fesquet. A former Army medic, Fesquet is a state-licensed hemp grower and processor who previously owned Hemp and Honey Farms in Kings Mountain. Fesquet — who is White — entered North Carolina’s hemp industry as a processor for farmers in the Industrial Hemp Pilot Program, the state initiative that established rules related to licensing and growing the crop.

Rodgers says they met and he spent nearly four months educating her about the process of turning the hemp plant into CBD oil. As Hemp in Everything started to take shape last summer, Fesquet joined the business as chief operating officer.

“I think what has helped me, if I’m being honest, is the fact that my partner is White,” she said. “It’s been a blessing to have him because otherwise, I would be stuck still trying to find out important information.”

They formally launched in October with a line consisting of skin care, hair care and wellness products. Rodgers handmakes all of the items, drawing on her acquired knowledge about the plant and experience of working with doctors and chemists in the cosmetic industry. She says that each product undergoes third-party testing at a lab in Colorado to calculate the amount of CBD in it. Customers can view a Cannabinoid Profile for each item on the website.

While topical products, CBD oils and tinctures with less than 0.3% THC are legal according to North Carolina’s Department of Agriculture and Consumer Services, the Food and Drug Administration has stated that adding CBD in foods for people and animals is illegal. [CBD is the active ingredient in an FDA-approved drug for seizures; the FDA prohibits active ingredients from being added in foods.]

All in the family

That partnership is another family business. Owner Jay Davis is Rodgers’ son-in-law.

Davis had the idea to add a hookah element to the dive bar and reached out to his mother-in-law. He said within an hour they had a gameplan to include CBD-infused shisha for hookah pipes with flavors like PB&J, peppermint latte and caramel apple.

“It’s such a joy in having family who’s also like-minded,” Rodgers said.

Hemp in Everything helps meet a bottom line that’s bigger than simply being a businesswoman. It’s about building a legacy and providing a better future for her family.

“It’s setting the foundation for our kids to have a great start to create their own resources.”