Under "JCSU Connect" students at the community college will be offered a seamless pathway to a JCSU degree. 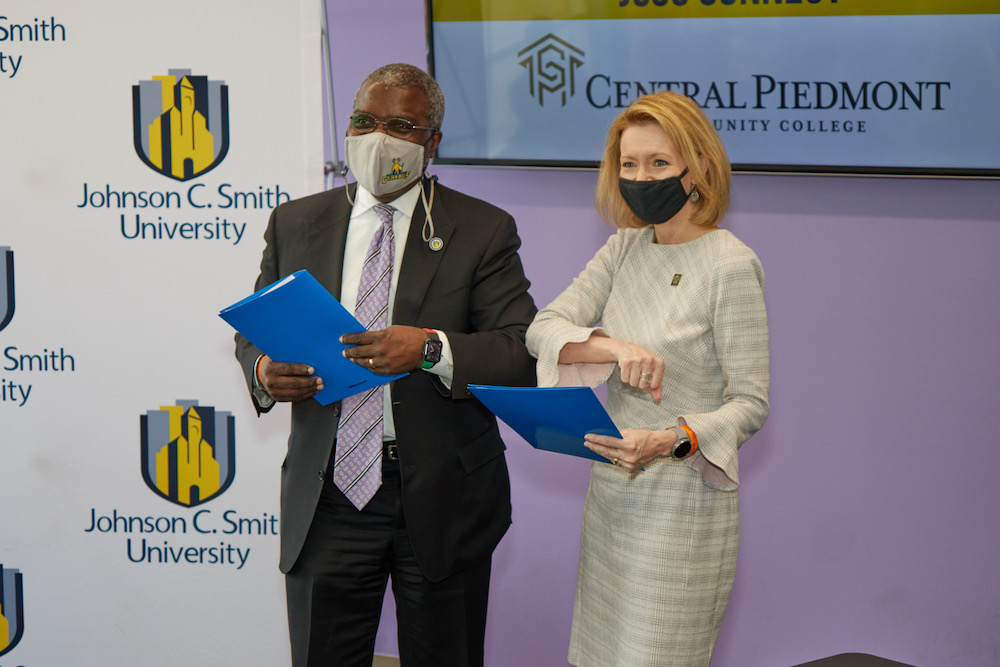 Each year about 1,200 students leave Central Piedmont Community College then go on to various degree programs at other schools. Few end up at Johnson C. Smith University, less than four miles away.

On Thursday, JCSU and CPCC announced a joint effort to change that.

Under a new bachelor’s degree pathway called JCSU Connect, students will complete an associate degree at CPCC before transferring to a degree program at JCSU. Those who finish CPCC with at least a 3.0 grade point average will be eligible for an $8,000 annual scholarship and other financial aid at JCSU.

“While we have had a number of students transfer to Johnson C. Smith, I think with the intentionality of today’s announcement we will see those numbers rise. I look forward to standing here in a year or two celebrating those increases,” CPCC President Dr. Kandi Deitemeyer said Thursday.

JCSU Connect will begin this August, with its first cohort of students transferring to JCSU in fall 2023.

Upon enrolling at JCSU, students in the Connect program will be placed in an on-campus, paid internship that correlates with their majors, paid for by the federal work-study program.

For those who intend to major in psychology, they will follow a guided pathway that starts in their first term at CPCC. The credits earned in community college will seamlessly transfer towards a bachelor’s degree, says the university. Additional pathways will be announced in upcoming semesters.

At Thursday’s announcement on the JCSU campus. Armbrister noted the 2014 Chetty study, which ranked Charlotte last out of 50 major U.S. cities for economic mobility.

“The study is a reminder of the work we have to do as one of the country’s fastest-growing metropolitan areas where there is a myriad of resources and opportunities,” he said. “We want to educate students and keep the local talent here.”

The first JCSU Connect students will be psychology majors. Additional “pathways” will be announced in later semesters.

While at Central Piedmont, the students will have access to JCSU libraries, faculty and facilities.

“The overall goal of the program is to put students on a guided path to a bachelor’s degree, preparing them for a meaningful career or graduate study,” the two schools said in a joint statement.

To qualify, CPCC students must enroll in a full-time course load, maintain a 3.0 grade point average and complete an eligible program of study in the semester immediately preceding their transfer to JCSU.