When the Covid-19 pandemic shut down her South Boulevard salon, Lisa Fuller used her time away from the shop to accelerate her business plan. 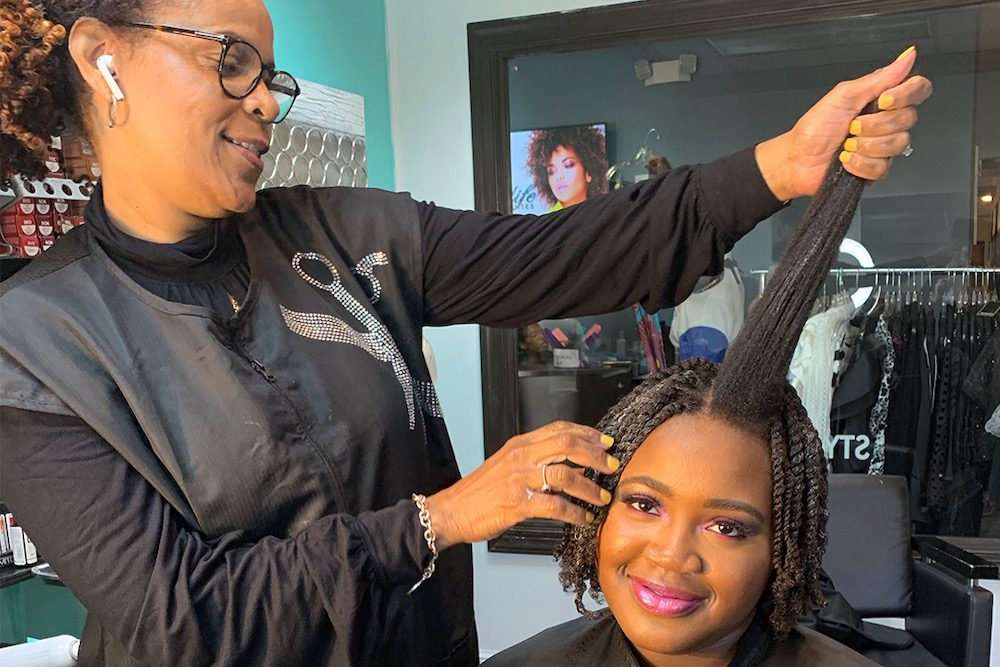 Lisa Fuller, left, who owns a Charlotte hair salon, works with a client in her South Boulevard shop. (Photo: Courtesy of Lisa Fuller)

Lisa Fuller, owner the south Charlotte hair salon Styles by Lisa, is among a growing number of Black women entrepreneurs seeking to gain a foothold in the multi-billion dollar industry for natural hair-care products.

At the start of the 2020 pandemic, Fuller and her husband, Andre Fuller, launched My Curl Products, a product line made for natural hair textures. Their products includes shampoo, conditioner, leave-in conditioner, foaming mousse, hair gloss, a serum and curl sauce.

Getting into the industry on the product side was a natural progression for Fuller, who opened her South Boulevard salon in 2004.

“When I first came to Charlotte I wanted to specialize in natural hair, especially helping women to embrace their natural hair,” she said. “I was really against relaxers, as well as women and children feeling negative about their hair textures. I wanted to change that.”

The Los Angeles native says her interest in natural hair can be traced to her childhood, when natural hair was less appreciated in Black culture.

“I have three sisters and one brother, and they would always say, “You got the good hair; we got the bad hair.” I used to hate hearing that,” she said.. “And for my daughter, I did not want her to feel bad because her hair texture wasn’t soft.”

Last March, as the Fullers readied to release their product line, the pandemic struck. The couple had spent months traveling the country to promote the brand, including on social media.

Salon and business owners prepared for the worse. In North Carolina and other states, hair salons were ordered closed to halt the spread of Covid-19. Fuller’s Charlotte salon would be closed for about three months.

With no clients and no business, the economic impact was felt immediately.

For fuller, however, the pandemic-related closures also presented a business opportunity. With clients unable to visit their favorite salons, she walked virtually with women, teaching them how to style their hair at home, all while using her new product line.

“When the pandemic happened, everything that I was trying to push for my clients went into effect,” Fuller recalled. “I told them this is what I’ve been preparing you for. You got the products, you got my support and my training…it was empowering for them.”

Fuller credits her social media presence, where she has nearly 90,000 Instagram followers — @stylesbylisa — for helping to launch her product line, which is sold over the internet.

She also points to the marketing skills that she and her husband honed during their collective years in the music industry.

Andre’s career in music began as a college student working at Tower Records as a manager, buyer, and Billboard reporter. He went on to work at MCA Records, Motown Records and Solar Records. He held a variety of jobs in sales, marketing, and radio and video promotion.

For Lisa, her music journey began at the now-defunct Wherehouse Records, where she worked as a music buyer and Billboard reporter. She later transitioned to BMG as a Black music product development coordinator and regional sales rep.

Now, just as she ascended the ranks in the music business, she is confident she can do the same in the hair care industry — an industry dominated by Black spending but where only 3% of companies are Black-owned, according to a study by the Beauty Supply Institute.

Caring for Black hair has long been a lucrative industry in the United States.

Madame C.J. Walker notably launched a hair care line in the early 1900s and became the country’s first self-made woman millionaire. In 2020, Netflix profiled the trailblazing entrepreneur in an original miniseries, “Self Made.”

The sale of Black hair-care products in 2018 accounted for an estimated $2.51 billion, according to market research firm Mintel.

One of the fastest-growing sectors of that market has been in products devoted to women who prefer their hair untreated with chemicals. In recent years, retail stores have gone from offering just a handful of products for natural hair to entire aisles devoted to nothing else.

It is that natural-hair trend that Fuller now hopes will make her product line a success.

She recalls in the past trying to convince some women to go natural and being met with skepticism. Now things are different. Fuller says she gets inquiries from around the nation, and even from places such as Brazil, Canada and Africa, from people looking for natural hair solutions.

The Fullers say they want to get their products in stores and natural hair salons nationwide once pandemic conditions allow for more face-to-face interaction. Meanwhile, Fuller says she will continue laying the groundwork, just as she has since the pandemic began.

“I just have a passion for helping women with their natural hair challenges and getting them to feel comfortable with their texture,” she said. “That’s my thing.”