‘I hope I see him’: 2-year-old Charlotte influencer goes viral after visit with grandpa

Cami hadn't seen her grandpa in months, and their exchange following a recent visit took over the internet. 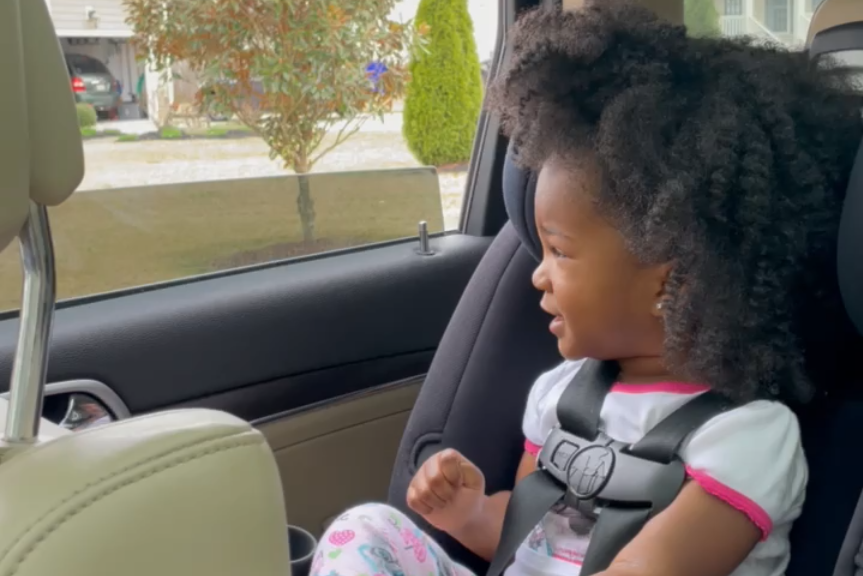 It’s been less than a year since Charlotte resident Colette Louis started creating content featuring her 2-year-old daughter, Cami. In that time, the toddler known for her big laughs and big ‘fro has racked up a huge following: 2.3 million followers on TikTok; 66,000 on Instagram; and 3,100 on YouTube.

Yet, it was Colette’s video of Cami blowing kisses to her grandpa after a visit to Greenville, N.C., and the tender moment that followed, that broke the internet and tugged at our heart strings. As of March 23, the clip has 56 million views on TikTok and more than 92,000 likes on Instagram.

Watch the video below and read on to learn more about the kid influencer and behind the scenes of the viral moment.

Q. Take us behind the scene of the recent video with Cami saying goodbye to her grandpa. It was the cutest thing I saw all week.

Cami is understanding families. She’ll say, “I miss my family. I love my family.” She understands what a family dynamic is.

She has a picture on her vanity of my parents and her because they’re besties. One day we’re in her room and she says, “I miss my family” and starts crying. I had to FaceTime my dad. I’m thinking, we have to figure out a way to get out there. We hadn’t seen them in months. They used to visit us maybe about once a month.

We go to visit, just me and her because my husband had to work. They had the best time. We were leaving to come home, and they’re saying their last goodbyes, and she starts crying. She’s never cried when they left before. I call my dad and say, “Can you come back for one last goodbye?” They have a thing where they blow kisses and catch it. That’s what they do on FaceTime. I said, “Let me record this.” That’s all it was; I was going to show my dad the video later.

What people don’t realize is she pauses for a second and looks at him. She’s actually holding back tears and waiting for him to walk away. As soon as he turned around and walked away, then she looked at me, and that’s when she said, “I hope I see him.”

As soon as she started crying, I stopped the camera because I try to be sensitive to her.

I post normally on Monday morning. I posted it that Monday while I was at the grocery store and forgot about it. I checked it when I got home, it was about 70,000 views, which is really great. Then, I unloaded the groceries and saw it was at 700,000, and I said, “Oh my God, what is happening?”

Q. Cami’s the star, and you’re behind the scenes. How did you get into content creation?

We own a photo booth company, QC Booths, and a marquee letter light rental company, QC Lights. We were doing so well that it allowed me to be a stay-at-home mom. Our businesses are based on having social events, so we were booked and busy. Then, Covid came and we went from booked and busy to having no business.

Everyone always told me, “You need to put Cami on social media.” But that wasn’t my thing; I only had a private Facebook account. But I take decent pictures of her, so I put her on Instagram. My cousin said, “No, TikTok is where it’s at.” I started it last May and would post random videos of her.

I looked to see what people were doing that was similar. They were doing hair tutorial videos. I said, “Oh, wait a minute, I can do that. Oh, they’re making compilation videos of their child being cute? I can do that.” And I started creating.

Absolutely not. She has no clue. [laughs] To her, we’re playing. One thing that we do well is that if she’s not in the mood, we stop. Some of the videos I make for YouTube are just things she and her dad are doing around the house. She doesn’t even know that the cameras are there.

Q. What’s in the pipeline for your businesses or work for Cami?

CamiFroBabe is now incorporated; she is a business. We’ve been very fortunate, so she has a manager. We’ve been getting more brand deals, which is very exciting. We just did one recently with Nickelodeon, and she had no clue I was basically filming a commercial. She was playing. [laughs]

Something that we really want to do is focus on YouTube because when Cami was little, I couldn’t find Black girls she could learn from. I want other kids who go on there to see more kids who look like them. I want them to learn and for parents to be happy for them to watch it.