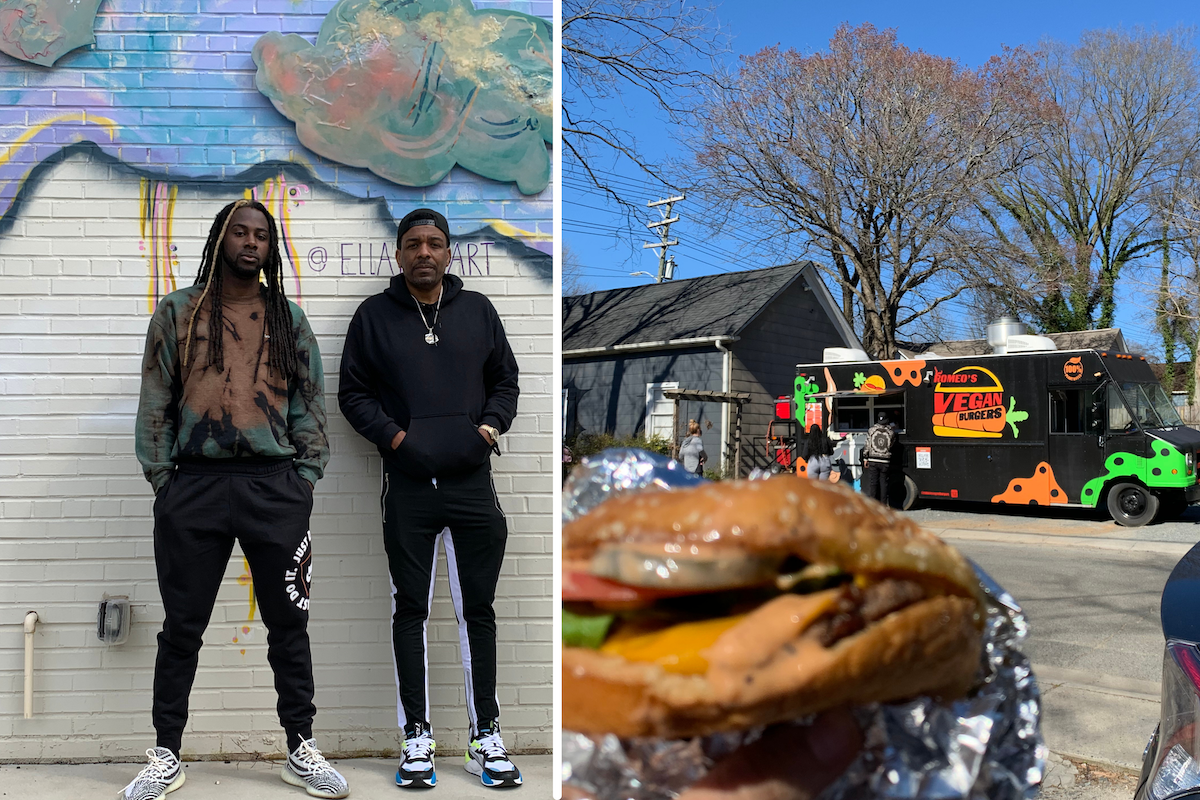 The two have been working together as rapper and manager for many years. While touring the country, they ate at vegan restaurants and played with the idea of opening their own. In 2019, they bought the equipment and started cooking.

Their food truck serves burgers, fries, milkshakes and cookies that are completely vegan. As soon as the truck parks each day, a line forms with both carnivores and vegans of every age, race and gender.

Heath and Tigo B went vegan for the health benefits, but burgers aren’t the food they miss most.

“I don’t really crave meat at this point, but if I had to choose, it would be seafood,” Tigo B says.

Their goal, he says, is to provide vegans with some “comfort food options.” But equally important, they also want to provide an “easy transitional option” for meat eaters who might be looking to make the switch.

Heath’s favorite menu item is the Tobacco Road Burger (pictured below), which comes with coleslaw, chili and onions. Tigo B’s is the Romeo Mac Burger, which has lettuce, onions, cheese and house pickles.

“Him and I are definitely not chefs,” Heath says when asked how they came up with their recipes. When the pandemic hit, the two began cooking for family and asking for honest feedback. It took a while to get to the perfected burgers and milkshakes they now offer.

As for the pandemic, Tigo B says, “It probably helped” their business.

They originally had planned to open a brick-and-mortar location, but since Covid shut those down for while, food trucks gave people an opportunity to takeOUTside while being socially distanced.

The pandemic also gave Tigo B and Heath a break from the music industry. Since tours and concerts were cancelled, they had more time to devote to Romeo’s.

“It’s taken over our lives,” Heath says, describing how they work 15-hour days just to satisfy demand. “Before we sold one burger, we had 3,000 followers.”

The duo had planned to hire a public relations person, but Romeo’s just grew organically, something they credit to their music background, which helped them know how to market the truck. They sometimes ask their Instagram followers to suggest places where they can park and serve, and they also are “guided by the hand above,” Tigo B says.

Heath is from Greensboro, and Tigo B is from Raleigh. They chose to launch the truck in Charlotte because of its foodie culture and progressive nature. They noted that veganism is still a relatively new concept, and if you put it in the wrong atmosphere, it may not flourish.

As for the name, it started when they chose a rabbit to be their mascot. Then they just needed an R-name that would “hit the ear right, and Romeo sounds like a fly rabbit who gets vegan chicks,” Tigo B joked.

“We can’t allow customers to lose faith if we want to manifest this vegan McDonald’s thing,” Tigo B says as he discussed how much of their time and energy goes into this business.

Although running the truck is their current priority, Heath notes that Tigo B is an artist signed to a major label, so “in a short time we will have to get back to the music,” he says.

Loyal fans of Romeo’s need not fear; the food truck will remain thriving in Charlotte. They are currently hiring so their employees can take care of the day to day.

When asked what they want people to know them for, Tigo B says: “These boys ain’t letting nothing stop them from doing whatever they want to do.”

Romeo’s changes locations daily, but it’s likely that they always are within an easy drive to one of Mecklenburg County’s many parks and green spaces. Next time you visit them, check out Charlotte’s Got a Lot for a list of the best outdoor picnic spaces. Mecklenburg Park and Recreation also offers a wealth of outdoor options.