Lauren Woods, 28, was among 32 Black photographers chosen by Apple to shoot scenes in the towns where they grew up. 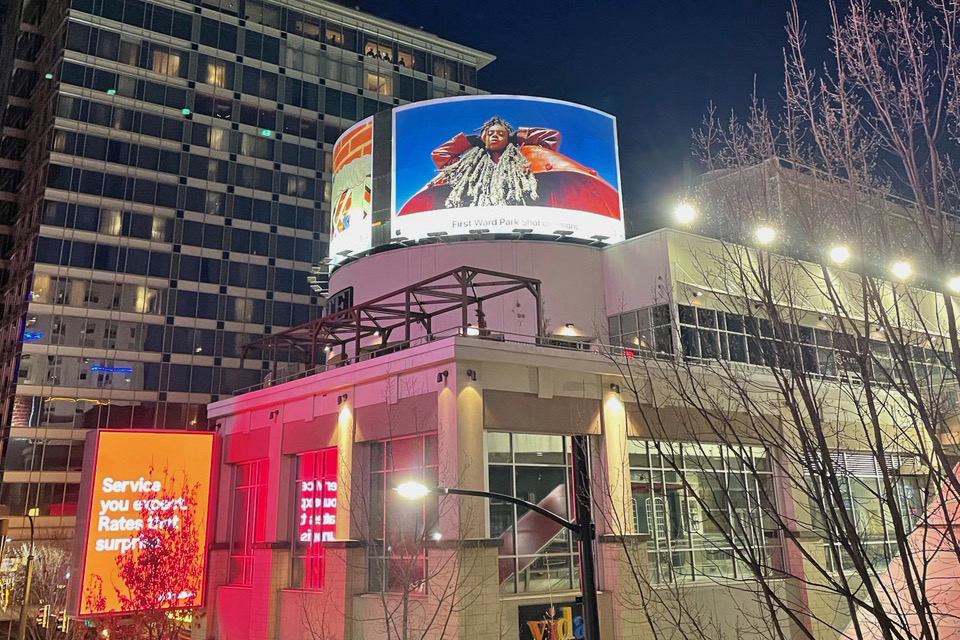 If you’ve recently been near the Charlotte Transportation Center or the nearby Epicentre, you may have seen a series of billboards promoting the photographic prowess of Apple’s iPhone. What you probably didn’t know is that the artist who created those images is a Charlotte-based photographer.

Lauren Woods, 28, shot the photos using local models and an iPhone 12 Pro camera in some of the city’s uptown parks. The images are part of a growing body of work for Woods, who graduated from Davidson Day School and Hampton University.

Lately, some major brands, including Apple, have taken notice of their work.

While on assignment for a West Coast client last week, Woods talked with QCity Metro about the work they love and the career in photography that began almost by accident.

Q. How did you get started in photography?

I started photography toward the end of 2016. My dad was cleaning out the attic, and he had some old film cameras. I was curious about them to see if they worked and were still functional. And from there, I learned on YouTube and started photographing my friends and going from there. At first, I didn’t think much of it; it was just a hobby and something that was fun to me. It still is, even though there’s business added to it. Later on, in 2017, when I was living in Hawaii, that’s when things started getting more serious. I had an opportunity with Girlgaze, a nonprofit organization that works with female and non-binary creators. They wanted me to be a part of one of their art shows in Los Angeles. In that show, there were a lot of celebrities, so that’s how my work progressed. People saw more of the art that I did and gave me more opportunities.

There are a lot of things, but for me, it’s definitely the experiences that I share with the subjects and the companies that I work with. If I did anything else, I wouldn’t have the type of opportunities and experiences that I have now, all the different diversity and range of people that I’ve met. Doing this experience and being an artist, I’ve gotten to work with some of my favorite actors from Marvel. I’ve done brands shoots for Adidas, Warby Parker, Apple. I’ve just met so many super-interesting, incredible people who have helped put things in my life into perspective.

Q. Who are the photographers you most admire?

Definitely on my list from the beginning is a dear friend of mine named Jordyn Belli. And there is a trans photographer from Chicago whose work I’ve really admired — the body language of the subjects and their range of motion and celebrating various identities within the queer and trans community. The other person that I really looked up to a lot, their name is Daria Ritch. And there is an Asian fashion photographer based in Los Angeles. That’s another field that I’d eventually want to explore — the fashion industry and working with different campaigns. They do a lot of really great work with that.

Q. What do you try to do with your photography?

I always want to make sure that I have very vulnerable, honest depictions of people as they are, that people can feel seen and celebrated within my work, no matter who you are. Being able to tell other stories is something that I’ve really valued during this time. I always try to honor the experiences of others, just uplifting their identities. I love to capture very vulnerable moments of intimacy, those very nice, warm, nostalgic moments that show a celebration of happier moments and times.

Q. How did you land the Apple assignment?

Back in November last year, I had a photo editor from Apple reach out to me. They had seen my work through social media. Some people who were talking about me and sharing my work with them. And they had reached out to me because they were preparing for a campaign that was launching this year in February for Black History Month. The series was called “Hometown,” and it showcased 32 black photographers over the United States within their respective cities, sharing and storytelling the black experience through the new iPhone 12 Pro. And with that campaign, we were given the iPhone 12 Pro product to test the new camera lens features that were on that phone and the quality of it. It’s very, very nice. I eventually upgraded right after I did that shoot.

Q. You upgraded? So Apple didn’t let you keep the phone?

No, they didn’t give it to you. We had to give it back. (laughs)

Q. What advice would you give to someone just starting out?

That’s a good question that I’ve been sitting with for a while. It’s been really hard to think about. You know, as corny as it sounds, if it’s something that you genuinely love, and that you put your heart into, the things that you want will come into fruition. Just keep pursuing your craft and honoring and respecting your value and putting yourself out there, networking and making connections within your community and various places. You’ll find that what’s meant for you is meant for you. Just keep going.