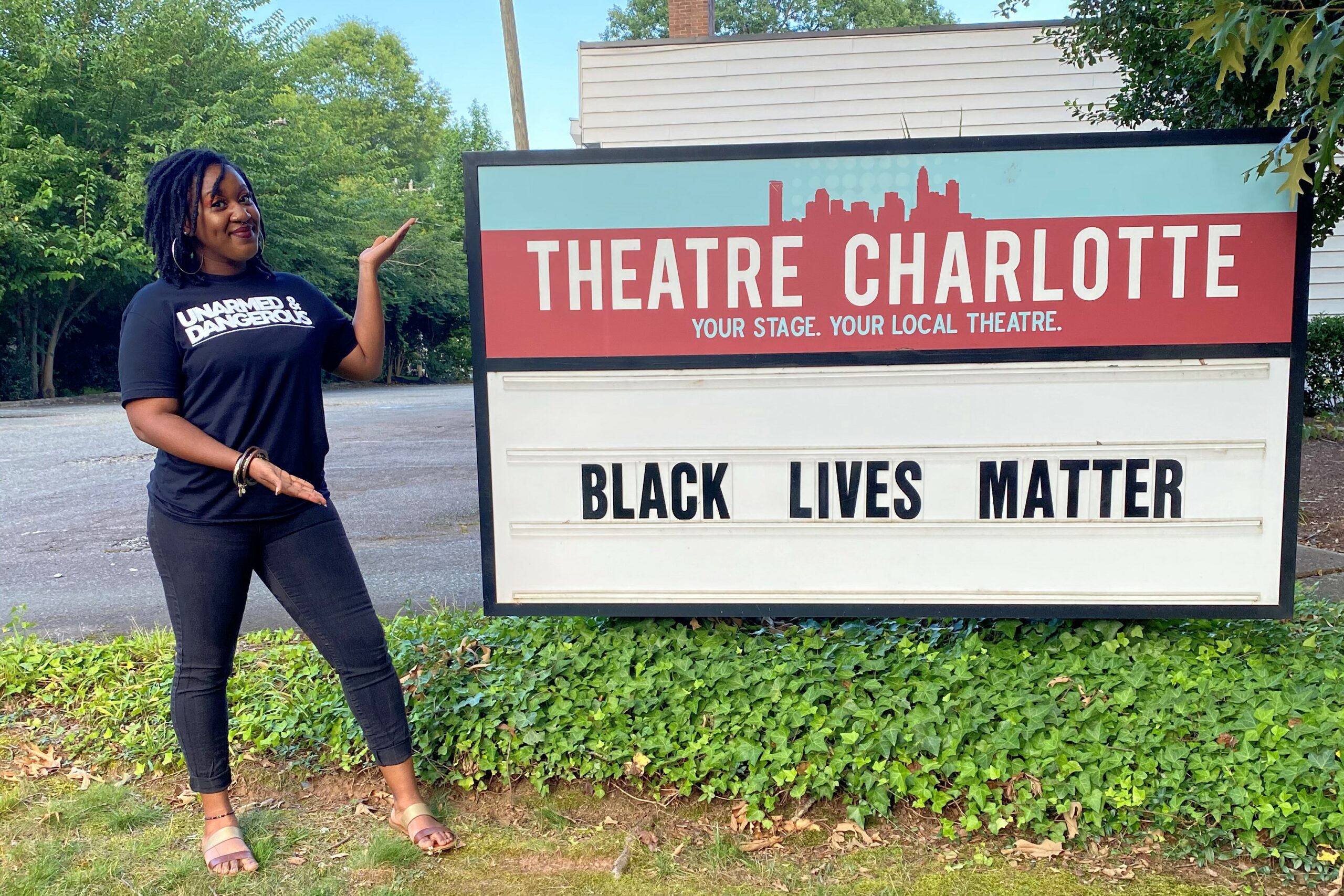 Breana Venable once served as concessions and bar manager at Theatre Charlotte. Now, her play, 'Unarmed & Dangerous,' is gracing its stage. Photo courtesy of Breana Venable

Playwright Breana Venable creates works to remind audiences of real events and the effects they have on the Black community. Her script, “Unarmed & Dangerous,” is launching Theatre Charlotte’s “This is Charlotte” virtual series this weekend.

The story was written in memory of Jonathan Ferrell, an unarmed Black man killed in 2013 by a Charlotte-Mecklenburg police officer following a car accident. The Bradfield Farms neighborhood where Ferrell died was less than a mile from where Venable grew up in northeast Charlotte.

Venable wrote the script in 2015 as part of her graduate work at Hollins University. The assignment was to write a play based on a current event that happened in her hometown. That summer coincided with the trial for Randall Kerrick, the officer who shot and killed Ferrell. (Kerrick’s trial ended with a hung jury, and prosecutors decided not to retry the case.)

To prepare for the project, Venable rewatched ‘Fruitvale Station,’ Ryan Coogler’s 2013 directorial debut that recounted the final hours of Oscar Grant, a Black man killed in Oakland, California, in 2009 by a transit police officer.

“What’s so important about that particular story is that they tell Oscar Grant’s full story, where we got to know Oscar Grant,” Venable said.

She wanted to do the same for her script based on Ferrell, but the six-week time constraint wasn’t enough time to do it justice. She changed the angle to focus on how the death of an unarmed Black man killed by a White officer impacted the community and the loved ones left behind.

Her central character, a 15-year-old boy named Elliott Parks, lives a few houses down from where the story’s incident happens. Throughout the play, Venable parallels his “cries for help,” masked as bad behavior, with Ferrell’s cry for help as he sought aid following his car crash.

Venable based Parks on her younger cousin but also pulled from experiences during her three-year stint as a middle-school theater teacher in Charlotte-Mecklenburg Schools.

“What I found for Black male students was that a lot of times when they act out, it’s not because they’re bad kids. There’s something else going on,” she said. “But because of the perception of young, Black boys, no one really listens to their cry for help.”

Director Ron McClelland will bring Venable’s work to life during Theatre Charlotte’s live-streamed event on March 19 and March 20 at 7 p.m. Tickets are $10. Click here to purchase.

Venable says she wants viewers to walk away understanding the impact police brutality has on the Black community.

How Covid changed her direction

The past year has been a whirlwind for Venable. She returned to Charlotte from New York City last March after the coronavirus pandemic abruptly ended her work.

“When I got back home, I kind of fell into a depression,” said the 31-year-old. “I had no income and wasn’t really sure if I was going to be able to find work again.”

She needed something to do, so she channeled her feelings into a new project. She wrote and produced a web series called “What Y’all Doin?” about six best friends who are scattered throughout the country and dealing with the pandemic. Venable says the series will be released on YouTube and Instagram later this month.

The web series was her attempt to transition from theater into film. She also pursued opportunities as a script supervisor, where she’d record notes to make sure scenes were cohesive. Analyzing scripts had been one of her strong suits during grad school. She had met a working script supervisor during a workshop in New York who groomed her for the role.

Currently, Venable is working on a feature film for her script, “Know Justice Know Peace.” Once again, she tapped into issues related to police brutality. The story follows the sister and best friend of a beloved barber who is unjustly killed by police officers and how the community unites to seek justice. She was awarded a support grant from the Arts & Science Council, which she used to produce a short-film version last month.