‘A family decision’: JCSU professor pushes aside concerns to get vaccinated against Covid-19 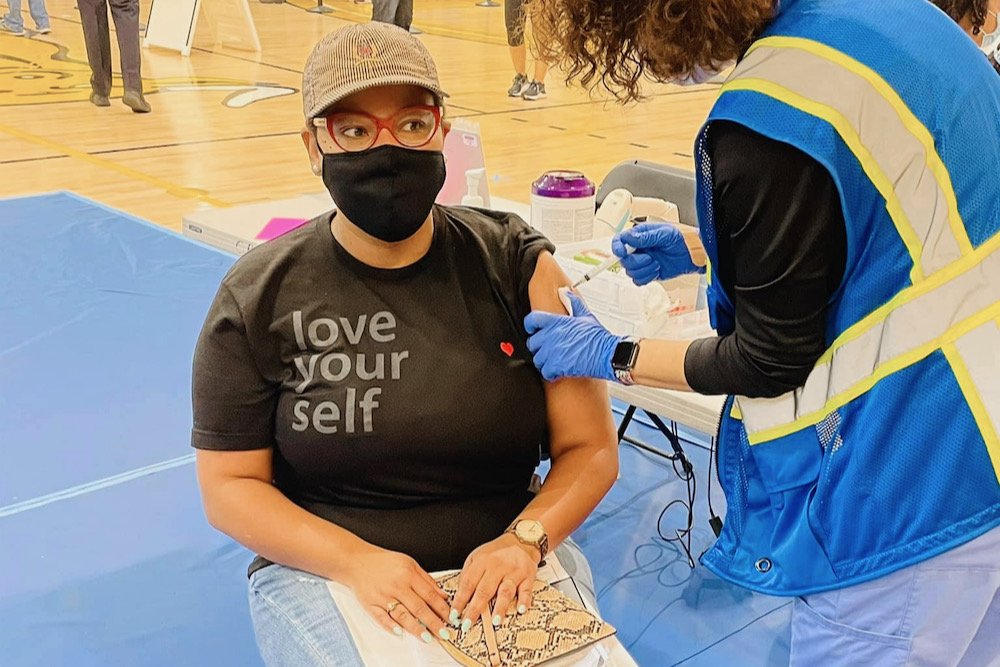 Every adult in Terza Silva Lima-Neves’ immediate family had been vaccinated — her parents, husband and siblings.

She alone had not.

On Saturday, Lima-Neves pushed aside any concerns she had and headed to Johnson C. Smith University, where Atrium Health was administering vaccinations against Covid-19, which has claimed more than 11,700 lives in Mecklenburg County.

Wearing a black t-shirt emblazoned with the words “love your self,” she sat on a folding chair inside the school’s gymnasium and offered her left arm. Within seconds it was over.

“It was the right thing to do to protect myself, my children and the rest of my family,” Lima-Neves told QCity Metro. “It was a family decision that we would be vaccinated to make sure that we wouldn’t die of this horrible virus.”

Why it matters: As health officials attempt to vaccinate a nation of roughly 331 million adults, they’ve encountered what some have dubbed “vaccine hesitancy” — people who, for various reasons, are reluctant to get the shots.

Some are reluctant because they fear possible side effects, which health officials say have been minimal. Others — notably, some in Black communities — have expressed to pollsters a distrust in government and the nation’s healthcare system.

Lima-Neves, who has worked as a political science professor at JCSU for the past 11 years, said she became more comfortable with getting vaccinated after family members got their shots. She also spoke to her physician and researched the available vaccines.

“I come from a family of nosy people who love to do research,” she said.

Lima-Neves, who was born in the Republic of Cabo Verde, an island nation off the coast of west Africa, said she understands why some Black people might be skeptical of the vaccine.

So does Charles Evans, president of the N.C. Association of Black County Officials. During a February press briefing, Evans said the distrust among some Black residents undoubtedly stems from the racial and ethnic injustice in America’s healthcare system.

Still Evans said he trusts the vaccines because they’ve been tested and deemed safe and effective.

“If we are going to gain control of our lives, we need to get vaccinated,” he said.

In mid-January, the Kaiser Family Foundation survey found that 43% of Black respondents indicated they would “wait and see” before getting the shot.

So far in North Carolina, of the 1.186 million people who have been fully vaccinated in the state, 14.6% identified as Black, compared 77.9% who identified as White.

Lima-Neves said she became more receptive to getting the vaccine after her research turned up the fact that Black people — including viral immunologist Dr. Kizzmekia “Kizzy” Corbett, a native of Hurdle Mills, N.C. — helped develop the Moderna vaccine.

“All voices, experiences, ethnicities and races were in the room when these vaccines were being developed,” Lima-Neves said. “This makes me feel a lot better, and more confident, about taking the vaccine.”

Also, Lima-Neves said, after two natural child births, she wasn’t scared of a little needle prick, or the slight arm tenderness that some vaccine recipients have experienced after a Covid-19 shot.

Because of the pandemic, Lima-Neves has not seen her parents, who live in Rhode Island, in nearly a year — the longest period she has gone without seeing them, she said. But now that she and both parents are vaccinated, she’s making plans to visit, and she hopes to make it a “a family affair” that will include her siblings.

JCSU hosted the mass vaccination event on Saturday and Sunday for healthcare workers in Group 1, people over the age of 65 in Group 2 and essential workers in Group 3. A JCSU official said at least 6,200 people got vaccinated.

Latrelle McAllister, the university’s vice president of administrative services, said the school thought it “critical” that people of color be vaccinated.

“We’ve seen in the news that there’s a big gap between people of color and other races and ethnicities in terms of getting the vaccination,” she said. “So we wanted to be on the front line of educating people, dispelling the myths about the vaccine and making it convenient for individuals who live in the northwest corridor to be able to get this vaccination.”

Novant Health infectious disease expert Dr. David Priest told reporters in February that transportation and lack of access to healthcare resources also may contribute to Black people being vaccinated at lower rates. To address those concerns, both Novant and Atrium have been holding vaccination events in Black communities around Charlotte, assisted by a network of Black churches.

Lima-Neves said getting vaccinated at JCSU was “absolutely fantastic,” because it’s a place and community she’s very familiar with. Over the last several weeks, she said, she has seen long lines at Bank of America Stadium and at other mass vaccination events, which made he JCSU event more convenient.

Also, when choosing which vaccine she would receive at the event, Lima-Neves said she chose the Johnson & Johnson shot because it requires only one dose.