Only 2.5% of all vaccines administered in the state have been delivered to recipients who identify as Hispanic, state data show. 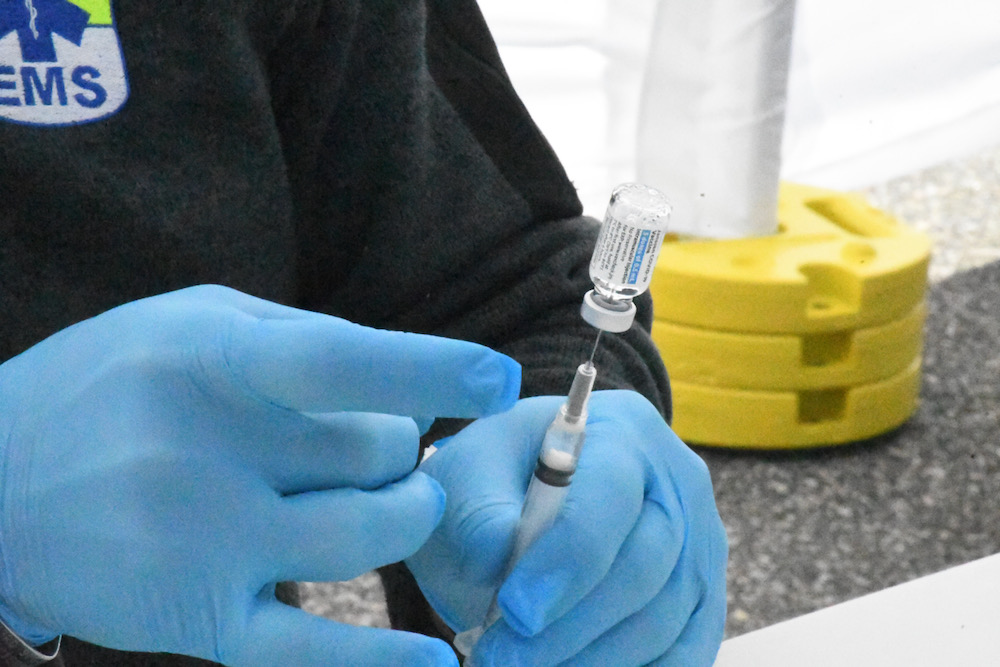 As more and more North Carolinians receive the COVID-19 vaccines, one population in particular has lagged behind the rest. Less than 4% of the Hispanic community in North Carolina has received a first dose of the potentially lifesaving vaccines.

Despite making up about 10% of North Carolina’s population, only around 2.5% of all vaccines administered have been delivered to recipients who identify as Hispanic, according to the N.C. Department of Health and Human Services COVID-19 dashboard.

The numbers are low for a variety of reasons, according to leaders in Hispanic communities.

One issue may be eligibility. The Hispanic population in the state is very young, meaning not as many people qualified under the earliest prioritization groups, which included individuals age 65 or older.

In 2012, the median age of North Carolina’s Hispanic population was estimated to be 24.7 years old, and fewer than 75,000 were above age 50, according to a Carolina Demography report from 2014.

“We do have a fairly young population in North Carolina, which explains some of the numbers we’re seeing,” said Eliazar Posada, acting president and executive director of El Centro Hispano, a community nonprofit organization based in the Triangle.

“But that doesn’t mean that we don’t have people eligible. There are thousands of Latino community members currently eligible, and they are also facing barriers,” Posada said.

Barriers for some communities

Lack of access is another major barrier for Latinx communities, according to Posada.

In some cases, the lack of access is physical, such as a lack of physical vaccination locations in historically Hispanic communities or difficulty reaching more rural areas, like Duplin, Samson and Lee counties, where Hispanic residents make up at least one-fifth of each county’s population. In other cases, Posada explained, “access” refers not just to the vaccine itself, but to information and resources.

For example, many public health departments and vaccine administrators have set up online registration forms to reserve a spot for a vaccination, precluding those without internet access from scheduling an appointment.

“A lot of people, especially older people, in our communities don’t have access to the internet or they may not be able to understand or navigate a webpage to register themselves,” said Juvencio Rocha-Peralta, the executive director for the Association of Mexicans in North Carolina, or AMEXCAN, which primarily serves Latinx communities in Eastern North Carolina.

Even if an individual has access to the website, language may be a barrier, as those local sites are often in English.

Many health departments also list a phone number, but Rocha-Peralta said that there are not enough bilingual staff employed, leaving Spanish speakers unable to communicate and register for a vaccination.

Even something as simple as data entry can become a barrier when forms are not designed to account for people with names that do not fit the typical “first name, last name” model, such as people with multiple or hyphenated last names.

“The system that was set up was not designed for our communities,” Rocha-Peralta said.

Another major barrier to vaccinating Hispanic communities, according to Posada, is building trust.

Unlike other communities that tend to display higher levels of vaccine hesitancy, Posada said he does not see a large amount of distrust in the vaccines themselves. Instead, he sees distrust in the institutions delivering the vaccines such as hospitals and, in particular, the federal government after the Trump administration.

“Unlike other communities, a lot of Latinos and Hispanics in North Carolina, they weren’t here a few generations ago … so they don’t have that same history as other (marginalized communities),” Posada said.

“But after the last administration devastated a lot of our communities … we have a lot of folks who don’t trust the institution delivering that vaccine but do trust the science behind it.”

In particular, North Carolina is home to an estimated 200,000 or more undocumented immigrants who may distrust institutions because they fear they will be asked to present identification documents.

As a result, over the course of the pandemic, undocumented immigrants have feared seeking COVID testing or care due to concerns about immigration status and possible deportation.

When he did not see public health officials reaching out to these communities, Rocha-Peralta and his staff decided to take it upon themselves by turning to local Spanish radio stations and television news channels to inform communities about the importance of vaccination and about upcoming clinics.

After appearing on these shows, Rocha-Peralta said he was inundated with calls from Spanish speakers who wanted the vaccine but didn’t know when, where or how they could get it.

“A lot of (the messaging) you hear, it’s coming from a national level or state level. We’re talking about very local news in Spanish,” Rocha-Peralta said.

“We have a lot of Latino organizations in North Carolina, but for some reason there’s a gap between those sources and public health. … In these communities, it matters how these messages are delivered.”

DHHS also translated COVID-19 resources and information, including social media graphics, radio ads and video public service announcements, into Spanish and made them publicly available for download on its website.

The efforts are not enough for advocates like Posada.

“The clear answer is the state of North Carolina has not done enough to prioritize people who don’t speak English. That’s it. I mean that’s the reality of the situation,” he said.

To date, DHHS has not yet translated the vaccine management system, CVMS, into Spanish nearly three months after the first vaccine doses were available in North Carolina.

Adding a Spanish translation was a decision in balancing speed and equity, Benjamin Money, deputy secretary for health services, said.

Since North Carolina opted to develop its own vaccine management system rather than use one provided by the federal government, “our first focus was on building a system from scratch to the point that our providers could use it effectively,” Money said.

The department is developing CVMS to act as a more public-facing system in an attempt to reduce the burden on providers who currently input all the information at the time of vaccination.

The cumbersome paperwork led to backups at vaccine clinics. The agency expects to release a Spanish translation of CVMS materials for providers this week, Yazmin Garcia Rico, director of LatinX and Hispanic policy and strategy at DHHS, said.

DHHS hired Garcia Rico for the new role in January.

“This position was developed out of a clear identification that DHHS needed to have a much deeper engagement with our growing Spanish-speaking and Latinx communities,” Money said.

“This pandemic exposed that we needed a better response to be able to engage with our growing Latinx population in ways we had not before.”

Improved services for Spanish speakers are critical for equitable access as the state begins to allow front-line essential workers to receive the vaccine.

Some in the Spanish-speaking community took on the responsibility of facilitating vaccinations when they saw failures by government entities.

Dr. Rosa Gonzalez-Guarda, associate professor at Duke University’s School of Nursing, said she originally became a nurse to address issues of inequity in the health system, but she then decided to become a researcher to study the root causes of those inequities.

Now, she is putting her clinical skills to use once again as a vaccinator at clinics around Durham.

“Because there’s such little access to bilingual, bicultural providers, I’ve been stepping up every opportunity that I have to be part of these vaccination events as a vaccinator,” Gonzalez-Guarda said.

For her, it is important to have both the bilingual and bicultural component so that she can not only provide information to Spanish speakers, but she can also provide a sense of comfort and community.

“There was this lady who came in on Saturday and, you know, everyone getting a vaccine is a little nervous,” Gonzalez-Guarda said.

“I saw her pull out a little prayer card, and it was just like my grandmother. I connected with that immediately … so I took a moment to pray with her.

“That moment validated everything about the importance of having someone that is bilingual/bicultural. For every person, we’re influencing that network of their peers. And I think I connected with that woman and showed her affection and made her experience that much better.”

The cultural elements are as important to some advocates as the language elements.

“I’ve been having conversations (with DHHS) about language and cultural competency for some time,” Posada said.

“Are they working on it? Yes. Are they doing better than when first COVID started? Yes. But I want to see more done.”

Local nonprofits have also partnered with local health departments to secure vaccines and run their own community-focused clinics to help with more equitable vaccine distribution.

El Centro Hispano hosted vaccine clinics throughout February, Posada said. Those initial clinics, he said, were relatively small, but they were important for developing a system that could be scaled up to prepare for much larger numbers of Group 3 essential workers who became eligible this week.

As more counties move to eligibility criteria related to employment, such as front-line essential workers, there is an opportunity to offer vaccination to more members of the Latinx workforce.

“Now that we are vaccinating employees … I think now it’s going to be critical for us to work with employers,” Gonzalez-Guarda said. “Construction workers, housekeeping companies, farmworkers. … I’ve learned from colleagues that there’s a really broad range of trust between employers and workers, so it isn’t perfect — but it’s an interesting potential model.”

DHHS is exploring employer-partnership models to encourage and facilitate vaccinations, including partnering with meat processing plants, which employ large numbers of Latinx workers and were at the center of several large outbreaks early in the pandemic, Money said.

The agency recently released a survey to find community partners that want to host vaccination clinics in their communities, Garcia Rico said.

Advocates and health professionals are also hopeful that current developments will lead to more long-term solutions.

“It’s clear that we’ve been developing processes and systems with kind of a general population in mind, and then we’re having to work to make that system fit for other populations that may not have the same kind of access or perspective,” Gonzalez-Guarda said.

“In the future, it’s important that we design different types of strategies for the different populations we’re trying to engage. For some, electronic social media platforms will get the word out. But for other communities, having people on the ground, people in neighborhoods that are talking and engaging will be critical.”