Inside the Hope Tank, the mobile shower and laundry center aimed at neighbors in need

Emmanuel and Adrienne Threatt launched the mobile hygiene service during the pandemic as the number of homeless residents increased. 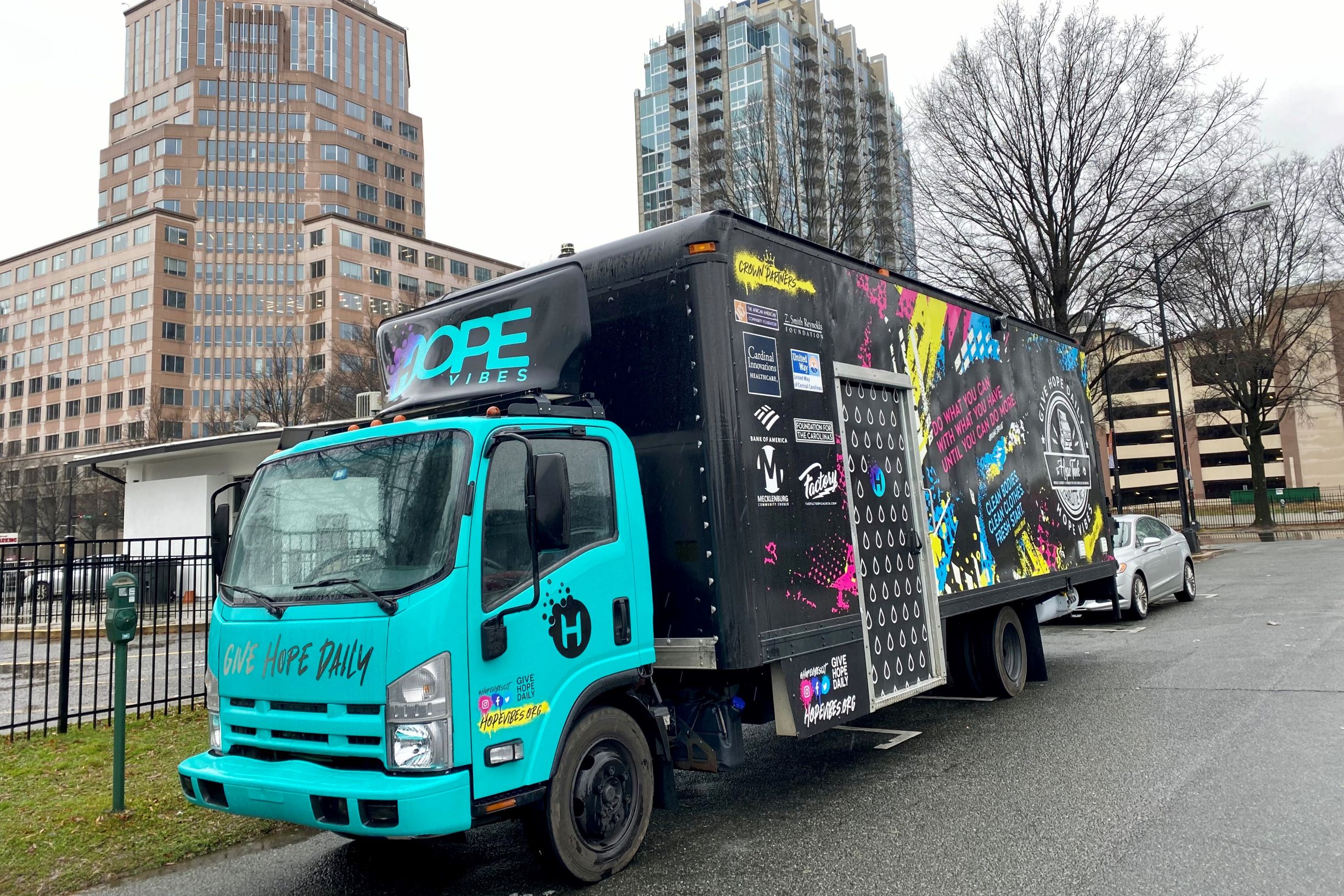 “A homeless woman was sharing about dealing with her menstrual cycle while living on the streets,” Threatt said. “And she would have to often decide whether she was going to use her limited resources to buy food that week or feminine hygiene products.”

Threatt was moved. She shared the video with friends and her husband, Emmanuel. Soon, she was moved to action with the help of Emmanuel and volunteers. They passed out feminine hygiene products to homeless women in Charlotte.

Adrienne and Emmanuel Threatt started Hope Vibes in 2017. In November, they rolled out “the Hope Tank,” a mobile hygiene service vehicle.

“The idea was really to be able to provide that hygiene need at the next level,” Emmanuel Threatt said. “So, laundry showers, restrooms with sinks, and toilets and mirrors so that a person can really feel like they’re at home and bring that home aspect just out in the streets.”

The Hope Tank houses two full-sized bathrooms and three sets of washers and dryers outfitted in a box truck. Between the bathrooms and the laundry area are two 400-gallon freshwater tanks and one wastewater tank. The setup requires two generators to operate, plus propane to heat the water and the dryers.

“The bathrooms themselves are a mixture between a home bathroom and an RV, so there’s elements of an RV in the Hope Tank — but then parts of it feels like home,” Emmanuel said.

The Hope Tank goes out into the community every second Saturday of the month, with occasional pop-up days in between. Until it was ordered to be cleared by county health officials, the encampment known as Tent City was a regular stop.

When it still stood, a resident there named Chris arrived with a small plastic bag of clothes in one hand. It was cold and raining hard. He got a cup of coffee. During a brief interview, he called the Hope Tank “enlightening” and “positive” before heading to a washing machine where a volunteer helped him.

The volunteers are familiar with Chris. He regularly comes to wash clothes and take a shower. Chris said he’s been homeless for over a year.

Adrienne Threatt said the pandemic has made it harder for people who are homeless because places they would typically go to freshen up have been unavailable.

“There were a lot more people that were on the streets that just didn’t have the typical access they would usually have inside of restaurants uptown and things like that,” she said.

Hope Vibes received a $50,000 grant from United Way to help people during the pandemic. Adrienne Threatt said the organization also has sponsors and gets donations. People give items like hygiene products, blankets and socks that are passed out when Hope Tank makes a stop.

“The way that people have this sense of renewal once they’ve had an opportunity to take a shower after not having had one for weeks or months,” Adrienne Threatt said. “Being able to wash their clothes so that they can go to a job interview and not be insecure because they have stains on their clothes or smell a certain way. Like, to me, that’s huge. And I’m thankful that I get a chance to be a part of doing the work that we do.”

She said the pandemic has limited the number of volunteers, but about 20 still show up at Hope Tank events. Volunteer Rebekah Peterson said she can relate to many of the people they serve.

In the future, Hope Vibes hopes to get another truck. They’re also preparing to launch the “Solar Sinks Project,” which aims to place touchless, solar-powered hand washing stations throughout the city — another way the couple plans to “give hope daily.”