Update: No Grease will remain at SouthPark Mall

Damian and Jermaine Johnson reach agreement to stay in SouthPark location for the remainder of their temporary lease. 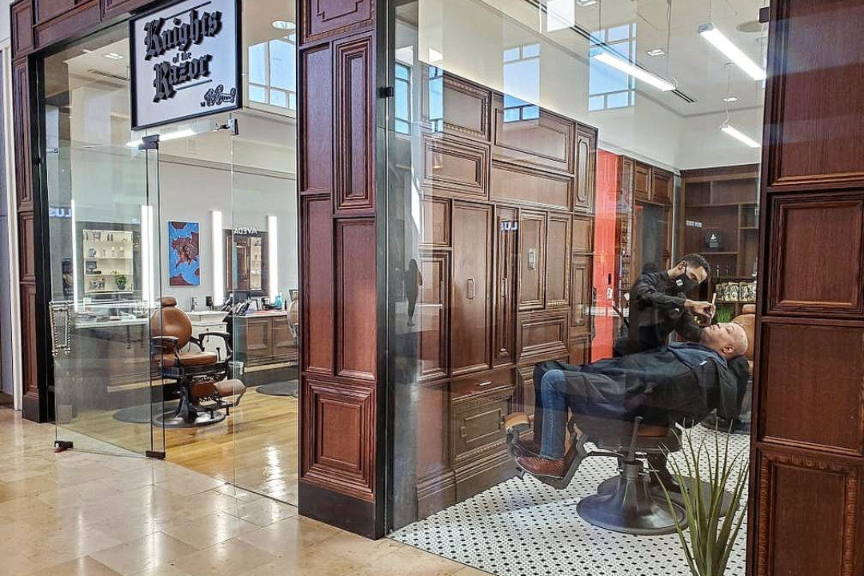 The owners of No Grease! barbershops opened Knights of the Razor at SouthPark Mall in January 2021. Photo courtesy of Damian Johnson

Update (8 p.m.): The owners of No Grease barbershop and Simon Property Group have come to an agreement regarding the temporary tenant lease of Knights of the Razor at SouthPark Mall.

In a statement Wednesday evening, a spokesperson for Simon said the Johnson brothers will remain at the upscale mall for the duration of their temporary lease.

“We have delayed our other deal until next year and will be discussing with Mr. Damian Johnson and Mr. Jermaine Johnson the possibility of a permanent location for their barbershop beyond their current temporary lease term,” the statement read.

The community rallied around Damian and Jermaine Johnson after news spread that they’d have to vacate their Knights of the Razor barbershop in SouthPark Mall.

According to Damian, mall management notified them last week that their year-long lease agreement was being terminated at the end of March. I spoke to the brothers in January, two days after they debuted their latest shop under the No Grease brand.

Although their temporary lease included an option for SouthPark Mall to terminate the lease before year’s end, Damian said they thought there was a shot for getting a permanent lease considering how well they were doing after 45 days of business.

“That shop was well on its way to being one of our top shops from a profit standpoint,” he told me on a call last week. “They had found a permanent tenant there, but they never even offered a permanent opportunity for us.”

In a statement Tuesday evening, a spokesperson for Simon Property Group, which owns SouthPark Mall, said they reached out to the brothers and “are currently in conversations to resolve the situation in a fair and equitable manner.”

No Grease has several locations on Simon properties, including two at Concord Mills and another in Sugarloaf Mills in Georgia. The property group says it’s open to adding more locations in the future “based on their [Damian and Jermaine’s] interest.”

Damian says the ordeal is a “teachable moment for anybody who’s in business.”

He says they’ll likely rebrand their location near the Spectrum Center in uptown Charlotte to transition into Knights of the Razor.