The Great 28: Black Charlotteans who are shaping Charlotte

Our inaugural list of Charlotte residents who have used their power, platforms and influence to make our city a better place. 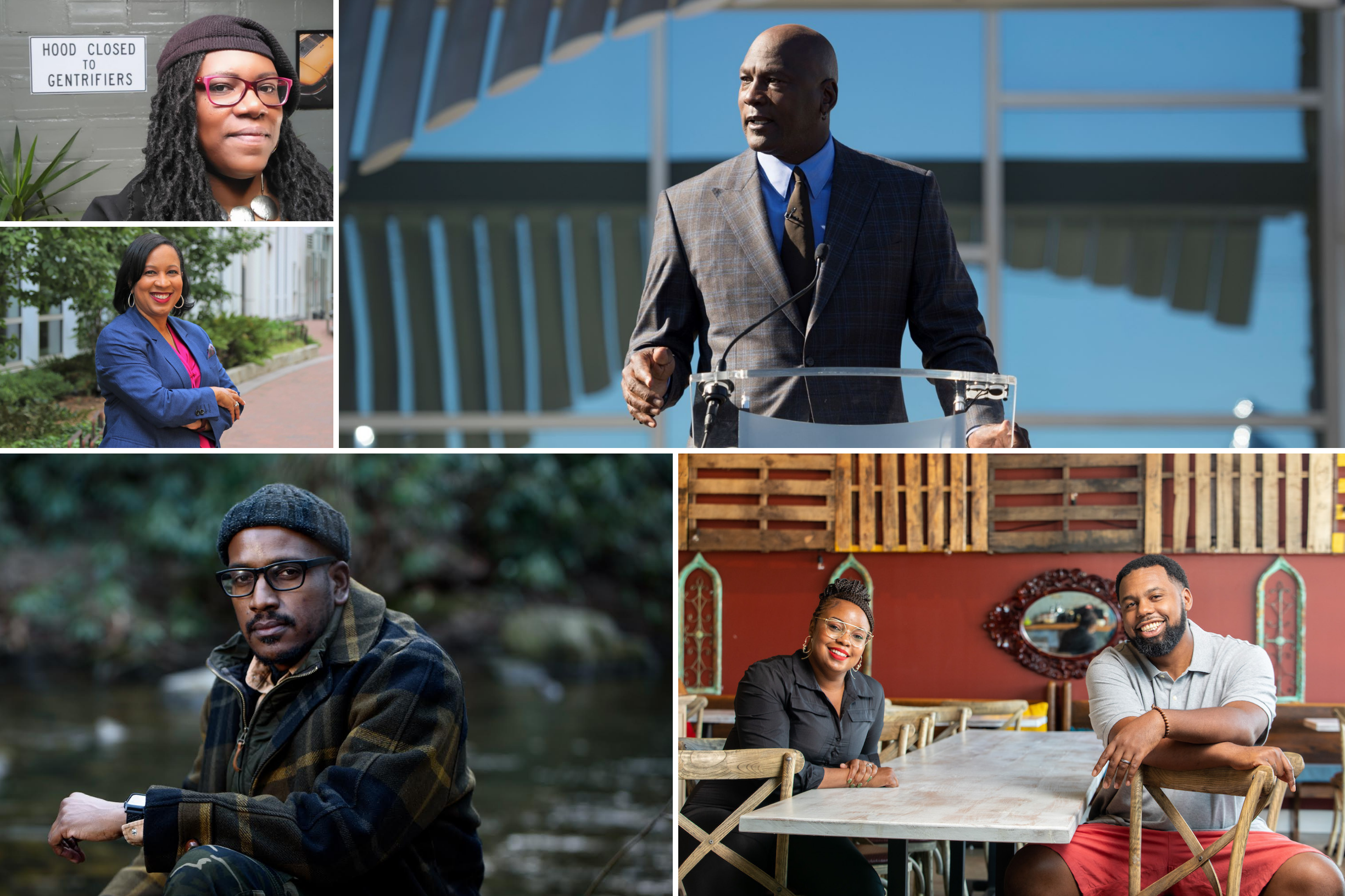 A community foundation helping people, companies and nonprofits make a positive impact through the power of philanthropy. Learn more.

This Black History Month, QCity Metro is celebrating Black excellence by acknowledging Charlotte residents who have used their power, platforms and influence to make our city a better place.

In our first edition of The Great 28, we pay homage to local entrepreneurs, educators, activists, nonprofit executives, government employees and even a high school student.

We acknowledge others equally deserving of this list, which was compiled by staff and reader recommendations. Our sponsor, Foundation For The Carolinas, played no role in the selection process.

J’Tanya Adams is a bridge builder. No official title does justice to the quiet work she does in support of Historic West End and its cultural and economic development. Her invisible hand has left its mark on some of the most exciting projects happening along the Beatties Ford Road corridor.

Charis Blackmon is addressing housing affordability and homeownership in Charlotte’s rapidly gentrifying west side. Her work alongside west Charlotte neighbors is using the innovative solution of a community land trust model to create permanently affordable housing for low- and moderate-income residents.

Educators shape the future through the young lives they touch. During his 27 years as a Charlotte Mecklenburg Schools principal and administrators, Curtis Carroll has championed the academic potential of students in Charlotte’s Black and Brown neighborhoods. He retired in 2020 as principal of Vance High School.

Chef Greg and Subrina Collier are part of a new wave of restaurateurs bringing national acclaim to the Queen City — whether it’s through chef’s prestigious James Beard nominations, their ranking as one of the country’s best restaurants or them creating opportunities for Black workers in the hospitality industry.

Carrie Cook is one of Charlotte’s most prominent social entrepreneurs. Her work with the GreenLight Fund’s local office is focused on helping Charlotte families move out of poverty by dedicating more than $3.5 million to tackle social and economic issues. Her nonprofit, EmpowHERment, embraces and empowers teenage girls in our community by providing them with much-needed mentors.

Shaun Corbett was in the national spotlight after inking a deal to make his Lucky Spot Barbershop the first Black-owned barbershop ever located inside a Walmart store. Before that, his philanthropic efforts were helping bridge the gap between local law enforcement and the Black community through barbering apprenticeships and mentoring.

Cathay Dawkins has built one of the city’s most engaged, grassroots efforts in support of Black entrepreneurs. One of his largest initiatives, Charlotte Black Restaurant Week, has generated more than $1.7 million in economic impact since its inception in 2017.

While demanding greater police accountability, Robert Dawkins has worked with law enforcement to reimagine community policing. He’s part of the Charlotte City Council’s Safe Communities’ community input group, which has presented recommendations resulting in changes to the Citizens Review Board, policy changes regarding officers use of deadly force and more.

As economic development comes to Beatties Ford Road’s business district, Christopher Dennis has led the way. He is developing two commercial projects there. Less known are his efforts to renovate homes and provide affordable units in a nearby neighborhood.

Michael DeVaul had been a leader at the YMCA of Greater Charlotte before joining the national organization in January. He is a founding member of My Brother’s Keeper Charlotte Mecklenburg and currently serves as its chief strategy officer. He received the Champion of Change Award from the Obama White House.

Mongai Fankam, a high school senior, is making waves globally. No BackPack Day is a day when American youth are asked to go to school without their backpacks, carrying all their books and supplies in their hands or in plastic bags to raise awareness of the millions of students around the world who walk miles to school without a backpack because they cannot afford one.

Tiffany Fant is a cultural and climate justice activist, a community organizer who wears the banner of being a native Charlottean proudly. She is the architect of Sol Nation, which encourages vulnerable communities — particularly Black communities — to own their own solutions.

Rodney Faulkner knows a sweet deal when he sees one. His firm recently brokered a multimillion-dollar deal for the redevelopment of the iconic McDonald’s Cafeteria at the intersection of Beatties Ford Road and LaSalle Street. His success in Charlotte’s commercial real estate space focuses on projects that create jobs and opportunities for local residents.

Alvin Jacobs is a photo-documentarian who honed his craft on the front lines of social justice movements. His storytelling from behind the lens through exhibits like “K(no)w Justice, K(no)w Peace” and “Welcome to Brookhill,” continues to capture the resiliency of Charlotte’s most marginalized communities in the face of injustice.

As the city of Charlotte’s planning director, Taiwo Jaiyeoba is literally shaping our city’s future. He is part of a team overseeing Charlotte’s 2040 Comprehensive Plan – the city’s first comprehensive plan since 1975 –  which is framing what the city’s neighborhoods look like, where infrastructure investments are made, how people get around and where developers can build.

Michael Jordan gave $7 million to Novant Health, which led to the opening of two Michael Jordan Family Health Clinics crucial to fighting Covid-19 and other public health issues. Last summer, he and the famed Jordan Brand pledged $100 million to multiple organizations over the next decade to help Black communities.

Christopher Moxley is a branding boss. He is the co-owner of 704Shop, known as Charlotte’s original lifestyle and apparel brand. An innovative licensing agreement with the city of Charlotte allows the brand to legally sell its Crown Collection using the city’s official crown logo.

In the male-dominated field of real estate development, Dionne Nelson is the founder of Laurel Street. The development company is tackling Charlotte’s affordable housing shortage with a focus on working families and seniors.

Kass Ottley organized and led many of Charlotte’s Black Lives Matter marches and protests last summer. She talks directly to the CMPD on a regular basis to address her issues with any policies or practices. Her nonprofit, Seeking Justice Charlotte, fights for systemic change for Charlotte’s marginalized communities.

At least 18 “revenue positive” businesses have been created in Charlotte because of Henry Rock and the nonprofit he launched in 2014. He says more Black entrepreneurship is needed to close the wealth gap in America. He now has turned his focus to include workforce training for citizens returning from incarceration.

More than 3,200 young “warriors” have been nurtured in Black male leadership by the nonprofit Reggie Singleton founded in 1999. The young men have traveled to east Africa and Cuba to enhance their understanding of world history and the African diaspora. Their annual community garden teaches food independence and provides fresh produce to community elders.

Former Carolina Panther Steve Smith Sr. and his wife, Angie, founded the Steve Smith Family Foundation, which focuses on awareness and prevention of domestic violence. They pledged more than $350,000 to establish a wellness center that offers free medical and counseling services to low-income, uninsured and underinsured residents. Also, they opened a virtual learning center in uptown Charlotte for CMS K-5 students who fall under the McKinney-Vento Homeless Assistance Act.

As Charlotte program director for the Knight Foundation, Charles Thomas has led the foundation’s strategy to elevate community voices and advance equitable and inclusive development in the West End and North End. Since 2015, Knight has also supported local arts and journalism in Charlotte, and has committed more than $25 million investing in Historic West End Partners, West Side Community Land Trust, Local Initiatives Support Corporation, and initiatives to foster technology and community engagement at the Charlotte Mecklenburg Library, Project LIFT, and in the North End Smart District.

Charlotte is building its reputation as home to tech startups, and Naomi Thomas is part of that new class of young entrepreneurs. Through her educational tech company she is equipping participants with skills to increase diversity in STEM careers.

In the midst of Charlotte’s most painful moments, Rev. Dwayne Walker has opened his church to host community discussions and promote racial healing. Most recently, his church announced plans to develop affordable housing in the city’s urban core.

Affordable housing has long been a problem in Charlotte, and Covid-19 only made things worse. Keeping residents housed through the pandemic has been a priority for Pamela Wideman, who works to keep the city’s affordable housing developments on track. Recently funded projects are expected to add nearly 1,500 affordable units.

Healthcare venture capitalist Shante Williams is steering the ship for the area’s Black chamber of commerce. As Black businesses navigate the pandemic, Williams has worked with city leaders to earmark financial and technical assistance resources.

Deborah Woolard‘s spirit for helping others is fueled by her own experiences with homelessness. Amidst the Covid-19 pandemic, Block Love Charlotte has provided daily meals for houseless neighbors and those in need.

Since 1958, Foundation For The Carolinas has been your community foundation, helping people, companies and nonprofits make a positive impact through the power of philanthropy. In addition, FFTC manages scholarships, grant programs and civic initiatives that create opportunities and address community needs. Learn more at fftc.org.