Mural highlighting Historic West End will be installed as part of city's I-77 and West Trade Street underpass project. 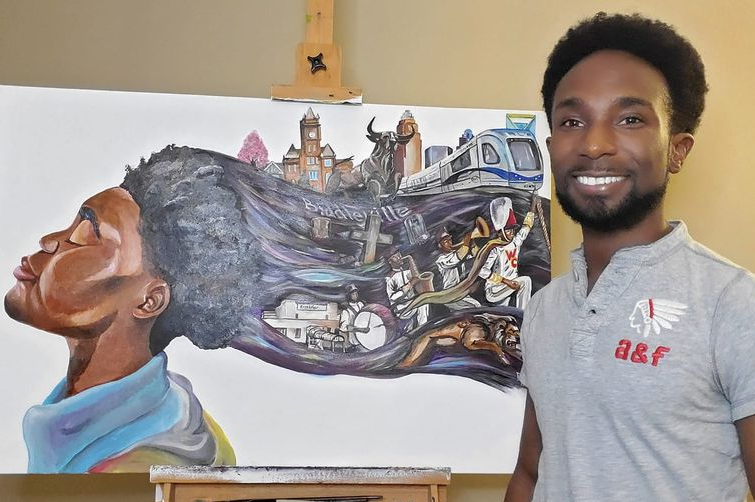 Local artist Jamil Dyair Steele was shocked to learn that his “Heritage of Biddleville” mural design was selected as part of a gateway project into Historic West End.

In December, the city of Charlotte announced its placemaking request for proposals as part of the I-77 and West Trade Street underpass project. The mural is one component and will complement 2012’s “Passing Through Light,” which illuminates the underpass through a sequence of LED lights.

As the winner, Steele will receive $30,000 for his design and installation of the 182-foot mural.

The concept built on one of Steele’s earlier paintings called “Biddleville,” which depicted a young boy with iconic symbols of Historic West End — such as Johnson C. Smith University and the Excelsior Club — flowing through his hair. He added a young girl to the updated design and expanded the theme to include the city’s growth.

For Steele, a west Charlotte native and board-certified visual arts teacher in Charlotte-Mecklenburg Schools, it was important to add an educational component to the mural.

“As a African American teacher, I want Black youth to see themselves reflected in a mural about the historic Biddleville community,” he said. “I also want them to see that education has been and will always be a staple in communities of color.”

Steele plans to begin work in late spring following a series of community meetings where residents can provide input on the neighborhood symbols portrayed in the final design. His goal is to complete the mural by the end of summer.

As the Beatties Ford Road corridor is rapidly changing, Steele stressed the importance of highlighting the heritage of the community.

“I want to make sure that the legacy of it being a historically African American side of town lives on and is remembered,” he said. “It really is a jewel in Queen Charlotte’s crown.”