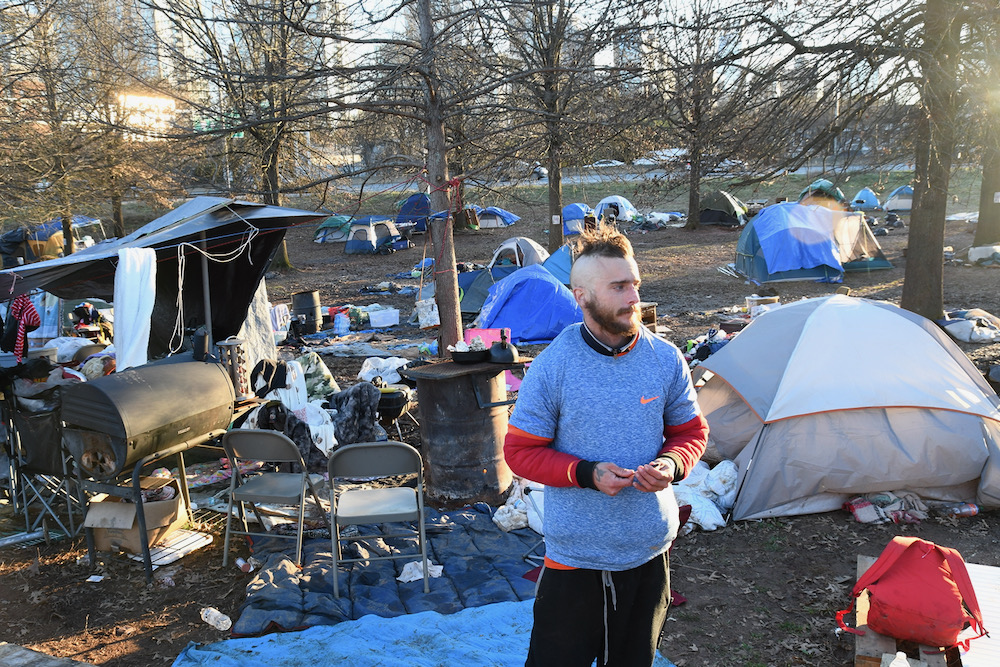 A man who identified himself as Clinton said he has seen small rodents in the homeless encampment near uptown Charlotte but didn't consider them a problem. (Photo: QCity Metro)

Mecklenburg County health officials said residents of a homeless encampment near uptown Charlotte must be cleared out within 72 hours, citing a rodent infestation that poses a public health hazard.

The encampment, known as Tent City, houses dozens of makeshift shelters and an unknown number of occupants. It sprung up seemingly overnight in early 2020, just as the Covid-19 pandemic was forcing shelters in the city to reduce occupancy and related services.

The order to vacate, officially called an Abatement of Imminent Hazard Order, was issued late Tuesday against the owners of the property. The order went into effect at 5 p.m.

“We have taken this action out of an abundance of caution to protect the health of encampment residents,” Mecklenburg Health Director Gibbie Harris said in a statement. “This type of order is rare, but sometimes necessary.”

Harris said many of the encampment’s residents have been reluctant to leave because of concerns about Covid-19.

Harris was scheduled to brief members of the Mecklenburg Board of County Commissioners Tuesday evening.

Shortly after the order was issued, a man who identified himself as Clinton was seen tending a cooking fire along a fence that encircled the encampment. Nearby, other fires combined to fill the evening air with thick smoke. Clinton told a reporter he had seen small rodents scampering around the tents but didn’t consider them a problem.

Asked how big the rodents were, he held two fingers about four inches apart. “Just small mice,” he said.

Clinton said he had lived in the encampment for about two and a half months and had not heard of the eviction order. Asked where he would go if evicted, he thought for a few seconds and then responded: “I’d follow God’s grace and his spirit as best I could, and I’d go wherever that directed me..”

Clinton said he ended up homeless and living in the encampment because of “trials and tribulations, trying to get regulated between heaven and hell.”

“Just like Meek Mill said, ‘heaven or hell,’” he added, a reference to a 2013 rap song about survival.

At Tuesday’s meeting of county commissioners, Harris called the eviction order an action of “last resort.”

In mid-January, she said, inspectors from Environmental Health went to the encampment and found unsanitary conditions, including rat droppings and smoke from unauthorized fires. Last week, she said, conditions at the camp worsened.

Harris called rodents “great carriers of disease” and cautioned that rodents at the site might migrate beyond the encampment. She also expressed concern that fires at the encampment was a potential threat to air quality.

“I don’t use imminent hazard lightly,” she said.

Meanwhile, commissioners Chair George Dunlap said the county is committed to finding a “long-term solution to homelessness.” The county’s immediate goal, he said, is to help residents impacted by eviction order, so he announced that hotel rooms would be made available starting Tuesday night.

“It is my hope that our community will continue to work together to help those affected by the transition in the days to come,” Dunlap said at the meeting. “Call 2-1-1 if you need assistance.”