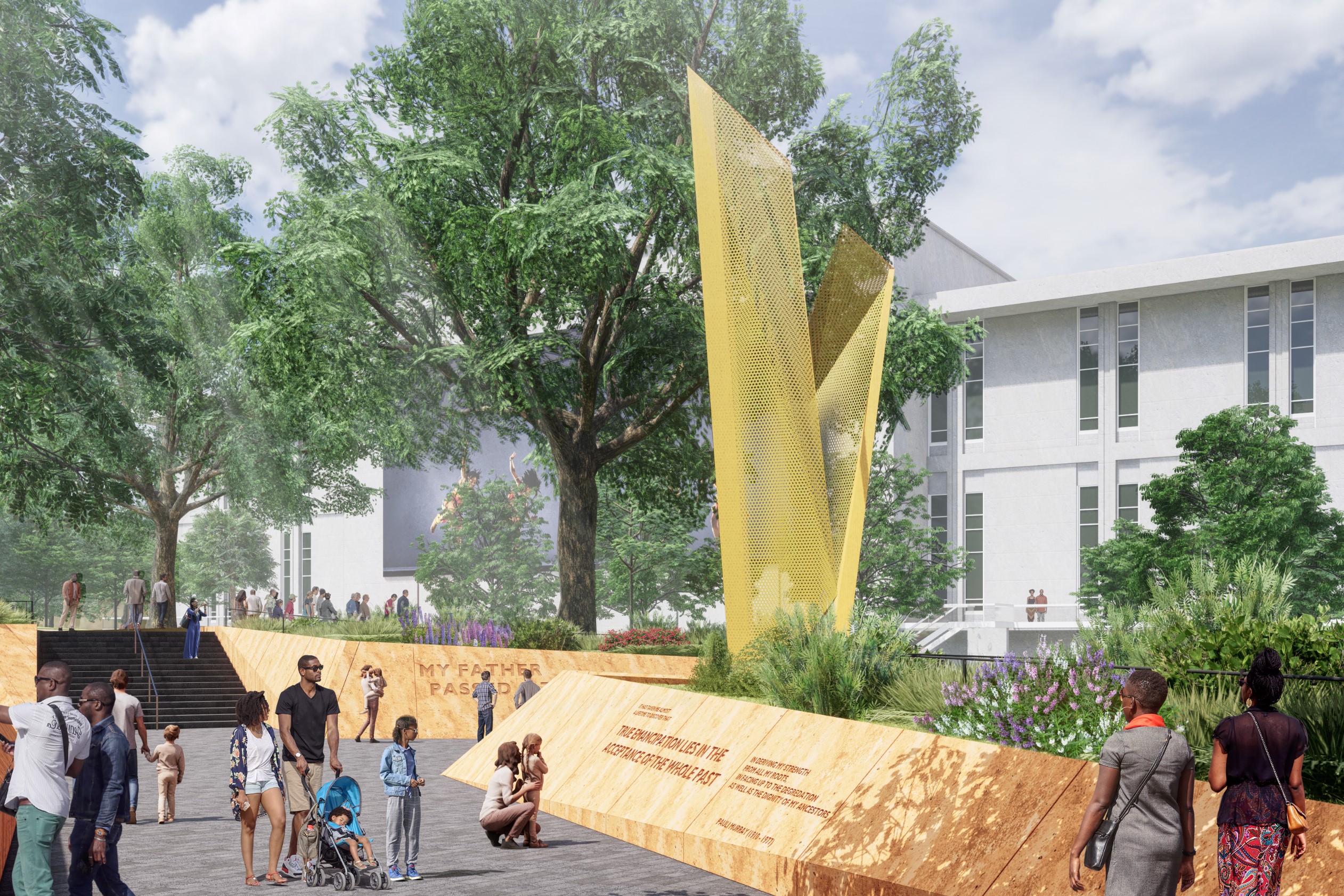 Rendering of "Beacon of Freedom" monument in NC Freedom Park in Raleigh. It will be constructed on a one-acre site located between the state legislature and Governor's Mansion. Rendering courtesy of NC Freedom Park

North Carolina will have its first monument at the state capitol honoring African American contributions, and its roots have Charlotte ties.

Located in Raleigh, the NC Freedom Park was the final project from the late Phil Freelon. The internationally recognized architect, who died in 2019 from amyotrophic lateral sclerosis (ALS), designed Charlotte’s Harvey B. Gantt Center for African-American Arts + Culture and helped design the then-Charlotte Bobcats arena.

His credits also include the Smithsonian National Museum of African American History and Culture in Washington, D.C., and Greensboro’s International Civil Rights Center & Museum, among others.

Freelon and his team at Perkins+Will designed NC Freedom Park to include a piece of public art called Beacon of Freedom. The 40-foot-tall metal structure will be the centerpiece of the one-acre site located between the state legislature and the Governor’s Mansion.

Scheduled to open in 2022, the park also will feature paths with quotes from Black North Carolinians, including:

Before state Senator Natalie Murdock held office, she ran Murdock Anderson Consulting, with NC Freedom Park as her first client. When the nonprofit board was looking for a project coordinator, she took on the role.

“When you go to other states, you’ll see something that speaks to the African American experience in the heart of their state capitol,” Murdock said. “We don’t really have that in North Carolina, and we should have something like that.”

I spoke with Murdock and Durham City Council member Pierce Freelon, son of Phil Freelon, about the park and its potential impact.

Answers have been edited for length and clarity.

Q. The official groundbreaking was in October. At that point, how long had the project been in the works?

Murdock: This project is actually 20 years in the making. But really, the last 10 years is when the project began to pick up steam. There was an understanding across the state, after having a series of town halls, that we needed to tell the story of freedom in North Carolina through the lives and voices of African Americans.

It was a few years ago when Phil Freelon and Perkins+Will came forward with the design that really stood above the rest. We were delighted to have an architect that would draw more attention to the project.

Q. Has the pandemic presented any challenges as far as moving the project forward?

Murdock: From a construction perspective, we still are where we need to be.

We are currently talking with the construction firm, in coordination with Perkins+Will, and we feel great about the timeline. We’re doing additional cost estimates to make sure that we account for the fact that the price of items can go up, which is another reason why we’re raising more funds.

Q. Councilman, can you talk about your dad’s approach and excitement about being part of this project?

Freelon: My dad passed away in 2019, and Freedom Park was his last project. It was the thing that he was thinking about, he was working on, he was moving towards as he was transitioning out of this world. He talked about it frequently as a really important and historic structure.

There are no monuments celebrating or honoring Black people at the state level. This will be the first, and he was really proud to have his mind and his team at Perkins+Will participate in building that first Black monument.

It was something he was passionate about and really hoping to be around for. And he is around. He was there at the groundbreaking; I felt his presence so strongly.

Freelon: We have a lot of reconciling to do around systemic racism in this country. Particularly in North Carolina, we’ve been wrestling with who we want to celebrate and how we want to remember the past as we build a future.

This monument, and everything from the quotes to the design to the ways that it incorporates the natural environment, I think is a really important thing for the type of North Carolina we want to build.

My dad mentioned this all the time, that the story of Black freedom and struggle is the quintessential American story, not just for Black folks. We’ve accomplished so much and our resiliency is so “lit,” pun intended. That brightness, the vibrant and luminous aspects of our being can be a light for all North Carolinians.

There are so many stories in the African American tradition that go back to light — follow the North Star, follow the drinking gourd, this little light of mine — it’s just an important aspect to our stories and our heritage. That’s what gets me excited about the project.

When I would see “The Boys who wore the Gray” and some of these other Confederate monuments, I never felt represented. So, I’m excited that right outside the state Capitol to have this beautiful landmark.

Murdock: We’re also building this project for children, so that they can see themselves. No matter what your ethnicity is, you should know your history. We’re having a lot of discussion about the whitewashing of history. When it comes to telling the story of freedom, and telling that in its fullness, it’s a story that we’re still grappling with.

Q. Regarding fundraising, how far are you from reaching the goal to complete the park?

Murdock: We are around $3.5 million raised at this point, but we do want to raise another $400,000 to complete the funding for the Beacon of Freedom. That is why the campaign is called “Light the Beacon.”

When you work on a project over a period of time, costs can go up. Most recently, we received a donation of $100,000 from the Duke Foundation.

Murdock: We’ll be having events throughout Black History Month. Obviously, with the pandemic, we want to have events that are safe.

Beginning on Feb. 17-28, folks can go on self-guided tours. Even though we’re still a little ways out from when the park will become a reality, so many people reached out and they just wanted to go to the current space.

Then on Feb. 24, we will be having our virtual fundraiser. We will be providing folks with more information about the park, how they can get involved and walking them through our virtual depiction of the park, which is phenomenal.

People can find out more information about our events, as well as links to the virtual tour, at ncfmp.nationbuilder.com.

This Story is Tagged: Black History