Can racial bias be rooted out of the state’s criminal justice system? A conversation with N.C. Attorney General Josh Stein

Stein co-chairs a state panel charged with rooting out disparities in the N.C. criminal justice system. 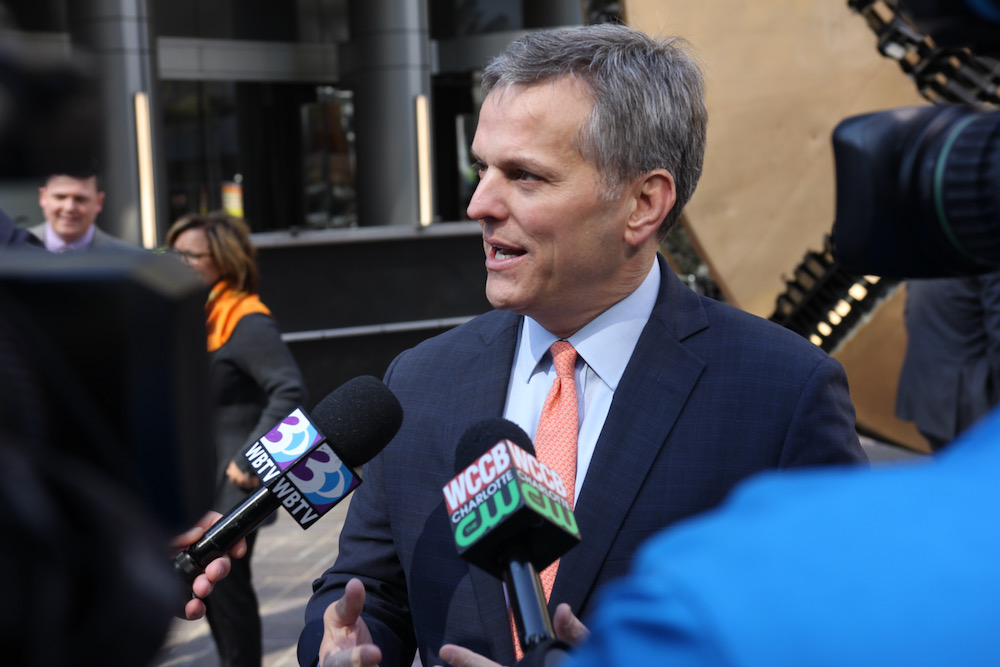 Cooper was not the only elected official to take executive action. As angry protests spread nationwide, including here in Charlotte, governors and mayors in a smattering of places appointed task forces to root out various forms of systemic racism.

“Communities of color are disproportionately affected throughout the criminal justice system,” Cooper declared in Executive Order No. 145, which established the task force. And people of color, he said, are more likely than White residents to “not have their murders solved; to be pulled over for a traffic violation; to be jailed and imprisoned at a higher rate; and to be sentenced to longer terms of imprisonment.”

On Dec.14, Cooper’s task force submitted more than 125 policy recommendations. Some focused on decriminalizing marijuana possession and revising the role of school resource officers. Others would mandate the use of body-worn and dashboard cameras by law enforcement officers.

State Attorney General Josh Stein, who co-chaired the task force (along with Judge Anita Earles of the N.C. Supreme Court) spoke with QCity Metro earlier this month about the recommendations and what happens next.

Q. We’ve seen a number of task forces over the years, often yielding no real change. Why should we believe this one will be different?

There are two reasons why I’m optimistic this task force will have a meaningful impact on the criminal justice system. First, the governor was explicit that he did not want a report from a blue-ribbon commission that goes on the shelf, but rather an action-oriented task force that not only identifies needed reforms but works for their implementation. It is explicitly our charge to try to get these things put into operation. The second is, I think as a state, and as a country, we’re in a different place. There is a much broader recognition that our criminal justice system needs improvement and can do much better in terms of treating everyone fairly, irrespective of the color of their skin.

Q. What would you tell people who are understandably skeptical that anything is going to change?

When somebody [in law enforcement] engages in serious or repeated violations, they need to leave the profession, and we need to have a statewide database to ensure that an officer with problems cannot wander from one agency to another. Should there be a police-involved killing, there needs to be an investigation by an independent agency, not from the agency in which the officer serves. If the investigation concludes that a crime was committed, then there needs to be an independent prosecution by somebody from outside the district. I believe there should be a civilian oversight board to review police practices to hold them accountable and build community trust.

Q. What does accountability look like to you in terms of state officials, who will determine whether or not the recommendations are implemented?

A number of recommendations require legislative approval, and we’re going to bring these ideas to the General Assembly and work with them to try to get them passed. I have some optimism because criminal justice reform is one of the few issues where the parties have worked together. All you have to do is look at the last session, when the Republican-led General Assembly passed the First Step Act and the Second Chance Act, both of which were positive reforms for the criminal justice system. All the changes don’t require legislation. Every law enforcement agency has the ability to establish its own policies and protocols. We are also going to work with local governments and police departments and encourage them to adopt a number of these recommendations directly.

Q. Now that the recommendations are in, what are the next steps?

The next step is to work hard for the implementations. The task force is reorganizing ourselves into four subcommittees. One is going to deal with implementing at the legislative level, another at the judiciary (level), the third at the executive branch on the statewide level, and the last one will be working with local government agencies, including local police and sheriff’s offices. It’s all about implementation.

Q. What are the timelines for implementation?

We’re doing this work as we speak. We’re having our first meeting in a week or two. We’re already doing the strategic thinking about who we need to reach out to, how we’re going to reach out and who’s going to do the contacting. When the governor created the task force, he created it to live for two and a half years. The first half of the year was what we did in 2020, developing the recommendations. The next two years are primarily about trying to get the recommendations put into practice.

Q. What will be the Governor’s role?

He has staff that works with us, but his primary role was in creating and identifying the membership of the task force and giving us our charge. Now he wants to do whatever he can to support our recommendations. He’s been a great leader on this.

Q. Many of these recommendations can’t be implemented by decree. How can you get local police departments, courts, etc. to buy into this?

Well that’s the work in the next two years. We’re going to work closely with the North Carolina Association of Chiefs of Police and the North Carolina Sheriffs’ Association. We also have police chiefs and sheriffs here on the task force, and they’re going to help us reach out to their colleagues to bring a number of these ideas to their consideration and implementation.

Q. A growing number of states have either legalized or decriminalized marijuana. Would you be in favor of doing either in North Carolina?

We made a number of recommendations regarding marijuana. Although marijuana is smoked at similar rates by Black and White people, the law is disproportionately enforced against people of color. We believe that possession of marijuana should be decriminalized and treated as a civil infraction, not a crime. We also think that people who have criminal records of marijuana possession should have those records expunged so that they’re not held back because of it. To legalization, that is a really complex question, and we suggest that the legislature create a special commission with public health, public safety, racial equity, agriculture and all of the relevant perspectives represented to first decide whether we should legalize marijuana in North Carolina. And if so, how do you regulate the possession, sale and cultivation of marijuana?

Q. Do you personally think marijuana should be legalized in North Carolina?

I think we need to make sure that if we legalize it that it’s done in the right way. I strongly support decriminalizing marijuana and not creating unnecessary criminal records for people.

Q. We just saw a violent protest in Washington that involved mostly White protestors. They were treated very differently than many of the Black Lives Matter protestors we saw last summer.

We have a recommendation that speaks to the facilitation of peaceful protest and how to encourage the statewide criminal justice system to come up with the best practices that local police departments can use in their offices. Because clearly, when people are [expressing] their First Amendment right, they need to be protected, and that should be supported. What is not permissible is when there’s vandalism, or in the case of Washington, D.C., an invasion into a public building. How we interact with a peaceful protest can actually have an impact on the direction of the protest and whether it turns violent or not. If they handle it appropriately, it can reduce the chances of later conflict.

Q. The report mentioned revising the role of school resource officers. What would that look like?

We are concerned about children being referred to the criminal justice or juvenile justice system for issues that are better handled by school administrators and parents. We also believe that the age of juvenile jurisdiction needs to be increased from six to 12 years old. Right now, North Carolina has the youngest age juvenile justice system in the country. We’re the only state where a 6-year-old can be referred to the juvenile system, and we think a better policy would be 12 years old to 18 years old.

Q. How can the public help ensure that these recommendations come to life?

The public played a critical role in the development of these recommendations. We’ve heard from hundreds of North Carolinians and incorporated many of their ideas and suggestions. Similarly, the public will play an incredible role in getting these ideas put into operation. That means reaching out to your town and city councils, your police, your sheriff and your state legislators.

Q. Will there be a process where individuals in grassroots organizations can respond to these recommendations?

Absolutely! There is a portal on our website where anybody can comment about anything, either suggest making new recommendations or they can offer their perspective on the recommendations we’ve already made.

Q. Is there a question I didn’t ask that you wish I had?

This really is a critical moment where there’s widespread recognition that Black people and White people have not been treated the same by our criminal justice system, and that’s absolutely unacceptable. The words on the face of the U.S. Supreme Court Building is “equal justice under law,” and that has been our North Star in this work. We want to do everything we possibly can so that every North Carolinian is treated fairly and equally, no matter who they are or the color of their skin.